Some Mysterious Facts About Bees! 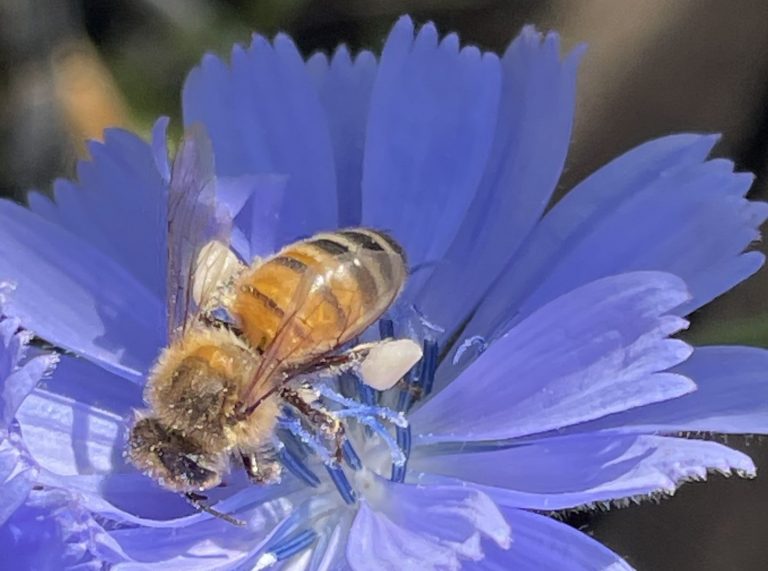 It's a wonderful sight seeing bees thriving in your garden. (Image: Trisha Haddock via Nspirement)

A few bees move about like they’re dancing from flower to flower on the potted fennel plants. My observation of some of the mysterious facts about bees has occurred while gardening daily for over roughly the last four years since Helen Jukes held a promotional event at the Melbourne’s Writers Festival for her book A Honey Bee Heart Has Five Openings. Helen captivated her audience, giving everyone some insights into how a bee views the world. The population of bees and how their numbers have receded was also discussed, bringing to mind the low numbers of honey bees in our local area, Warrandyte. The low number of bees was concerning. It’s a wonderful sight to see the bees thrive in the garden today.

Many countries have had a significant drop in bee numbers. This can have a catastrophic effect on large crops that need bee pollination. Bees are threatened by other predator insects, diseases, and cold weather. Also, an environment with a lack of flowering plants can create a low count of bees. The Warrandyte area seems to grow few flowers in Autumn and Winter. The colder months can be too chilly for the bees and they all could die in the hive.

“With wintry weather forecast, this might be my last glimpse of them for a while. At the base of the hive, a small heap of shriveled-up bodies lies scattered across the concrete block. These are male drones, expelled from the hive and left to die of starvation rather than consume anymore precious resources. The colony is ridding itself of surplus, reducing down to a core body of workers and the queen until spring arrives. She will then begin laying eggs and the colony will expand again.”

A Honeybee Heart Has Five Openings by Helen Jukes

Adding purple-flowered varieties of lavender and plants from the Brassica family, such as broccoli, cabbage, and cauliflowers, can help the bees since these flowers and vegetable plants have varieties that will grow and flower all year round. Kailaan broccoli (Chinese broccoli) is a good one to choose. The bees love it!

In hot and dry regions where there is a lack of water for bees to drink and only a birdbath in the garden with a deep basin and nothing to land on, the bees can drown. Putting a rock in the birdbath gives easy and safe access to the water. Another idea is to hang a piece of cloth or rope on the side of a container filled with water. This will attract many bees on hot days. They will lap the water up off the wet rope or creep to the end for a drink.

Creating an inviting place for bees will help them to collect sticky pollen and as they get some stuck to their tiny feet and body, a trail is left behind from flower to flower pollinating the plants.

“Bee eyesight spans a different part of the color spectrum from ours; They see more blue than we do, and many insect-pollinated flowers have evolved to bloom in Blues and Purples to make themselves more visible to bees.”

A Honeybee Heart Has Five Openings by Helen Jukes

Some mysterious facts about bees

Bees have ultralight eyesight and they only see the colors yellow, green, blue, and purple. Choosing plants that have flowers of these colors will attract more bees into any garden. Keep in mind that a bee’s eyes can only see red as black. We planted some Hyssop, Fennel, Pumpkins, Radicchio, Forget-Me-Nots, violet-colored pansies along with lavender and Brassica varieties and greatly increased the bee visitors to our garden. The combination of flowering plants that are visually interesting to bees along with the existing plants of Agapanthus and some native white wax flowers is like a brightly colored welcome sign for many bees to come.

At Helen Jukes’s book launch, she gave an explanation of how a bee perceives a white flower. White flowers have adapted to have a kind of landing strip on their petals that only bees can see. I can often see many bees crawling over my white waxflower bush with its abundance of small white flowers. The white Agapanthus doesn’t miss out either as they jump from purple to white-flowered plants and then crawl into the center of the flowers to find pollen.

Helen Jukes documented her time learning about how to be a beekeeper and her experience of keeping bees with her friends. In A Honey Bee Heart Has Five Openings, Helen shares many interesting bee facts along with what she has learned from historic beekeepers and her understanding of the personal connection people can have with bees when being a beekeeper. After reading Helen’s book, the thought of owning a beehive of one’s own might arise.

Owning a beehive for producing honey will take some observation skills. It’s important to know what insects prey on bees and what kind of health your bees are in. In irregular weather conditions where temperatures drop to 43°F-53°F with rain and strong winds, bees are not able to nurture their brood. Chalkboard disease is a fungus that bees in Australia can be infected with and it is potentially deadly to them. Beekeepers feed their bees sugar syrup to help them overcome the fungus.

The Varroa mite wiped out 2.5 million bees in the U.S. in 1993 when it first appeared. This mite bites into the honey bee and attaches itself to it, whilst also infecting the bee with a virus. From the wound oozes the deadly deformed winged virus and the bee then spreads the virus throughout the hive. There are chemical treatments for this parasite or you can sprinkle powdered sugar onto the bees. When the bees begin grooming each other they will remove the nasty mite.

The Varroa mite used to be able to survive on only one type of bee. Originally, it was found on Asian honey bees, Apis cerana, but the mite found its way through human spreading to other countries, and the honey bee, Apis mellifera, is now vulnerable to attacks. More research is being conducted by Dr. John Roberts.

Predators lurking around the beehive try to sneak past the defending worker bees. A beehive with low numbers is in danger of being wiped out by an attack. A big army to defend the hive from wasps or hornets is important. You might need to give the bees some assistance until there are enough worker bees to protect the hive and the honey! Wasp traps can be purchased or homemade ones can be used to remove the wasps. The wasp is closely related to the hornet and fortunately, there are no hornets in Australia.

The Asian hornet, Vespa velutina, can be found in Tropical Asia, Europe, Africa, and now it’s been sighted in North America. The Asian hornet is particularly troublesome and will kill honey bees to feed them to their own brood larvae. In 2003, the Asian hornet escaped the land of its origin, Japan, and moved into China, where it then found its way to France in 2004. It’s capable of moving rapidly across the globe, decimating bee colonies on its way, and has become known as the Murder Hornet.

Asian hornets were found in the U.S. in Washington state in 2020 and residents were asked to report if they found any of these hornets. These hornets can kill a large number of bees, putting at risk blueberry and raspberry crops that depend on bees for pollination. The Washington State Department of Agriculture found the first nest and it was demolished, killing 500 hornets and 200 queen hornets.

The bees in Asia have learned self-defense tactics. By smearing their hive with animal feces, they can deter the deadly pest. Another tactic is for the worker bees to act in mass numbers to smother the hornets by quickly vibrating their wings, heating the air to 115°F until the hornet roasts to death.

Bees are amazing when you get to know them better. They provide us with delicious honey and are a critical part of plant food production, both on a large scale for commercial growers and on a small scale in your own garden.