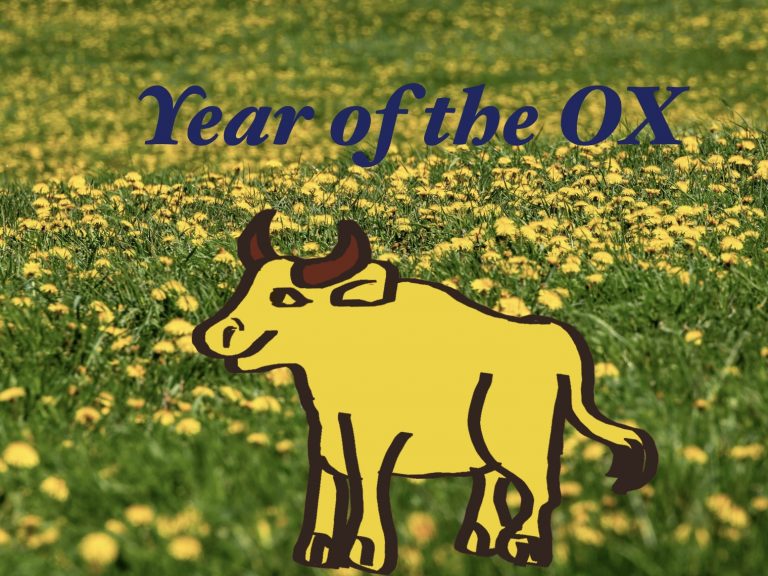 The Ox is the second sign of the Chinese zodiac wheel. The Metal Ox comes around once every 60 years. It is time to be steady and solid. (Image: David Yang via Nspirement)

Chinese New Year is approaching this February 12th and 2021 is the Year of the Ox. It looks to be a favorable sign, which is exactly what we want to hear as some of us very cautiously enter this new year. Good-bye year of the metal rat 2020.

What does the year of the Ox represent?

The positive attributes of an Ox are not just found in the Chinese Zodiac. The Ox is a highly-regarded, deeply symbolic animal in eastern art, religion, and literature.

The Ox is gentle and trustworthy, a grounded and loyal animal that denotes discipline, strength, endurance, positivity, and honesty. The Ox can save us from disaster and help us rebuild because the Ox is a builder. Its element is earth, which represents stability and nourishment. The Ox helps us plow the fields, plant crops, and harvest our food. It is itself also a source of food, milk, and clothing.

In feng shui, the Ox is known to grant wishes. The Ox is seen in such a positive light due to its ability to self-sacrifice and serve mankind, and for this reason, it is commonly used in Korean proverbs.

The Ox was seen as ‘Buddha-nature’ in ancient times

Statues of an Ox and imagery in temples are found in many religious places in Japan, the symbolism of the Ox in Buddhism stems from Daoism — a philosophical practice originating in China. In Buddhism and Japanese Buddhism, the Ox represents “Buddha-nature,” a nature we all have in us. Therefore, in the Year of the Metal Ox, we can look forward to having more self-reflection and gaining greater enlightenment.

Ten Scenes with an Ox is a Zen Buddhist parable made up of illustrations with text that was originally attributed to an 11th-century Song Dynasty Chinese Zen Master. It was recreated in the 15th century by a Japanese Zen monk. The story is about a shepherd boy who loses his Ox. He follows its tracks to find the animal. In the second to the last verse, he transcends the world and achieves enlightenment.

Chinese Zodiac and the Metal element in 2021

The five Taoist elements are Fire, Earth, Metal, Water, and Wood. 2021 is a metal year, and autumn is the most favorable season in a metal year. Metal is linked to the lungs and large intestines, white color, white food, and pungent tastes and flavors. In Feng Shui, metal represents cleanliness, like the shine from a metal surface, and the bedroom is where to focus this the most, as the ox is hardworking and does best after a peaceful sleep.

Here’s wishing you goodwill for 2021 with all the strong will in the Year of the Ox.