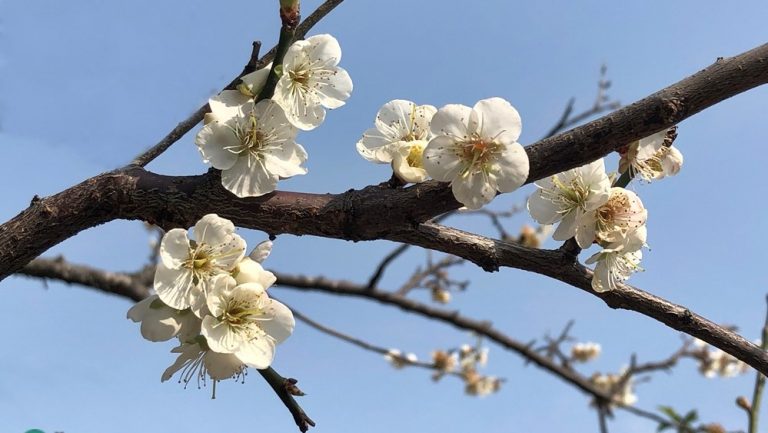 Taiwan is known for its beautiful plum blossoms. (Image: Billy Shyu via Nspirement)

Winter is a good time to enjoy plum blossoms in Taiwan. There are many popular places across Taiwan that are famous for plum blossom appreciation. Among them are plum tree farms in central Taiwan’s Nantou County and some public parks in Taipei City.

In Nantou County, Xinyi Township and Renai Township are often referred to as the home to plum blossoms. The plum trees in Xinyi Township span about 1,500 hectares (3,706 acres) and approximately 80 percent of them are concentrated at Fengguidou in Ziqiang Village. Additionally, Lona Village, Taiwan’s largest aboriginal community adjacent to Ziqiang Village, is also a popular destination for viewing plum blossoms.

In Renai Township, there are about 50 hectares (124 acres) of plum trees, which are mostly concentrated at Qingliu, Zhongyuan, and Meiyuan Tribal Settlements in Huzhu and Xinsheng Villages.

The iconic Chiang Kai-shek Memorial Hall Park in Taipei City is known for its beautiful plum blossoms in northern Taiwan. With an area of approximately 25 hectares (62 acres), the Park is planted with around 200 plum trees in three distinctive categories: ornamental plum trees, pure fragrant plum trees, and edible plum trees.

Pure fragrant plum trees have white and pink blossoms. The blossoms are rather smaller, but they are quite fragrant. They are cultivated by the Agricultural Research Institute of Taiwan’s Council of Agriculture.

Edible plum trees’ blossoms are white, rather smaller, and will develop into fruit. As their fruit is sour and bitter, it cannot be eaten directly. It is mostly processed into plum preserves and fruit vinegar.

There are more than 100 plum trees planted on the two sides of the Residence’s Rose Garden, which was favored by Generalissimo Chiang Kai-shek and his wife Madame Chiang when they lived there from 1950 through 1975.

Since many of the plum trees in the Shilin Official Residence are decades old, the sight of the plum blossoms there is as elegant as what is commonly seen in traditional Chinese paintings.

Special meaning of the plum blossom

According to traditional Chinese culture, the plum blossom symbolizes the spirit of resilience in the face of adversity. It is the national flower of the Republic of China (Taiwan), and the flower of Nantou County. On the other hand, it is also the corporate logo on the airplanes for Taiwan’s national flag carrier, China Airlines.

In fact, The Plum Blossom (méi huā) is a popular patriotic song in Taiwan due to the meaningful connotation of the flower. It is the theme song for the Taiwanese film Victory (梅花) produced in 1976.
Follow us on Twitter, Facebook, or Pinterest