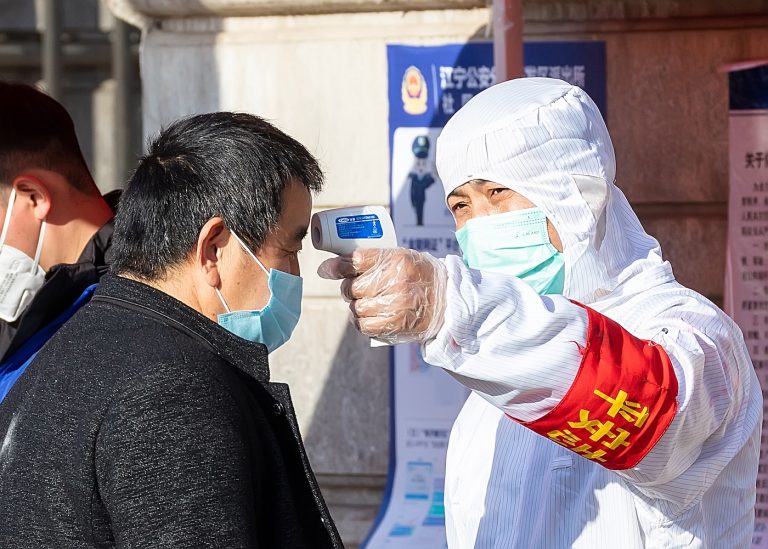 A file image of a man getting his temperature read in Jiangning District, Nanjing City, in China’s Jiangsu Province. (Image: Ralf Liebhold via Dreamstime)

A Chinese man who lost his father to the coronavirus has called upon the World Health Organization-led (WHO) team visiting the city of Wuhan not to “become a tool to spread lies.”

Zhang Hai’s father died on February 1 last year after traveling to Wuhan, where he was infected with the virus, reported AP.

More than a year after the virus erupted, a team of WHO researchers arrived in the city on January 27 to try and investigate its origins. Reuters has described the WHO team as being tightly controlled by its Chinese hosts.

“I hope the WHO experts don’t become a tool to spread lies,” said Zhang, who is a Wuhan native now residing in the southern city of Shenzhen. “We’ve been searching for the truth relentlessly. This was a criminal act, and I don’t want the WHO to be coming to China to cover up these crimes,” he said.

Communist authorities have long been accused of covering up the virus outbreak that has now killed more than 2 million globally.

Reports from both AP and AFP said that Zhang has been uniting relatives of CCP virus victims in mainland China to demand officials’ accountability.

Zhang said he and others who lost family members have been interrogated and pressured against speaking out and told not to talk to foreign media.

Zhang said a social media account they had focusing on their plight was taken down by the authorities not long after the WHO team arrived in Wuhan. The closed WeChat group was used by 80 to 100 family members, Zhang said.

“Don’t pretend that we don’t exist, that we aren’t seeking accountability,” Zhang said. “You obliterated all our platforms, but we still want to let everyone know through the media that we haven’t given up.”

AFP reported that several Wuhan relatives attempted to file lawsuits pursuing compensation and call for officials’ punishment, but they said that the courts refused to accept them. The judicial system in China is another branch of the Chinese state and is subject to the whims of communist authorities.

WHO experts called on to meet family members

Zhang called on the WHO experts to “bravely” meet with the family members of those who died; he added it was likely that the UN agency’s investigators would be misled or obstructed by the authorities. He said that the next-of-kin had knowledge that could aid with investigations, but he recognized that such a meeting would be unlikely.

Reuters reported on January 30 that WHO said its researchers would be limited to Chinese officials’ visits and would not have any contact with community members in Wuhan due to health restrictions.

Zhang also told Human Rights Watch (HRW) earlier that he has spoken out publicly and attempted to redress the situation through legal action, but the authorities have continually harassed him.

“Government minders followed him on the street, and his social media accounts were suspended. The police warned him that he would be detained if he kept speaking out,” HRW said in a statement in early January.

The rights group said that the authorities have harassed and intimidated those who have sought accountability for the government’s initial coverup of the pandemic and abuses stemming from lockdowns.

HRW said that since the outbreak in Wuhan, authorities had detained several citizen journalists who reported from the city, adding that a court in Shanghai sentenced Zhang Zhan to four years in prison after convicting her of picking quarrels and provoking trouble.

The rights group said that the situation and whereabouts of Fang Bin, a businessman in Wuhan who has been detained for posting videos of the city hospital, remain unknown.

According to figures put out by the government, more than 4,000 people in China have died from the virus, but many commentators have estimated that the actual number is much higher. The authorities have tried deflecting blame over the pandemic, saying — with zero evidence — that the virus’s origins are from outside of China.