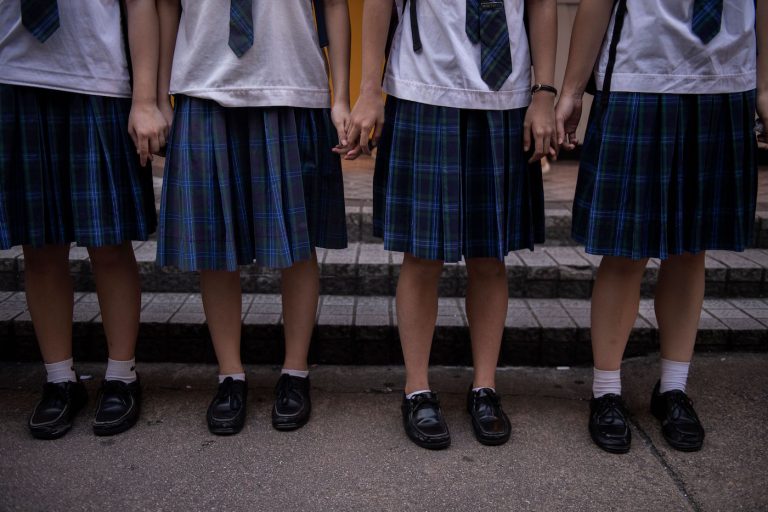 Hong Kong’s controversial National Security Law is making itself further felt, this time in the city’s schools with a drastic revamp to the education that includes instigating a pro-Beijing curriculum that includes the targeting of liberal studies.

Included in new measures issued February 4 are an increase in monitoring of teaching staff as well as a requirement that political activity deemed “illegal” under the Chinese Communist Party (CCP) imposed National Security Law needs to be reported to the police.

“Schools should watch out for political propaganda or disturbances caused to teachers and students in the vicinity, such as the chanting of slogans, distribution of leaflets and setting up of street counters, etc,” said a notice for the new requirements issued by the city’s Education Bureau as seen on the Hong Kong Free Post website.

“Schools should dissuade their staff and students from joining those activities. If necessary or suspected illegal acts are involved, schools should consider seeking assistance from the police community relations officer/ school liaison officer of the police district concerned. In case of a grave/ emergency situation, schools should report to the police immediately,” it said.

“Schools should ensure that the display of words or objects within the campus (including school buildings, classrooms and bulletin boards, etc.), such as books (including library collections), publications and leaflets does not involve contents that endanger national security.”

Radio Free Asia reported that under the changes that teachers will be required to substitute liberal studies with “national education” promoting the People’s Republic of China under the CCP’s rule.

Students as young as six will also be taught under the curriculum and as part of the push, an animated video aimed at young children called Let’s Learn About National Security has been released.

Schools are likewise encouraged to “organize various game activities, such as puppet theatre, board games, creating picture books … to establish a good atmosphere and improve students’ understanding of national security.”

Both university and high school students were at the vanguard of the protests. Students likewise led the sit-in street protests known as the Umbrella Movement in 2014. Two years earlier, students protested what would be a failed attempt to introduce “patriotic education” in Hong Kong.

To implement the new curriculum schools need to “form a relevant working group or assign a dedicated person” who would be responsible for implementing the “measures related to safeguarding national security and national security education,” said the Education Bureau notice.

“Such working group or dedicated person should keep monitoring the implementation of relevant measures and report the progress to the school governance authority on a regular basis,” it said.

While they have different curriculums, international and private schools are also expected to comply with the new measures. National security education is also being promoted at universities.

Ip Kin-yuen, the vice president of the Hong Kong Professional Teachers’ Union told The Guardian that the new guidelines would likely lead to anxiety and self-censorship among educators.

“It stresses that everyone from the school administration to the teachers will be held accountable for what’s happening in schools and classrooms,” he said.

“It’s very high stakes, people might get themselves into trouble if they say something considered to be wrong.”

One Hong Kong teacher told Radio Free Asia that he was considering emigrating because of the new measures.

“How can I teach without my principles? Why would I even stay [in Hong Kong]? It would be better to take the plunge and try to make a new life somewhere else, rather than to carrying on teaching as an accomplice [of the authorities], wasting my students’ time,” said the teacher identified by the surname of Au.

“Wouldn’t I just be hiding the truth from them if all I’m allowed to do is sing the government’s praises, but never say a negative word about it? This goes against the whole point of education,” the teacher said.

The new school curriculum is the latest move by pro-Beijing authorities to quash opposition in Hong Kong and to influence the political beliefs of the city’s people. The draconian National Security Law was imposed on Hong Kong in June of last year.

Watch this Financial Times video below on how the National Security Law is changing Hong Kong: