The ‘Terrain’ of Disease: Limitations of Germ Theory 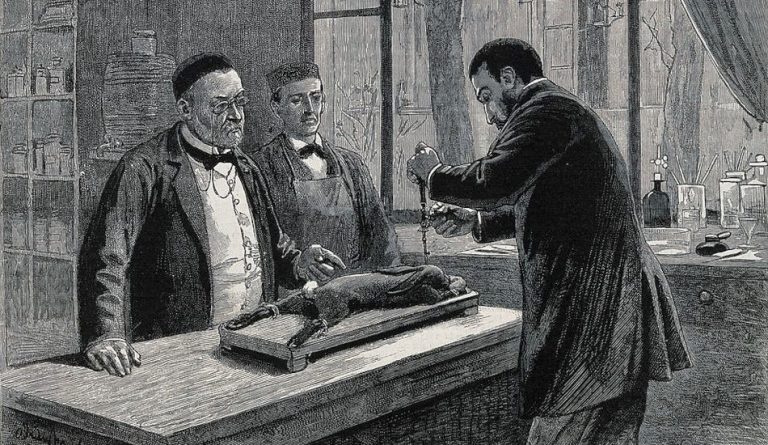 Louis Pasteur, father of the germ theory, is seen here supervising the injection of the rabies virus into a rabbit's brain. (Image via wellcomecollection.org)

In 1864, French chemist Louis Pasteur fathered the science of bacteriology and the germ theory of disease causation – one of the cornerstones of modern medicine. The process of Pasteurization is named after him. Yet after a lifetime of work with the germ theory, Pasteur himself, on his deathbed, is credited with having said: “I was wrong. The germ is nothing. The terrain is everything.” By terrain, he meant the internal balance of the body — the health of the cells and the immune system.

Before the discoveries of Pasteur, medical science was a disorganized medley of diversified diseases with imaginary causes, each treated symptomatically rather than at their root. Up to this time, medical thought had evolved from being based on ancient shamanism, superstition, and religion, with the idea of invading entities and spirits. The profession searched in vain for a tangible basis on which to base its theories and practices. Pasteur then gave the profession the “germ.”

The germ theory states that diseases are due solely to the invasion by specific aggressive microorganisms. A specific germ is responsible for each disease, and micro-organisms are capable of reproduction and transportation outside of the body.

In the medical rationale for viral disease causation, we are told to believe in obligate reproduction, where one organism (the cell) is obligated to reproduce an alien organism (the “virus”). Nowhere else in nature, however, does any living thing reproduce anything other than its own kind. Viruses cannot replicate themselves — they supposedly depend entirely upon “obligate reproduction” — meaning, reproduction by a host organism — something totally unheard of in all biology.

Back to the conventional medical theory, which explains that viruses (merely lifeless fragments of mitochondrial generic debris) come from dying cells that they have infected — the virus “injects” itself into the cell and “commands” it to reproduce itself, and this occurs until the cell explodes from the burden. Viruses are then free to seek out other cells to repeat the process, thereby infecting the organism.

Virologists admit, however, that although viruses are distinctive and definitely organic in nature, they have no metabolism, cannot be replicated in the laboratory, do not possess any characteristics of living things, have no faculties for actions of any kind — no nervous system, no sensory apparatus, and no intelligence that may coordinate movement or “bodily invasion” (of any kind) — and, in fact, have never been observed alive!!

All disease comes from a healing crisis

Modern-day complementary and alternative medicine practitioners believe that degenerative diseases are the result of acid waste build-up within weak cells and organs that are too weak to clean house. Bacteria found in the body assist in breaking down toxic substances and preparing them for elimination, but the wastes produced by the bacteria themselves are also virulent substances. Once they accumulate to a certain point, the body initiates a healing or cleansing crisis.

According to the theory, a healthy condition depends upon a high level of electromagnetic negative charge on the surfaces of tissue cells. Acidity is the opposite charge and dampens out these electrical fields. Since the bacterial waste products are acidic in nature, cellular metabolism will cease and oxygen deprivation will occur. Acidity and lack of oxygen are the ideal environmental conditions for morbid microforms to flourish and these then produce the primary symptoms of diseases.

To clarify: This would mean that the underlying causes of cancer, heart disease, arteriosclerosis, high blood pressure, diabetes, arthritis, asthma, allergies, psoriasis, and other skin disorders, indigestion, diarrhea, nausea, obesity, osteoporosis, etc., are the accumulation of acids in tissues and cells, poor blood and lymph circulation, and poor cell activity due to toxic acidic residues accumulating around the cell membrane that prevent nutritional elements from entering the cell.

And the name of the particular disease depends upon the location of the deposits of this acidic, toxic, pustulant soup. If the accumulating deposits are in the joints, it’s called arthritis. If the poisonous waste matter accumulates in the pancreas and saturates the beta cells that synthesize insulin, it’s called diabetes. If the toxic sludge is dumped into the lungs, it’s called chronic obstructive pulmonary disease. Wherever your weakest link in the chain of organs is, that’s where your genetic disposition for disease will be.

If it is our own internal biological and physiological terrain that determines our state of health or disease, then our focus needs to shift away from germs. Like mosquitoes to a swamp, it’s more about what they are drawn to — a dirty, stagnant terrain.

Mosquitoes seek the stagnant water, but they don’t cause the swamp to become stagnant.

This suggests that we must clean out our body’s backed-up inner terrain and remove the toxic cellular waste in order to experience true health and vitality.

Humans are always “infected” with bacteria and viruses, as they are present in the body at all times — therefore, one cannot say they “invade” the host. Could it be that diseases are not actually infections? Rather, could they be looked at as body purification processes brought on by a healing crisis? Such a process helps eliminate the dead matter from the body and, likewise, the bacteria and germs aid in clearing toxic substances. Bacteria have an important role to perform in the vital process of healing. Germs take part in virtually all disease phenomena that require the disintegration of refuse and toxic matter within the body that the system is endeavoring to remove. They act as scavengers in clearing up the affected area of toxic saturation. As soon as their role is complete, their numbers decline.