Visit This Traditional Korean Tea House With a Conscience 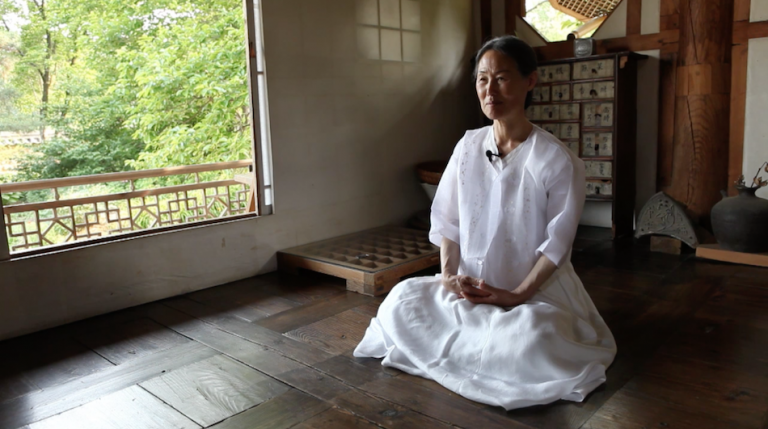 One of the most beautiful things about Seon Byeong-guk House is one of the owners — Hong Yongchee. (Image: Jarrod Hall via Vimeo)

At the base of Songnisan Mountain, about a 3.5-hour journey from Seoul, South Korea, lies a very unique, traditional Korean tea house. It was built in the 1920s during the Joseon Dynasty by Seon Byeongguk.

The building lies in the middle of Sanmgacheon Stream, which flows from Songnisan Mountain, and is surrounded by farmlands and the peaceful Songnisan National Park.

The layout of the building resembles a lotus flower floating on water, and it is known to have incredible feng shui. It is perfect for a day trip, but you also have the option of spending the night there too. If you are looking to escape technology and experience a taste of what traditional life was like in the past — this place is for you.

The Korean government has registered this Korean tea house as “Important Folklore Material No. 134,” and it was also considered, at one point, as a potential house of parliament.

The most famous tea served at the Korean tea house is jujube tea — a tea made out of dates. And on special occasions, lotus tea is served — a tea made from real lotus flowers soaked overnight.

Inside the main house, a pair of massive horizontal tree trunks support the roof. The twisting tree trunks are polished to show the beauty of the wood and are said to resemble two oriental dragons.

Yongchee runs the Korean tea house — which is her husband’s ancestral home — and has never lived in a modern house.

She dresses in Hanbok (traditional Korean clothes), keeps a vegetable garden that feeds everyone, and practices Falun Gong — an ancient Chinese qigong practice that follows the three principles of truth, compassion, and tolerance. She practices the gentle exercises every morning.

This Korean tea house has a conscience

The featured video, by filmmaker and photographer Jarrod Hall, is about her life caring for this traditional building, and how she is an advocate for human rights issues in China. She reaches hundreds of travelers from all over the world each day, letting them know about Falun Gong and the human rights abuses against its practitioners in China.

One hundred million people used to practice Falun Gong in China, until 1999 when the Chinese Communist Party became fearful of the number of people practicing. This is when they started the brutal persecution of the practice.

Some Chinese tourists try to avoid her when they see the flyers about Falun Gong, as some of them think that they will get into trouble for reading one. But Hong Yongchee approaches them individually to let them know about the truth of the situation happening in China.

Choi Heesu, a tea house visitor, said after learning the truth from her visit to the tea house:

“It’s so terrible, it reminds me of awful atrocities committed in the past. We never hear about this persecution on the TV news, or in the newspapers. Why isn’t it being reported more widely? When I heard about the persecution of Falun Gong, that was my first thought — I just couldn’t believe it.”

The video ends with some final words from the Korean tea house owner, Hong Yongchee:

“I want everybody in the world to know the truth, I want everyone to join the campaign to stop the persecution of Falun Gong. If a person is not allowed to practice truthfulness, compassion, and tolerance — what is left?”