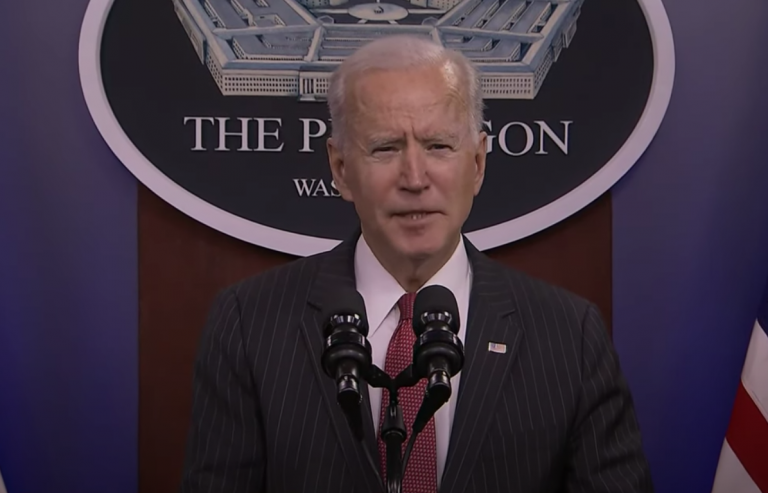 The administration of President Joe Biden has been stepping up efforts to rally U.S. allies and partners to counter China. (Image: via U.S. Department of Defense)

The Biden administration is signaling it is prepared to confront — and when necessary, militarily counter — the People’s Republic of China (PRC), as Beijing continues to challenge Washington for primacy on the global stage.

Biden used his first visit to the Pentagon as commander-in-chief on February 10 to announce the formation of a new Defense Department China Task Force, charged with reexamining high-priority topics including strategy, operational concepts, technology and force structure, and intelligence.

The China Task Force, which will be led by Special Assistant to the Secretary of Defense Dr. Ely Ratner, will include up to 15 members sourced from a wide swath of the department and include the Office of the Secretary of Defense, the Joint Staff, the services, the combatant commands and representatives from the intelligence community.

The China Task Force will be a ‘whole-of-government’ effort

The China Task Force will present recommendations to New Secretary of Defense Lloyd Austin within four months to “chart a strong path forward on China-related matters. The China Task Force will work quickly, joining our civilian and military experts across the department to provide, within the next few months, recommendations … key priorities and decision points,” Biden said.

“That will require a whole-of-government effort, bipartisan cooperation in Congress, and strong alliances and partnerships. That’s how we’ll meet the China challenge and ensure the American people win the competition of the future,” Biden added.

At his Senate confirmation hearing last month, Austin said he agreed with a recent Pentagon report that said China’s ambition is to develop a military that is equal to, and in some respects superior to, that of the United States by 2050. “While that may be their goal, I would … intend to make sure that never happens,” Austin said. “They are working across the spectrum to compete with us. We have to make sure that we begin to check their aggression,” he added.

Biden administration officials have previously warned that the need to confront China extends beyond the military and economic spheres, emphasizing that Washington must work equally hard to compete with China’s sales pitch to the rest of the world.

“China is essentially making the case that the Chinese model is better than the American model,” national security adviser Jake Sullivan said during a virtual forum last month. “They’re pointing to dysfunction and division in the United States and saying, ‘Take a look at that. Their system doesn’t work. Ours does’,” he said.

Engagement with US allies

In competition with China, Biden stressed the need to engage with U.S. allies, both in Europe and in the Asia-Pacific region.

Biden’s advisers say he will seek to end “artificial trade wars” with Europe and would immediately consult with U.S. allies before deciding on the future of U.S. tariffs on Chinese goods, in a bid for “collective leverage” against Beijing.

Biden is also expected to attend international forums for countries in the region, such as the Association of Southeast Asian Nations, or ASEAN, and the East Asia Summit, where he will make the U.S. case directly to foreign leaders in the region.