Ancient Paths to Riches: Indian Vase of Virtue and Aladdin’s Lamp of Arabia 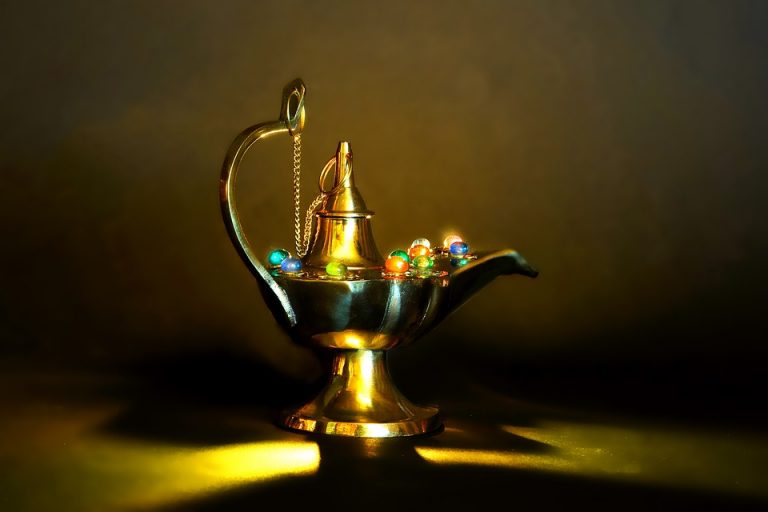 Legend has it that Aladdin's Lamp of Arabia and the Vase of Virtue of India guided the pathway to virtue and riches. (Image: Schwoaze via Pixabay)

The Vase of Virtue and the Divine Lamp are two different artifacts, each guiding different pathways to riches in the legends of ancient India and ancient Arabia. Two different cultures with different beliefs and ethnic groups, but both represent the same universal values.

Vase of Virtue: dreams and riches

In ancient India, a very poor man managed to retain his devotion to the God of Heaven for more than 12 years. Eventually, the god took pity on the man and appeared before him in person. “What do you want?”, asked the god. The poor man replied: “I wish for wealth and riches. I want all my wishes to come true.” So the god presented him with the Vase of Virtue and told him: “Everything you want will come from this vase.”

With the Vase of Virtue now in his possession, everything the poor man wished for became his: a luxurious home, horses, a magnificent carriage, and many precious treasures filled his coffers — silver, gold, onyx, and many other gems and precious metals.

His friends and others were very curious about how quickly his fortune had changed. A guest at his beautiful new home one day asked him straight out: “You were so poor, but you have suddenly become so rich. How did it happen?” The poor man was honest and replied: “I was given the Vase of Virtue. It gives me anything I want — all my wishes have come true and this is how I’ve become so rich so quickly.”

“Can you show me the vase?” asked the guest. The poor man brought out the Vase and demonstrated how it produced everything he wished for.

In showing the Vase to his guests, the poor man got so excited that he dropped the Vase of Virtue and it shattered. The instant it broke, all of his possessions disappeared, along with his wealth. The poor man was right back where he had been before the god had given him the miraculous vase.

Arabia: Aladdin and the Magic Lamp

Aladdin and the Magic Lamp is a very famous Arabian legend. There was once a magician who knew about a hidden treasure trove at the foot of Mount Karas. He knew the most valuable thing in the treasure trove was a Magic Lamp and that whoever had the Lamp would have all the wealth and power in the world. But there was only one person who could open the door to the treasure and that was Aladdin, a boy from a very poor family.

The magician posed as Aladdin’s rich uncle and lured him in with bribes of luxury and riches the likes of which Aladdin had never seen before. The magician soon took Aladdin to the cave and used him to gain entry. Aladdin asked the magician to let him get out of the cave first and then he would hand the Lamp to the magician.

The magician was angry as he thought that Aladdin had discovered his plot to use the Lamp to further his own power and riches, so he left Aladdin behind in the cave and cursed him with a spell to bring death.

The magician forgot that he had lent the boy a magic ring. Aladdin didn’t know the ring was magic. Imagine his surprise when, after rubbing his hands together in desperation, a genie flew out of the ring and appeared before him! The genie took Aladdin home and fulfilled all of his wishes.

Even though Aladdin and his family now had access to inexhaustible wealth and riches, they continued to live a frugal and sensible life, not wasting food or indulging in excess. The formerly mischievous boy changed his many bad habits and became an honest and moral person. He learned how to be a good businessman and lived a very successful life. Through learning how to value life’s most important things, he defeated the magician and won the hand of the princess — the most beautiful girl in the land.

These two stories, when viewed together, both hold the same message. Be diligent, faithful, and true. Be humble and righteous. Hold onto your morals and you will receive and keep your blessings. Don’t risk everything by becoming arrogant and forgetting the source of all you have.