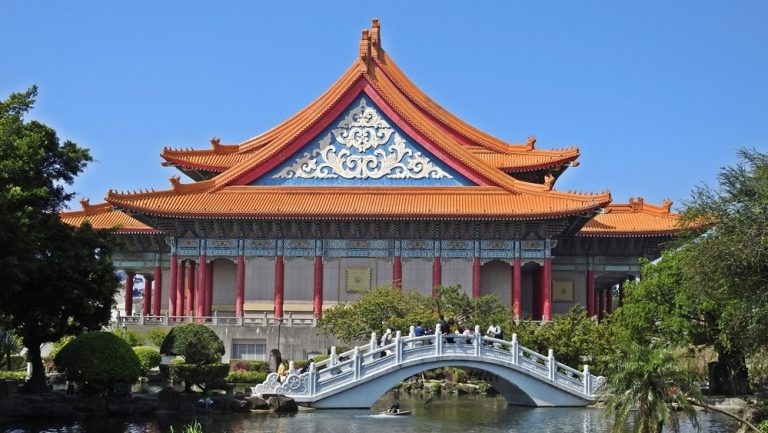 Located at the heart of Taipei City, the Chiang Kai-shek Memorial Hall was built in honor of the Republic of China’s late president, Chiang Kai-Shek. Not only is it a prominent landmark in Taipei, but it is also one of the most-visited tourist attractions in the capital of Taiwan.

Please watch this video of the Chiang Kai-shek Memorial complex:

The centerpiece of the expansive complex is the striking main hall. It’s a 3-story structure with an octagon-shaped roof rising 249 ft (76 meters). The eight sides of the roof are meant to symbolize the number 8, which is traditionally associated with fortune and wealth. The four white marble sides of the structure are similar to those of the pyramids in Egypt.

The main hall houses a huge bronze statue of Chiang Kai-shek flanked by members of the Republic of China Honor Guard. The Honor Guards stand at attention and take part in an elaborate changing of the guard ceremony on the top of each hour from 9 a.m. to 5 p.m., as well as a lowering of the national flag ceremony at 5 p.m. every day.

On the wall behind the statue are Chinese characters that translate into” Ethics,” “Democracy,” and “Science,” which are the essence of Dr. Sun Yat-sen’s Three Principles of the People. Inscriptions on either side of the statue read: “The purpose of life is to improve the livelihood of the entire people,” and “The meaning of life is to create the subsequent lives in the universe.”

There are two sets of stairs, each with 89 steps, leading to the main entrance of the main hall. The number of steps represents Chiang’s age at the time of his death. Between the staircases is a mural made of white marble with the emblem of the Republic of China and the images of auspicious clouds.

The spectacular garden and corridors

Chiang Kai-Shek Memorial Park, with an artificial pond on each side, is surrounded by white walls, blue tile roofed corridors, and pavilions. The walls have 390 Chinese-style latticed windows featuring 26 different motifs. The garden is filled with various kinds of plants. Plum blossoms, cherry blossoms, azaleas, and other types of flowers bloom at different times of the year.

The National Theater and the National Concert Hall are on opposite ends of Democracy Square. With distinctive yellow tiled roofs and red pillars, the two impressive landmarks are examples of the majestic Chinese palatial style. They play host to major musicals and performing arts performances all year round, and are considered one of the best artistic venues in the country. Each building also houses art galleries, shops, restaurants, and libraries.

Democracy Square is situated between the National Theater and the National Concert Hall and is 394 ft (120 meters) long and 394 ft wide. The square serves as an ideal venue for outdoor activities and gatherings.

Democracy Boulevard, which extends from the main gate at Liberty Square to the steps leading to the entrance of the main hall, is 1,246 ft (380 meters) long and 131 ft (40 meters) wide. It’s an ideal location for visitors to capture photographs of the memorial complex from different angles.

The main gate is 98 ft (30 meters) high and 262 ft (80 meters) wide. The top of the arch is inscribed with Chinese characters that translate to “Liberty Square.” It is one of the most amazing ceremonial arches in Taiwan. The pseudo-classical Chinese style arch has sapphire-blue glazed tiles resting atop white pillars.

There are two majestic side gates, the Dazhong Gate and the Daxiao Gate, located at the south and north sides of the Memorial complex. Both are 45 ft (13.8 meters) high and 65 ft (19.7 meters) wide.

Needless to say, the Chiang Kai-shek Memorial complex is a place where Taipei City residents and visitors alike can rest, play, and enjoy traditional Chinese culture and arts. Everyone should pay a visit to this spectacular complex when in Taipei City.