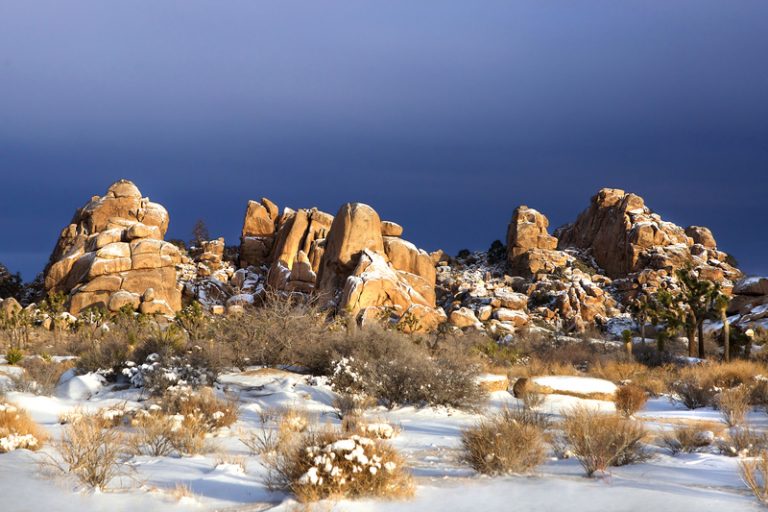 You may not see polar bears in the Joshua Tree National Park soon, but rare snow visits again. (Image: Katrina Brown via Dreamstime)

The dry landscape of Joshua Tree National Park was covered in layers of white due to a rare snowfall around Christmas time, making it a joyous and picturesque surprise for visitors.

The substantial temperature drop in southeastern California owing to the storm last week made way for a snowy carpet for those who trekked through the National Park. The rangers claim that the park has not witnessed snowfall like this since 2010.

The temperature drop also triggered rare snowfall in Arches National Park. The park remained closed owing to the massive accumulation of ice and snow. The rare sight of snow in national parks in California elated visitors who expressed their excitement over Twitter.

Rare snow is not altogether so rare

Considering how winter blizzards were experienced in some of the hottest parts of the United States, this rare snowfall is not too rare. Nevertheless, for Californians who feel the heat all around the year, the snowfall was certainly bliss.

The United States has a history of even some of the sunniest places in the country receiving winter and even summer snowfalls. The list includes Los Angeles, Southern Florida, Phoenix, South Texas, New Orleans, and the Death Valley in California.

Debbie Altieri recalls the exact moment she witnessed snowfall in January 1962 in California. The then 7-year-old Debbie recently moved from Pennsylvania and thus was taken aback to see snowflakes in the sunny California sky.

Debbie recalls: “I yelled at my mom that it was snowing.”  “She yelled back that we were in California now, and it doesn’t snow [here]. I kept insisting. She finally looked out a window, then started crying.”

The snowstorm of January 1962 in Los Angeles lasted 3 days and resulted in the blockage of roads and their closure. That was also the last time Los Angeles witnessed heavy snowfall.

Snowfall in January of 1977 in Florida too was taken for being a delusion until residents realized that the “white stuff” that covered the windshields of their cars was snow!

The cold current moved down to the Florida peninsula from January 18 through to the early morning of the next day. The Sunshine State experienced snow mixed with rain coming down on them between 8 and 9.30 a.m.

Several other states that remain sunny throughout the year have experienced unseasonal snowfall due to cold currents. This time, the Joshua Tree National Park in California was the snow-capped destination for tourists!

The state of Texas is currently experiencing a very unseasonal cold snap, with power outages and real-time hardship. Danger lurks in the ice, particularly for elderly neighbors and the homeless; frozen water pipes, fuel, and food supplies are in peril. Texans are famous for looking out for each other, and the world. With temperatures plummeting, such severe conditions to arrive suddenly upon a sunny state is not a welcome novelty.