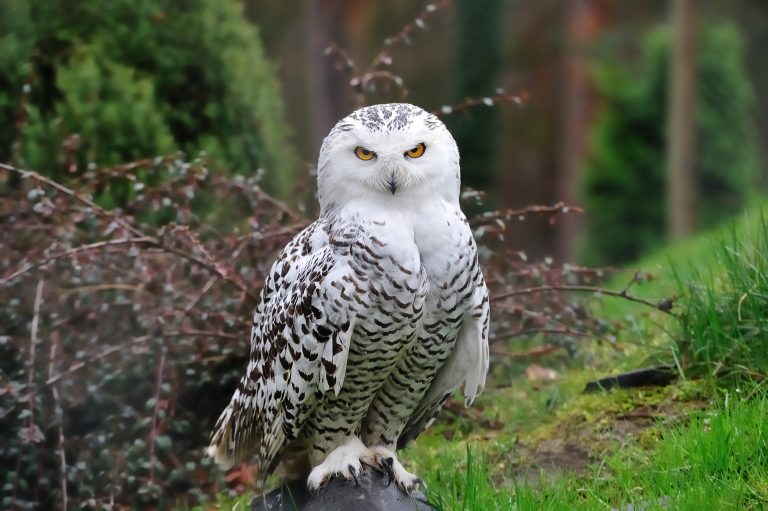 It has become so rare to spot wildlife in urban places these days that a single sight of any species makes headlines. That is exactly what happened when a rare snowy owl was spotted in NYC’s Central Park. The rare predatory bird was seen on January 27 and the sight led to a crowd at the park. Of course, the rare species Owl did not only make the human observers interested! The appearance also made the other avian species in the park curious — including some crows and one territorial hawk. The snowy owl had thick black stripes, which indicates it is a female.

In NY’s busy urban landscape, consisting of concrete jungle and skyscrapers, spotting such species of wildlife is pretty rare. The last time Manhattan residents spotted a snowy owl was back in 1890. In that year, a flock of white raptors was spotted flying through the east coast, headed to Delaware. Obviously, at that time, there were not so many camera-wielding birdwatchers eager to capture the birds in frame. So the bird spotted on January 27 can be the first-ever snowy Owl to be captured in one frame at the park. Apart from avid bird lovers, the crowd also included people taking their dogs for a walk and photography lovers.

Spotting a snowy owl in Manhattan is quite rare

Even ornithologists say that spotting a snowy owl in Manhattan is a rare occurrence. The snowy owls spend many months every year in northern Canada, and the Arctic tundra is where they are seen in abundance. Every winter, the majestic birds fly south, crisscrossing the U.S.-Canada border, according to the National Audubon Society. As they fly southward, the owls search for habitats that look like their homes in the tundra region. That is possibly a reason they often choose places like airports and chilly shores, or open fields. Nearby NYC, snowy owls have been seen at places like Liberty Island, Rikers Island city jail, and Jones Beach.

In an era when social media and smartphones rule the roost, the news of a rare bird being spotted at Central park spread very fast. So by 10:30 in the morning, at least 38,000 Twitter users were notified of the development. This led to a large crowd gathering at the place. Had it been an open space, the owl would have flown away. Thankfully, the baseball fields were actually fenced off at that time. So the curious onlookers had to stay at a distance from the bird. Park rangers also ensured the crowd did not get out of control! One person managed to fly a drone to get an aerial view of the bird, but the drone was intercepted.

The owl also had to cope with other avian onlookers who were apparently not very pleased with its unexpected appearance! Quite a few crows hopped around the owl and they had a defensive stance. There was a red-tailed hawk that tried to shoo away the owl. Red-tailed hawks are known to be territorial and like the owl, they feed on small-sized mammals.

For bird lovers who gathered at the site, the spectacle was very enchanting. Molly Adams, the Audubon Society outreach manager, compared the sight of the rare bird to winning the lottery. The birdwatchers returned to the spot on January 28 as well, with the hope that the owl might stay. However, they were disheartened to see it had flown away. Paul Sweet, the ornithology collection manager at the American Museum of Natural History, said: “I’m not surprised it moved on.” He added: ”It wasn’t being left alone — it was being quite bothered.” Usually, snowy owls remain in the southern regions until March or so and after that, they fly back to their homes in the Arctic.

The sighting of the snowy owl at Central Park, considered a species under threat, is significant. Climate change may take a toll on their numbers, warn the experts. In The IUCN Red List of Threatened Species, the bird has been put under vulnerable species. It is hard to track snowy owl populations, owing to their nomadic life. In fact, the migration pattern of the snowy owl is complex and erratic. The birds can be quite individualistic in that regard, say researchers.