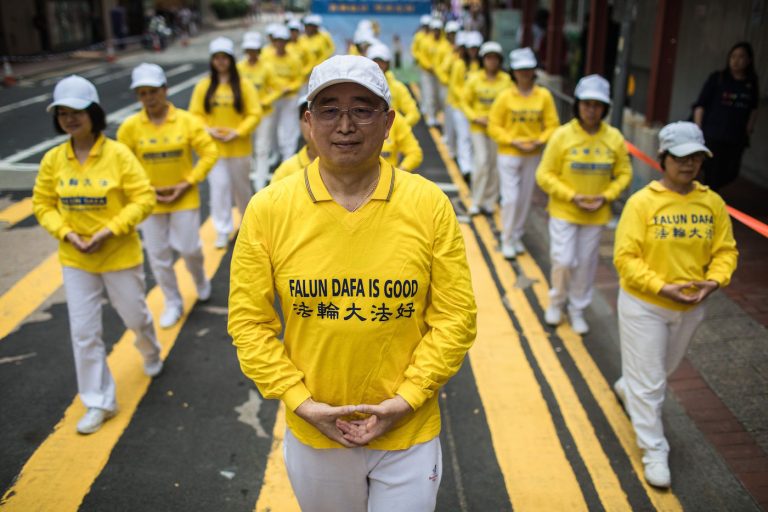 Supporters of the Falun Gong mediation practice take part in a march in Hong Kong on April 27, 2019, to observe the 20th anniversary of the persecution of the practice by Chinese communists on the mainland. (Image: Dale De La Rey / AFP via Getty Images)

People outside of China who do the meditation practice of Falun Gong face regular reprisals from the Chinese communist government, a report by U.S.-based rights watchdog Freedom House has said.

Repression of Falun Gong practitioners living overseas is part of a “sophisticated, global, and comprehensive campaign of transnational repression” being waged by the Chinese Communist Party (CCP), said the report released in early February.

Other groups of people being targeted by the CCP include Uyghurs, Tibetans, political dissidents, and more recently Hong Kongers and Inner Mongolians.

The report gave examples of how Falun Gong practitioners face regular reprisals from China and from agents of the Chinese state.

“These include frequent harassment and occasional physical assaults by members of visiting Chinese delegations or pro-Beijing proxies at protests overseas, as in cases that have occurred since 2014 in the United States, the Czech Republic, Taiwan, Brazil, and Argentina,” the report said.

“Media and cultural initiatives associated with Falun Gong have reported suspicious break-ins targeting sensitive information, vehicle tampering, and pressure from Chinese authorities for local businesses to cut off advertising or other contractual obligations with them,” it said

“Multiple Falun Gong practitioners in Thailand have also faced detention, including a Taiwanese man involved in uncensored radio broadcasts to China and several cases of Chinese refugees formally recognized as such by the UN High Commissioner for Refugees (UNHCR).”

The report also mentioned the case of Sun Yi, an engineer and Falun Gong practitioner, who became the subject of the film Letter from Masanjia.

“In October 2017, a Falun Gong practitioner who had survived a Chinese labor camp and become a high-profile informant on CCP abuses — sneaking a letter into a Halloween decoration when detained and later filming a documentary with undercover footage — died of sudden kidney failure in Indonesia,” the report said. “Some colleagues consider his death suspicious, but no autopsy was performed.”

The Chinese regime’s international clout has resulted in other nations becoming complicit in its overseas campaigns, the report said.

The report said that the “harshest forms of direct transnational repression from Chinese agents — espionage, cyberattacks, threats, and physical assaults — emerge primarily from the CCP’s domestic security and military apparatus: agencies like the Ministry of State Security (MSS), the Ministry of Public Security (MPS), and the People’s Liberation Army (PLA), although the precise division of labor among these entities is often unclear.”

Such activities targeting Falun Gong are led by the 6-10 Office, an extralegal security agency, and the MPS, said the report. “But local officials from various regions are also involved in monitoring Falun Gong exiles from their provinces,” it said.

Falun Gong, also known as Falun Dafa, has been undergoing persecution in mainland China for more than 20 years. Along with its meditation and slow-moving exercises, practitioners follow three main principles: Truthfulness, Compassion, and Tolerance.

The practice began in northern China during the early 1990s. Easy and free to learn, it quickly spread through China and beyond its borders.

Due to the practice’s popularity, the CCP began to persecute practitioners in 1999. The persecution has been brutal, with the most notable known example being the repeated reports that practitioners are being targeted for live organ harvesting in the country’s organ transplant industry.