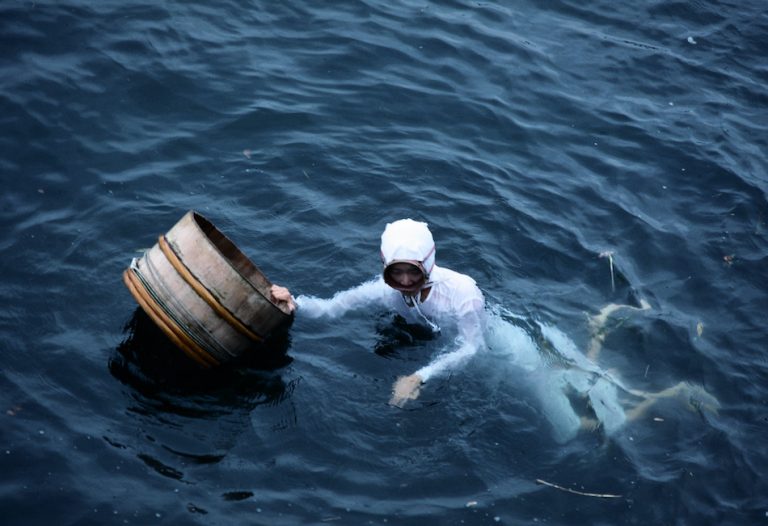 Ama-San are traditional Japanese female free-divers who make a living from the ocean collecting seaweed, shellfish, sea urchins, pearls, and abalone to sell at the market. (Image: via Wikimedia Commons)

The Ama-San women of Japan uphold a 2,000-year-old tradition of free-diving. Ama means “sea woman,” and the connection these women have with the ocean is one of utmost care and respect, something in this day and age we could all learn from.

Why Ama-San divers are treasured

What makes the Ama unique is that they rejected modern technology that would have made their working life much easier. They wanted to protect the abalone they dive for and prevent overfishing.

The ban remains to this day. They dive to depths of up to 80 feet, holding their breath for two minutes at a time without the aid of oxygen tanks or breathing apparatus. They harvest seaweed, oysters, and abalone off coastal Japan in the Mie Prefecture, 185 miles southwest of Tokyo.

Ama in art, literature, and poetry

You can find references to the Ama in the 8th-century Man’yoshu collection of Japanese Poetry, and the 10th-century Sei Shonagnon’s Pillow Book. Along with ukiyo-e paintings by Japanese woodblock artists — a genre that presented “pictures of the floating world” to people. The Ama continue to capture the imagination of many photographers, filmmakers, and writers to this day.

There are two types of Ama-San

These are the tools of their profession:

The Ama hut or Amagoya was a nest for the group to gather to warm themselves in-between dives. The group valued teamwork, and it’s here that they would connect. The time spent in the hut was a chance for the younger divers to listen to the more experienced divers and hear the secrets of where the best abalone are.

A lot of the breathing techniques and diving skills come with practice, but the valuable knowledge about the local reef environment was shared in the Amagoya.

The future of Japan’s Ama-San

The practice of free-diving would normally be passed from mother to daughter. But the Ama profession is slowly dying out now due to the pressures of modern life. However, some divers continue up to the age of 70.

And there are still some young ones out there who feel the pull of the ocean drawing them back to this traditional lifestyle.