How One Man Uses Origami to Change People’s Hearts 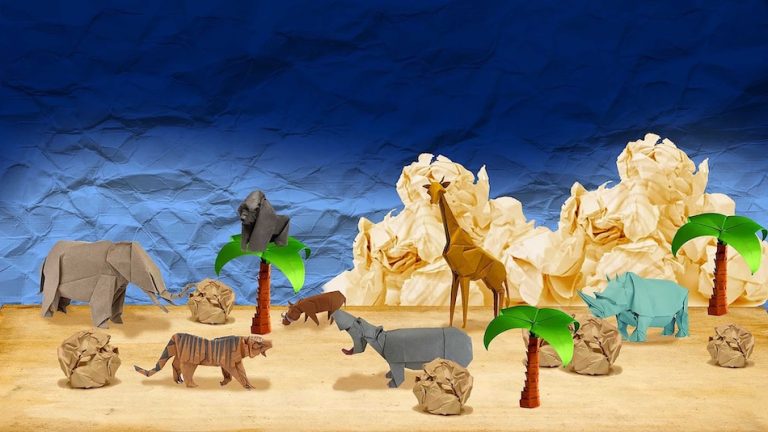 Whatever you want or can imagine, Liu Tong can use his hands to create it just with a piece of paper. From a rhino down to a minuscule ant, he has created all of them by folding a single piece of paper. Liu Tong uses origami to describe his inner feelings, and his work is highly regarded and appreciated.

In 2006, when Liu Tong was studying in Germany, he saw a man folding paper to create a flower and was fascinated by how such a beautiful object could emerge from a single piece of paper.

Chinese origami has a long history

Liu Tong returned to China where he was a university lecturer. However, his thoughts soon turned to origami, and he spent much of his spare time researching various paper folding techniques passed down over the centuries. Chinese origami has a long history in China, but it was the Japanese who brought it to prominence.

“Many people thought that origami originated from Japan because they treat origami as a national treasure.  I would like to use my action to prove to what extent origami has originated and developed in China.”

In 2016, his work Angel Gabriel was placed in a collection by the Hungarian Embassy, while his Black  Eagle was added to a collection by the German Football Association. Liu was also invited by Hermes to create a window display based upon his creations. Apart from being collector’s items, his works are also national gifts.

In 2014, his work Beauty of the Qing Vase was presented to the Gabonese Republic as a national gift to celebrate the 40th anniversary of the establishment of diplomatic relations between China and Gabon.

To Liu Tong, origami art has a profound meaning:

“Origami should not only serve as handicraft for people to admire, it can also represent one’s inner feelings.”

In 2016, Liu Tong told this inspirational story on his WeChat page. “A man killed a pangolin and exhausted all means to open up its curled up body. He next put it over a fire, and even though the animal was burned black, the body was still curled up and it took a long time for him to straighten it out. The man was shocked to find a moving baby inside the pangolin’s belly. The pangolin, until its last breath, tried to protect her child. This story showed how the power of a mother’s love surpasses the limits of life.”

Liu Tong was deeply moved by this story and created the works Shelter of Motherhood. His works were displayed by the Prado Museum in Spain, where they touched the hearts of all those who came to visit.

Later, he came to know about the endangered northern white rhino in Africa. With 119 square yards (100 square meters) of white paper, he spent almost a year completing an origami rhino measuring more than 6.5 yards (6 meters) long and 3.3 yards (3 meters) wide. Upon completion of his work, Liu Tong said:

“I use art to send a message to mankind to come together to protect animals; do not let another white rhino baby lose its mother.”

Liu Tong used his white rhino masterpiece to send a message about conservation and it was displayed at the embassies of several countries of the European Union.