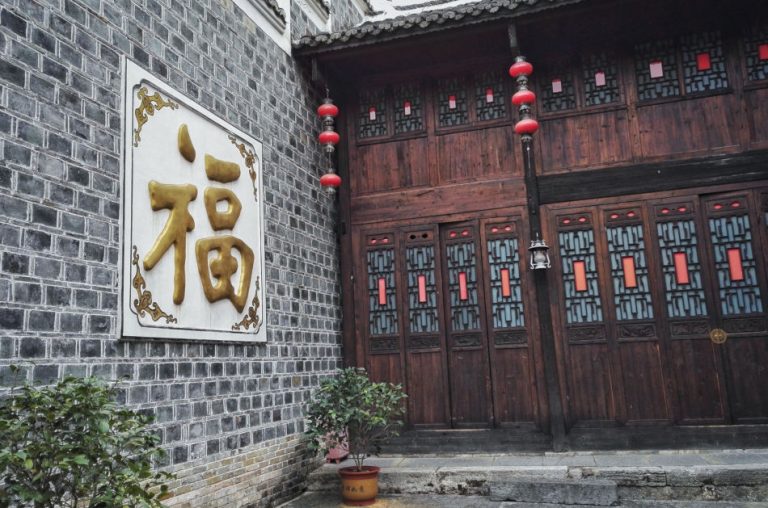 Chinese people like to welcome the New Year by hanging the character 'fu,' the Chinese character for fortune, by the front entrance. (Image: via Dreamstime.com © Shaowen1994)

Ordinary people are no comparison to Emperor Kangxi, who with a pious heart, fasted and cleansed himself for three days before writing the character “fu” about a half-meter tall, which enabled his grandmother, Empress Dowager Xiaozhuang, to miraculously recover her health. (See Part 1 here).

However, can displaying “fu” bring you good fortune as well? It sure can, if you are a good person. This point is explicitly described in the Taoist classic scripture Treatise On the Response of the Tao: “Good people are those who are respected by others, blessed by the Heavens, accompanied by good fortune, avoided by the demons, protected by the gods, and succeed in everything they do.”

During the pandemic, it is vital to know evils and calamities will stay away from good people. There are many examples in history where good people avoided the plague.

One example is Feng Shixing, the highest-ranking scholar in the imperial examination during the Song Dynasty. The incident happened before he achieved his scholarly honor. On a New Year’s Day, Feng Shixing left home early and ran into a group of ghosts. Feng was not afraid, howled at the ghosts, and questioned what they were trying to do. The ghosts told him they were on their way to spread a plague.

Feng asked: “Will my household get it?”

“Why?” Feng was curious.

“Your family has been doing good deeds for three generations. You stop people from misconduct and you praise people for their kind deeds. These virtuous acts blessed your family’s offspring with great accomplishments. How would we dare to infect your family?” were the words spoken by the ghosts before they vanished.

That year the plague raged in the community but Feng’s family was spared. Being a good person can really allow one to escape from calamity!

Some may wonder how the standard of “good” is measured. Different people have different definitions. Zhuan Falun is a book that may give you the answer. It really makes people understand what a good person is and how to be a good person. This book has been translated into more than 40 languages, circulated in more than 100 countries, and appreciated by hundreds of millions of people worldwide.

Now, let’s get back to the proper way to display “fu” and the origin of the upside-down way. There are many versions of the story, but the most common one is related to Emperor Zhu Yuanzhang and Empress Ma of the Ming Dynasty.

It was an evening during the Lantern Festival. Emperor Zhu disguised himself in commoner’s clothes to tour the streets of the capital. He saw a group of people gathering and laughing around a lantern. He was curious and checked out the lantern. The picture on the lantern was of a woman with big feet holding a watermelon.

Foot-binding was a common practice among women in the Ming Dynasty. Emperor Zhu’s wife, Empress Ma, however, was an exception. People laughed at her big feet.  Seeing the image on the lantern, Emperor Zhu regarded it as a mockery of his wife and became mad instantly. He decided to send guards to arrest the people who placed the lantern there when he returned to the palace. To help identify that household, he asked his servants to place an upside-down “fu” on the door as a mark.

Observing Emperor Zhu’s anger upon returning, Empress Ma inquired what happened and he told her about the lantern. The kind-hearted empress could not bear to see people losing their lives because of her, but she knew it was not an option to change the emperor’s mind while he was in a bad mood. She thought hard for ways to tackle this crisis.

A brilliant idea came to her. She sent servants to find the marked household first and then paste an upside-down “fu” on all doors on the same street.  When the guards arrived for the arrest, they were at a loss as to which household to go to. The family hanging the lantern was saved by the upside-down “fu” paper as a result and this way of displaying “fu” became popular and has been passed down from that time.

An upside-down “fu” may temporarily help evade disaster, but for long-lasting good fortune, besides properly displaying “fu,” accumulating virtue is the real key.

Translated and edited by Angela M.