The Guqin: Playing Music From the Heart 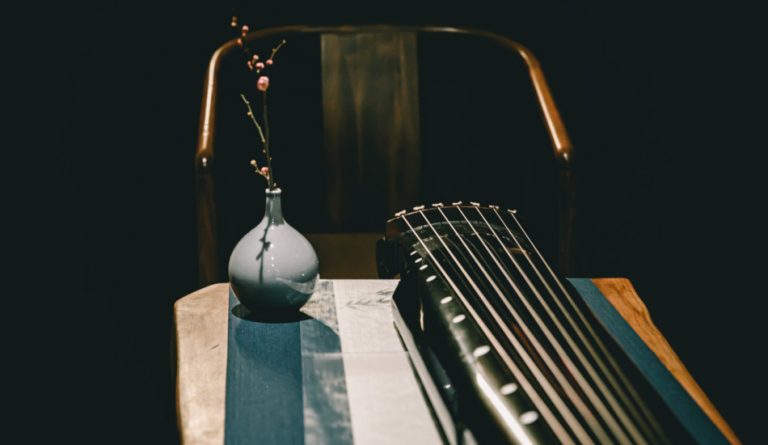 The guqin is a five- or seven-stringed plucked instrument originating in Ancient China, where the skill of the player was seen as a reflection of their character. (Image: Kenn Wang via Dreamstime)

The guqin is a five- or seven-stringed plucked instrument originating in Ancient China. It was considered essential to know how to play the instrument by ancient men of virtue because it was a symbol of saintliness and noble character. The music of the guqin blends in with the traditional culture and reflects a distinct, simple, and elegant style, as well as the pursuit of a peaceful and lofty realm. Ancient people cared for their conduct and attended to everything with the heart. Stories about learning and playing the guqin are often inspirational for people today.

Shi Wen of the Zheng state of the Spring and Autumn period wanted to learn to play the guqin. He heard that the musician Shi Xiang was an extraordinary player. There were even tales of birds flying and fish jumping to the beat and vibrations of his tunes. Wen wanted to play the same way, so he traveled to the Lu state to learn from the master.

Shi Xiang started teaching Shi Wen to tune and pitch. Shi Wen’s progress was not as smooth as Shi Xiang would have expected. He could not even complete a section of a tune despite learning for three years.

Shi Xiang commented: “You still lack the power to comprehend and you don’t focus enough.”

Shi Wen replied: “It is neither that I cannot tune and pitch precisely nor that I cannot complete a tune. My focus and desire is not on the tone or rhythm. My pursuit is to play the guqin to reflect what I feel in my heart. Until I can play music from my heart and express it through the guqin as one, I dare not let myself go to pluck or fiddle the strings freely. Please allow me more time and see if I can make improvement.”

Shi Wen settled himself down and concentrated on learning every day. He used his heart to feel the notes and the mood they exuded. He kept learning and improving.

The guqin must be played from the heart

After a period of time, Shi Wen visited his master.  Shi Xiang asked: “How’s your music now?”  Confidently, the student answered: “I can now play from my heart. Please let me play for you.”

Shi Wen started playing the guqin. First, he played the string for metal notes. It was like the autumn breeze blowing and the grass and trees were about to mature and bear fruit. Enveloped by a fall harvest scene, he then played the string for wood notes. The air instantly became a warm breeze and the flowers and grass grew energetically, as in the spring. He followed by playing the string for water notes. Immediately, it felt like frost and snow had arrived and streams and rivers were frozen. It was a scene of stern weather. He continued to play the string for fire notes. The fiery sun appeared and the ice and snow melted and disappeared.

As the tune drew near the end, Shi Wen played the remaining head string for earth notes to make it resonant with the other four strings. Instantly a gentle breeze brushed by, soft fleecy clouds floated, sweet dew fell, and fresh spring water flowed.

Shi Xiang was thrilled and praised his student: “That was excellent. Your music made me feel as if I were in the real scene and experienced what genuine beauty is.”

Shi Wen later became a court musician of the Zheng state and a music master of his time.

Shi Wen’s learning process illustrates the key to success. True mastery is not through technique, but through the heart — to feel and grasp the essence. As for music, tunes and notes do not make it extraordinary; it’s the performer’s heart that does.

Translated by CC and edited by Helen