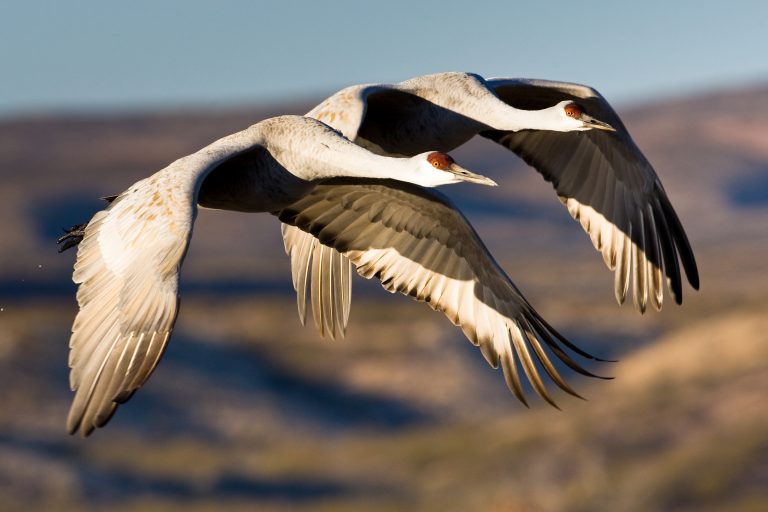 Every spring, starting from February through late April, Nebraska’s Platte River Valley witnesses the mass migration of sandhill cranes in the world’s largest crane migration. The extent of the migration is such that it may be compared to some of the world’s greatest wildlife spectacles , such as the migration of caribou and wildebeest.

But what makes the phenomenon so huge that the rainwater basin of North America turns into a flyway for migratory sandhill cranes?

To start with, the migration includes more than 80 percent of the world’s population of sandhill cranes. Secondly, this scenic seasonal delight marks the beginning of their thousand-mile journey to breeding grounds like Siberia, Alaska, and Canada. And most importantly, their congregation at the heart of the Great Plains attracts a plethora of ducks and geese from the neighboring base, thus, a splendid treat for nature lovers. The temporary settlement of sandhill cranes over the 80-mile stretch is as fascinating as it is rare.

Sounds thrilling enough? Let us explore some more facts to understand the nature and extent of the convergence of these migrant birds.

Sandhill cranes have been there since the Eocene era and being migratory birds, they fly over long distances at the end of each winter to the Arctic and subarctic regions. Nebraska’s River Platte Valley is their congregation spot for some brisk rest and rejuvenation in the journey north. Arriving from Mexico, Texas, and New Mexico, these birds replenish and restore themselves in the shallow channels of the River Platte. But other reasons make the River Platte a favorable spot for a brief hiatus in the long and arduous journey of the birds toward the northern countries.

It is a safe nighttime roost sight for the birds. The sandhill cranes find waste grains from the crop fields, helping them with the replenishment of reserves needed for migrating long distances. Additionally, the cranes find secluded areas in the meadows for bathing, resting, and courting. It is during this brief hiatus that these cranes gain about 10 percent of their body weight. And even though the majority of the birds arriving in the Nebraskan Valley are sandhill cranes, some populations of whooping cranes fly alongside to migrate to the northern countries during spring.

These whooping cranes are considered an endangered species by many. These cranes are the tallest birds in North America. However, their physical stature is in itself an impediment to their survival. Owing to the rapid loss of wetland habitat, the count of these birds was reduced to a mere 15 in 1941. Post the Endangered Species Act and other conservation efforts by the government, the number has increased to 500 according to data published in 2018.

The sandhill cranes standing one-legged, a silhouette figure against the bright orange sky, might require you to adjust your eyes and take a long, hard look at them. However, once they take flight, stretching their wings in sync with the horizon, you will barely be able to take your eyes off the picturesque sight.

The notable and the most beautiful thing here is that the birds create a ripple effect as they fly with more birds joining the clump to create something splendid.

If you want to visit

If you are visiting a conservation center in Nebraska this spring, make sure you also check out the wildlife, including bald eagles, black-tailed prairie dogs, hawks, sharp-tailed grouse, and various other species of animals and birds. You may also want to check out the Central Eagle Viewing Facility and other birding circles.

So are you ready to witness the largest migration of sandhill cranes in Nebraska this spring?