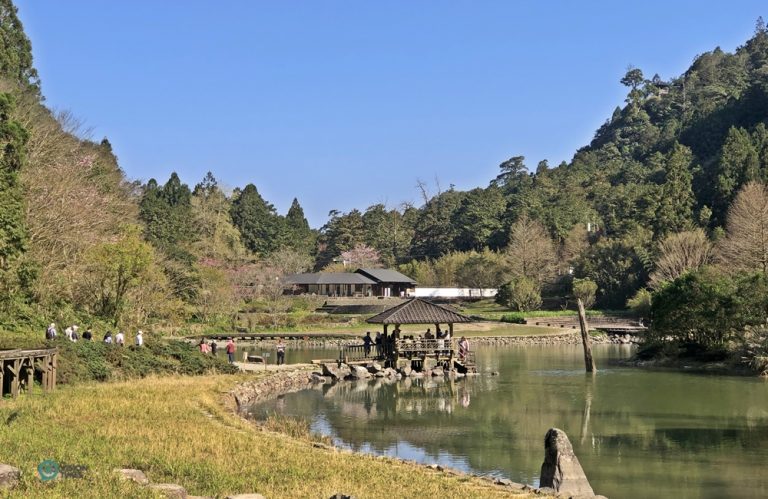 Embraced by high mountains, the resort stands at a height of 1,150 meters (3,772 feet) above sea level. It is the highest point of the Northern Cross-island Highway, one of Taiwan’s three breathtaking east-west mountain routes.

Covering an area of around 3 hectares (7.4 acres), the recreation area also boasts beautiful forest landscapes, as the lake is surrounded by forests thick with planted cryptomeria and old-growth cypress.

Besides the charming ambiance, the recreation area also provides visitors with a good chance of seeing wild animals, ranging from Formosan macaques, squirrels, Mandarin ducks, mallards, and various species of birds and butterflies.

With its distinctive natural beauty and unique location, Mingchi has won itself a lovely name as the “Pearl of the North Cross-Island Highway.”

Mingchi was originally called “Momo Bale” by the Atayal people, which means the “pond at the top.” It was renamed “Chiduan (池端)” by the Japanese during the Japanese occupation period.

In 1965, when late president Chiang Chingkuo visited “Chiduan” and found that it was as beautiful as a bright lake, he then renamed it Minchi. Currently, it is one of the eight forest recreation areas managed by the Veterans Affairs Council. The Mingchi Forest Recreation Area has been open to the public since October 10, 1993.

Standing strikingly outside the entrance of the Resort, the Mingchi Divine Tree is one of the outstanding features of Mingchi. It is a Red cypress aged about 1,500 years, and is 31.6 meters (104 ft) in height and 11.62 meters (38 ft) in circumference.

Often shrouded by a cloudy mist, Mingchi Lake is surrounded by a footpath with captivating views. Besides a cute little island in the center of the lake, there are some dead redwood trunks standing in the water. It creates an abstract ambiance for the lake and makes it even more charming. Another good thing about the lake is that there is a lookout pavilion on the lake, where a female cello player often performs relaxing music to soothe visitors.

The walking trail was built along the terrain within the matrix arrangement of tree plantations. It also incorporated the fascinating fairy tale of Snow White and the Seven Dwarfs in the construction of the trail, which makes it more fun when walking on it.

To commemorate the 100th anniversary of the birth of Dr. Sun Yat-Sen, the forest on the other side of the Mingchi Lake was named the “Commemorative Forest for the Hundred Years of Sun Yat-sen” in 1964.

Covering about 2 hectares (5 acres), the forest is where the Mingchi Nursery is located. Since there are over 18 families, 38 genera, and 50 species of ferns in the forest, it was renamed the Fern Garden.

There are two wooden walking paths in the Fern Garden. The “Woodland Classroom” for ferns and the two-tiered viewing deck were constructed along the paths, and these allow visitors to learn more about nature in different perspectives and forest ecology.