Thugs for Hire: The Relationship Between Beijing and the Hong Kong Triads 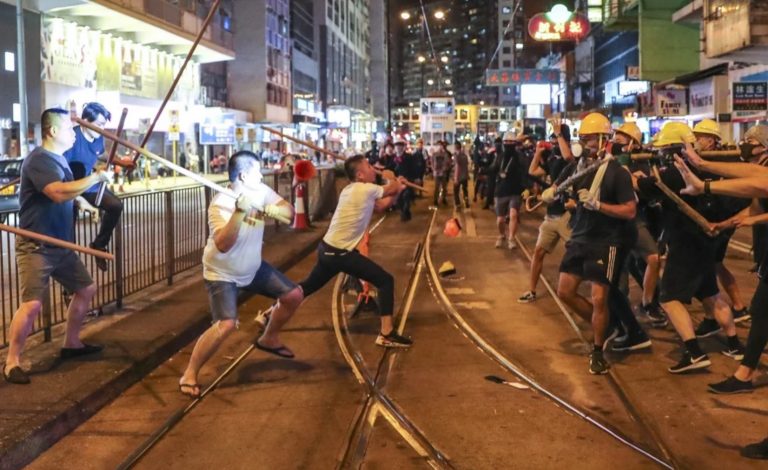 On the evening of July 21, 2019, dozens of masked men in white T-shirts stormed the Yuen Long train station and assaulted people returning home after a pro-democracy protest, as well as passers-by, with wooden sticks and metal rods. There has been widespread speculation that the attackers belonged to the Hong Kong triads — the name given to organized criminal networks that operate in Hong Kong.

The violence left 45 people injured and shocked the territory, as footage of the brutal attack quickly circulated online.

What are the Hong Kong triads, and what is their history of violence?

Triads have a global presence with operations in Taiwan, Macau, and Chinese overseas communities in Southeast Asia, North America, and Europe. However, a majority conduct their criminal activities — which include extortion, counterfeiting, drug trafficking, and prostitution — in Hong Kong.

A South China Morning Post article from 2017 estimated that there could be as many as 100,000 triad members operating within the city, with the most notorious gangs being the 14K, Sun Yee On, and Wo Shing Wo.

The triads developed out of the 18th-century Tiandihui, (also known as the Hongmen) and often worked with foreign traders to bring opium into China. In the 19th century, they operated as secret societies opposed to the harsh rule of the Manchu Qing Dynasty, regarded by many ethnic Han Chinese as barbarian outsiders, and aimed to replace them with the old Ming Dynasty.

The triads thrived in the warlord era from the 1920s to the 1940s, particularly in freewheeling Shanghai, where at its height the Shanghai-based Green Gang had 100,000 members and connections with the Kuomintang, the ruling party of China at the time.

During World War II, some gangs helped the Kuomintang nationalists fight against the Japanese while others took advantage of the chaos to ravage the countryside. The end of the war saw a resurgence in activity in new locations such as Singapore, which became notorious for gang violence.

Triads were largely driven out of the Chinese mainland following the Chinese Communist Party (CCP) takeover in 1949, but they continued to flourish in Hong Kong and Macau. Many also allied with the defeated Kuomintang Chinese nationalists in Taiwan.

Some triad groups began shifting their allegiances in the early 1990s as Beijing began showing signs of tolerance, a remarkable transition for crime groups that once used to be archenemies of communism.

Before the handover in 1997, the CCP had built on its considerable contacts with gangsters in the south — forged largely through the personal connections between party officials and local gangsters — and drew from their ability to cross the border for various, often trade-related, activities.

It was around this time that Beijing began showing increasing openness to the Hong Kong triads. “Regarding organizations like the triads in Hong Kong, as long as these people are patriotic, as long as they are concerned with Hong Kong’s prosperity and stability, we should unite with them,” said Tao Siju, China’s Police Minister during a press conference in 1993.

He went on to say: “Our public security organs have broad links and ties with different strata in society, including such groups,” and recalled how, when an unnamed Chinese state leader paid an overseas visit, the Chinese Secret Service was helped by “800 triad members to guard our state leader against any danger.”

Beijing later played down Tao Siju’s statements, but there was not much doubt that the CCP was strengthening its ties with the Hong Kong triads.

Since Hong Kong’s 1997 handover from British colonial rule, some of Beijing’s most ardent critics have found themselves at the wrong end of a triad assault.

In 2014, former Ming Pao newspaper editor Kevin Lau was nearly killed in a machete attack by two men who said they were paid to “teach Lau a lesson.”

Also in 2014, as a wave of pro-democracy protests swept through Hong Kong, a group of men in white T-shirts descended on demonstrators in Mongkok. Many of those later arrested had links with prominent triad gangs Wo Shing Wo and 14K, who were also believed to be behind the Yuen Long train station attack.

Those who study the phenomenon say there is rarely a clear evidence chain. “Governments outsource violence to third-party agents for plausible deniability,” said Lynette Ong, a University of Toronto academic who studies the patron-client relationship between gangsters and local governments in China.

Regarding the violence at Yuen Long, she said they “could be part of organized crime groups, or simply people who are willing to work by using their muscle power.”

While the attacks were hard to directly trace back to Beijing, the circumstantial evidence points strongly in the mainland’s direction. Though the former colony is under Chinese control, the CCP still needed to exercise some restraint in the use of force against elements in Hong Kong it deemed undesirable.

Beijing knows full well that a direct assault by the state apparatus would be counterproductive and likely would have alienated a larger number of Hong Kong residents. Pro-Beijing thugs are easily manipulated, have no compunction in using force, and, more importantly, offer plausible deniability.

The CCP wasn’t the first to employ organized criminal elements for the purpose of political agitation, the Nazis and Bolsheviks utilized similar tactics when attempting to seize power in Germany and Russia.

The blurred line between criminal activity and political agitation creates a jurisdictional nightmare for law enforcement in the targeted societies while providing plausible deniability for the political forces working behind the scenes. The quick enrichment promised by involvement also ensures a ready supply of recruits among delinquents and dropouts.

As China becomes a global power, and as it seeks to expand its influence globally, triads that are already active in the Chinese diaspora — across Southeast Asia, Europe, and North America — could also begin to play a more active role, again to threaten political opponents and media that remain critical of Beijing.