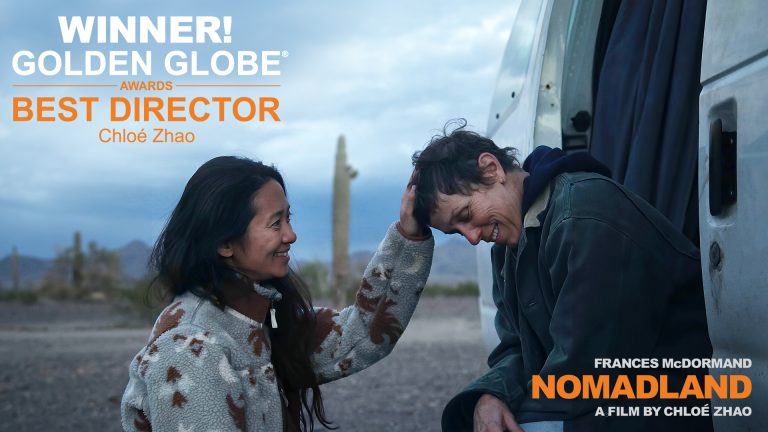 Director Chloé Zhao with actress Frances McDormand on location during the filming of Nomadland. (Image: via Searchlight Pictures)

Chloé Zhao became the first female winner of Asian descent to win the Best Director category at the 2021 Golden Globes Awards for her film Nomadland, which also carried top honors by winning the Best Motion Picture-Drama category. Zhao joins Barbra Streisand, who won in 1984 for Yentl, as only the second woman to win directing honors at the Golden Globes.

“I especially want to thank the nomads who shared their stories with us,” Zhao said, accepting the directing honor virtually.

She singled out real-life nomad Bob Wells, who appears in the movie, for help with her remarks.

“This is what he said about compassion,” Zhao said. “Compassion is the breakdown of all the barriers between us. A heart-to-heart pounding. Your pain is my pain. It’s mingled and shared between us.”

Nomadland stars Academy Award-winning actress Frances McDormand (Fargo, Three Billboards Outside Ebbing, Missouri), who plays Fern, a widow who has been left homeless after the gypsum mine that had propped up the town of Empire closes for good. Fern lives and travels through America in her white van, encountering other real-life nomads on her journey.

The following is the official trailer of Nomadland.

The film won Venice’s Golden Lion and the People’s Choice Award at the 2020 Toronto International Film Festival. It has since become a frontrunner in the race for major 2021 Academy Award nominations, including Best Picture and Best Director.

Asians around the world reacted with joy when Chloé Zhao’s win was announced. Many praised her on social media for being a “huge inspiration for young Asian girls,” adding that it was a “win for women everywhere.”

Footage released by the Golden Globes showed Mr. Lee’s daughter holding him tightly when the win was announced, saying: “I prayed, I prayed!”

Zhao was born and raised in Beijing, China where she was drawn to influences from Western pop culture. She attended a boarding school in London before moving to Los Angeles to finish high school. She later studied at Mount Holyoke College in Massachusetts, earning a bachelor’s degree in political science before studying film production at New York University’s Tisch School of the Arts.

In 2015, Zhao directed her first feature film, Songs My Brothers Taught Me. Filmed on location at the Pine Ridge Indian Reservation in South Dakota, the film depicts the relationship between a Lakota Sioux brother and his younger sister.

In 2017, she directed The Rider, a contemporary western drama that follows a young cowboy’s journey to discover himself after a near-fatal accident ends his professional riding career. The film premiered at Cannes Film Festival as part of the Directors’ Fortnight selection and won the Art Cinema Award.

In 2020, Zhao directed her third feature film, Nomadland. The film was shot over four months of traveling the American West in an RV with actual nomadic workers. The film’s major themes of unemployment and displacement resonated deeply with audiences during the coronavirus pandemic.

Zhao is currently working on two new projects. She is set to direct and write the screenplay of a yet-untitled Bass Reeves biopic about the first black U.S. Deputy Marshal. Marvel Studios also hired her to direct Eternals, based on the comic book characters of the same name. The film is scheduled to be released later this year.