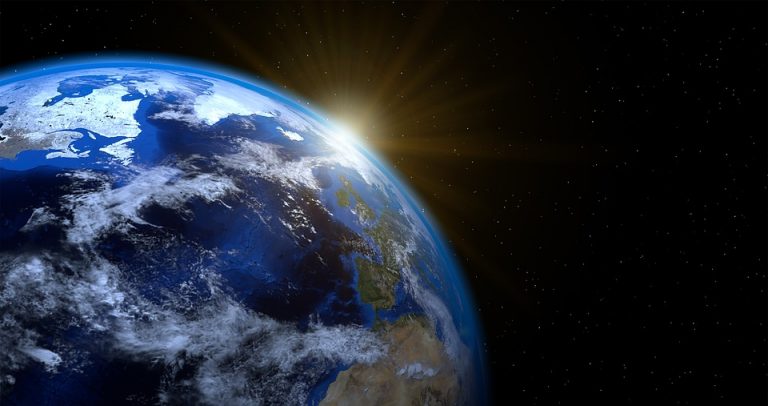 Guided by their theoretical predictions, the team then tried to verify this predicted superionic phase in hot FeOOH by carrying out high-temperature and high-pressure experiments using a laser-heating technique in a diamond anvil cell. (Image: PIRO4D via Pixabay)

Pierfranco Demontis said in 1988: “Ice becomes a fast-ion conductor at high pressure and high temperatures,” but his prediction was only hypothetical until recently. After 30 years of study, superionic phases of water ice were verified experimentally in 2018. Superionicity may eventually explain the strong magnetic field in giant planetary interiors and Earth’s deep mantle.

What about Earth, whose interiors are also under extreme pressure and temperature conditions? Although three-quarters of Earth’s surface is covered by water, standalone water or ice rarely exists in Earth’s interior. The most common unit of “water” is hydroxyl, which is associated with host minerals to make them hydrous minerals.

Here, a research group led by Dr. Qingyang Hu, Dr. Duckyoung Kim, and Dr. Jin Liu from the Center for High Pressure Science and Technology Advanced Research discovered that one such hydrous mineral also enters exotic superionic phases, similar to water ice in giant planets. The results are published in Nature Geosciences. Dr. He, who conducted the computational simulation, said:

“It developed into the superionic phase above about 1700°C and 800,000 times normal atmospheric pressure. Such pressure and temperature conditions ensure a large portion of Earth’s lower mantle can host the superionic hydrous mineral. These deep regions may have rivers made of protons, which flow through the solids.”

Guided by their theoretical predictions, the team then tried to verify these predicted superionic phases in hot FeOOH by carrying out high-temperature and high-pressure experiments using a laser-heating technique in a diamond anvil cell. Dr. Hu, one of the lead authors, said:

“It is technically challenging to recognize the motion of H atoms experimentally; however, the evolution of O-H bonding is sensitive to Raman spectroscopy. So, we tracked the evolution of the O-H bond and captured this exotic state in its ordinary form.”

They found that the O-H bonding softens abruptly above 73,000 times normal atmospheric pressure, along with ~ 55 percent weakening of the O-H Raman peak intensity.

These results indicate that some H+ may be delocalized from oxygen and become mobile, thus, weakening the O-H bonding, consistent with simulations. Dr. Hou explained:

“The softening and weakening of the O-H bonding at high-pressure and room-temperature conditions can only be regarded as a precursor of the superionic state because high temperature is required to increase the mobility beyond the unit cell.”

In superionic materials, there will be an obvious conductivity change, which is robust evidence of superionization. The team measured the electrical-conductivity evolution of the sample at high-temperature and pressure conditions. They observed an abrupt increase in electrical conductivity around 1500-1700°C and 121,000 times normal atmospheric pressure, indicating the diffusive hydrogen had covered the entire solid sample and thus, entered a superionic state. Dr. Liu, a co-lead author of the work, remarked:

This work has important implications for Earth science because superionic phases will dramatically change the geophysical picture of electrical conductivity, magnetism, and materials transportation. Because materials exchange in-between solids are extremely inefficient, the mantle convection was previously thought to be slow, often described by thousands to millions of years. There is no direct observation of how materials are cycling thousands of kilometers below the surface. However, the existence of superionic phases suggests the rate of mantle convection could be magnitudes higher. Similar to rivers, fast-moving hydrogen connects remote regions by transporting heat and mass. The solid Earth could be more dynamic than previously thought.

Provided by: Center for High Pressure Science & Technology Advanced Research [Note: Materials may be edited for content and length.]