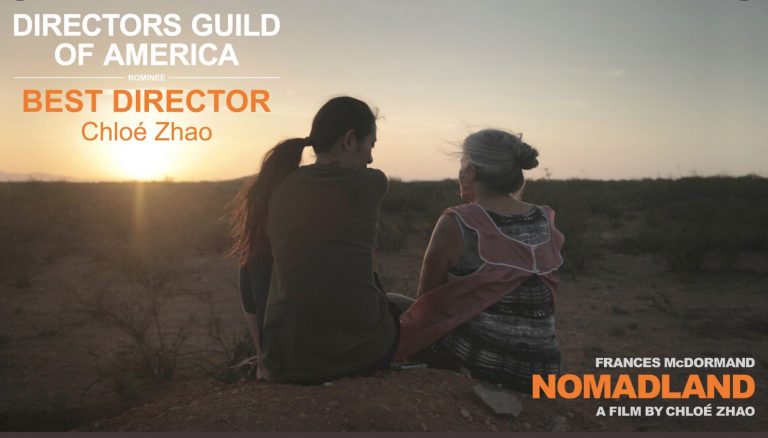 Chloé Zhao became the first female winner of Asian descent to win the Best Director category at the 2021 Golden Globes Awards for her film 'Nomadland.' (Image: via Searchlight Pictures)

Chloé Zhao, the first Asian woman to win a Golden Globe for Best Director, is facing a backlash in her native China over a 2013 comment describing the country as a place “where there are lies everywhere.”

Promotional material for Nomadland, as well as mentions of it on Weibo, the Chinese equivalent to Twitter, has been restricted by Chinese censors, and a hashtag about the film with 87 million views has been removed “according to relevant laws, regulations and political policies.”

Chloé Zhao was previously widely praised by Chinese media for becoming the first Asian woman in history to win a Golden Globes award for best director. State media headlines lauded her as “the pride of China,” and advertised the film’s China release for April 23.

The censorship efforts appear linked to comments made by Chloé Zhao in 2013 in the small New York quarterly, Filmmaker Magazine. Discussing what drew her into her debut feature about a Native American teen struggling to find his way on a reservation, Chloé Zhao said: “It goes back to when I was a teenager in China, being in a place where there are lies everywhere.”

But soon after her win, they were resurfaced by Chinese social media users, some of whom accused her of “smearing China” and called for a boycott of the film.

The criticism was fuelled further by a misquote in a recent Australian media interview that focused heavily on the themes of home and identity, where Chloé Zhao’s comment that the U.S. “is not my country, ultimately” was originally reported as “now my country.”

After its performance at the Golden Globes, Nomadland became a frontrunner for the Academy Awards as well, but it is not clear whether the sudden criticism in China will lead to an outright ban in the country. The controversy over Nomadland might also endanger her next project, the Marvel superhero extravaganza The Eternals starring Angelina Jolie, a potentially much more lucrative movie at the Chinese box office.

By the time of Chloé Zhao’s backlash, explosive and unpredictable nationalist outrage had already become a recurring phenomenon in China. The same Internet-driven patriotic outrage was behind the NBA’s moment of crisis in China after former Houston Rockets GM Daryl Morey tweeted support for Hong Kong’s pro-democracy movement in 2019.

In all of these instances, government censorship and regulatory actions trailed the explosion of outrage on social media. Swathes of online nationalists, referred to as “little pinks” by their critics, who stand ready to repudiate comments deemed disparaging of China, have become a larger and more unpredictable concern among filmmakers when compared to government censorship.

Much like the social media response, which featured both fierce criticism of Chloé Zhao and fervent defense of her, the official reaction so far has remained uncharacteristically fuzzy — a partial online blackout of Nomadland and Chloé Zhao, rather than a complete expungement. This all raises the questions of who the ultimate arbiters of the Chinese cybersphere are, and what comments constitute crossing a red line.