How a Jade Bangle Is Made Traditionally 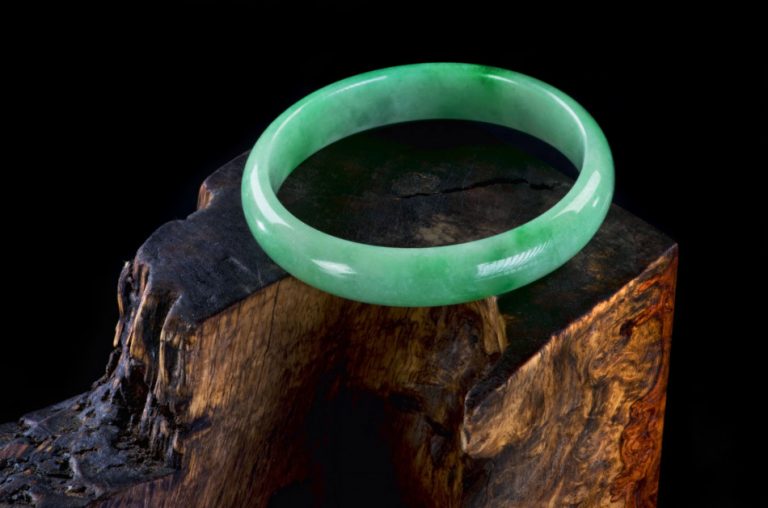 Jade, also known as the Emperor’s Stone, has been a symbol of status, power, and spirituality since ancient times. (Image: W.scott Mcgill via Dreamstime)

Jade, also known as the Emperor’s Stone, has been a symbol of status, power, and spirituality ever since the Stone Age. In ancient China, the use of jade was widespread. Jade has been used to make everything imaginable, from tools and weapons to furniture, decorations, and jewelry worn by royals. But it was only around 3,000 BC that the mineral became recognized as the “royal gem.” Jade bangles are now highly prized.

Before the discovery of jadeite jade, nephrite jade was used to make ornaments. Jadeite jade came to China from Burma in the 14th century and has been the most-loved gemstone for the Chinese ever since.

Besides being a precious stone that represents royalty, jadeite jade is also known for its rarity and durability. Such properties also make jadeite a sought-after choice for ornaments like bangles even to people in the West. A major portion of the jadeite bangles supplied in the global market comes from Myanmar.

But carving a piece of jade into a beautiful jade bangle is quite a task. This article provides a comprehensive insight into how a jade bangle is made traditionally.

Jadeite boulders can be bought from local vendors in Myanmar, and it is here that the finest quality can be found. Boulders are also auctioned off by the government and therefore are pretty accessible to jade craftsmen.

Jadeite boulders are not homogeneously colored. Color varies from brownish to black. Since there is no particular indication of the quality of jadeite, there is no way to know if the quality of the material is good. However, buyers use multiple hacks in an attempt to ascertain the quality. Some carve out a small window on the boulder. Others cut the boulder in half. But for the buyer to know that he has got his hands on good material requires skill and intuition.

Making slabs out of the boulder

Placement of templates and sizing

After the jadeite boulder has been sliced evenly, the workers need to make an outline on them for the bangles they wish to make. Needless to say, the jadeite slabs are once again inspected after this step to check for any flaws.

It is up to the workers to crave as many bangles as they reasonably can out of any given slab. The idea is to utilize each slab to carve out the most number of bangles with no evident flaws.

The most common size for jade bangles is roughly 2 to 2.5 inches (52 to 59mm), which refers to the inside diameter. However, discrepancies in bangle size are corrected by customizing the bangle by polishing it.

Looking out for flaws

Carving bangles out of templates is tricky as the chances are high that the material will break during the drilling and processing. But natural flaws are also common and they must be corrected through polishing and customization.

After the outline has been made, the jadeite slabs are placed inside of a drilling machine that results in a perfectly round-looking jade bangle. The entire process takes place under water to reduce the chances of breakage of jadeite due to excessive heat. Here, the water acts as a coolant and is an imperative part of the manufacturing process.

The rough bangle is then carved into the desired style using a diamond flat lab while it is placed on top of a spinning spindle. The bangles may be of various shapes including flat, round, semi-round, and half-moon.

The last step in the process is for the jade bangles to be polished in a traditional way using bamboo. Post the final touches, the bangles are rinsed with water to wash off any abrasives. Then, they are coated with wax to enhance and maintain their luster.

Now that you know about the traditional way of making a jade bangle, you must be wondering about the price paid for the labor and craftsmanship. Well, the best jade is as expensive in China as diamonds are in the United States! Fascinated yet?