What Are the Symptoms of Alzheimer’s Disease? 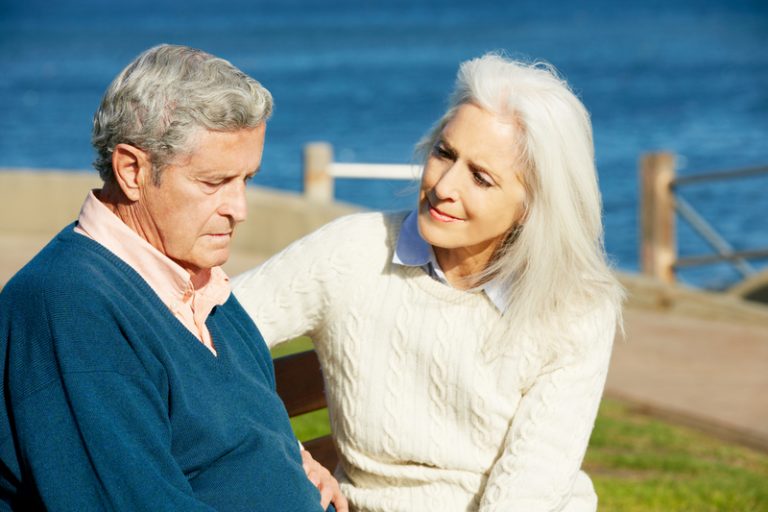 Alzheimer's Disease, and the awful realization that your loved one no longer recognizes you. (Image: Monkey Business Images via Dreamstime)

Seeing a loved one permanently retreat into a world of their own, where they may suddenly or gradually no longer recognize you, or anyone else, ramble off on their own, be found wandering about the street, and talk incoherently is a frightening and sad reality. Alzheimer’s disease is non-discriminatory; it attacks every social class and race.

Some of the signs and symptoms of Alzheimer’s

According to the Mayo Clinic: “Alzheimer’s disease is a progressive neurologic disorder that causes the brain to shrink (atrophy) and brain cells to die. Alzheimer’s disease is the most common cause of dementia — a continuous decline in thinking, behavioral and social skills that affect a person’s ability to function independently.”

In the early stage of Alzheimer’s, people with the disease will have noticeable language barriers. Among them, difficulty in finding words is the most obvious. It is often shown as the lack of substantive words in spoken language and it is difficult to express specific meanings and name objects; it is impossible to use nouns to call out specific objects.

As the disease progresses, the patient’s disorder and confusion will gradually worsen, and then the symptoms of chattering will gradually appear, which makes it difficult for people to understand or grasp their meaning.

The decline of the patient’s understanding and judgment is mainly displayed in their difficulty in understanding their surroundings. This directly affects their judgment and reasoning of where they are or what they are doing. They can’t distinguish between the primary and the secondary, the essential or non-essential matters, so they can’t handle problems well.

The patient’s personality and character will change, and this change is mostly demonstrated as selfish, subjective, anxious, irrational, suspicious, and so on. Compared to their behavior prior to the onset of illness, some patients suddenly become withdrawn and self-centered, disinterested in the things around them, and lacking enthusiasm.

When the above symptoms are found, the patient must be taken for treatment quickly. Preventative measures for this disease need to be done before it becomes advanced.

Prevention and help for Alzheimer’s

It is recommended that people eat more beans, cereals, fruits and vegetables, and other foods to supplement a variety of nutrients, especially for the elderly.

Frequent brain exercise can protect the sharpness of the brain, promote blood circulation, and reduce the risk of developing the disease. Therefore, it is recommended that people use their brains actively and do more mentally stimulating activities such as playing chess, crosswords, reading, and writing. Moderate physical exercise is also indispensable as it can improve immunity and disease resistance, which is conducive to the prevention of the disease.

The elderly should communicate regularly with other people and participate in various types of social activities. These activities not only delay the decline of brain function, but also help to strengthen elderly people’s sense of social participation and reduce loneliness.

In summary, the symptoms of Alzheimer’s include memory and language impairment, as well as a decreased ability to understand and remember. These symptoms have a great impact on the individual, family members, and friends.

It is highly recommended that elderly people regularly eat a balanced diet, exercise moderately, actively participate in social activities, communicate more with family and friends, and exercise their brain capacity to prevent or guard against the occurrence of the disease.