Watch This Classic Russian Animation: ‘Hedgehog in the Fog’ 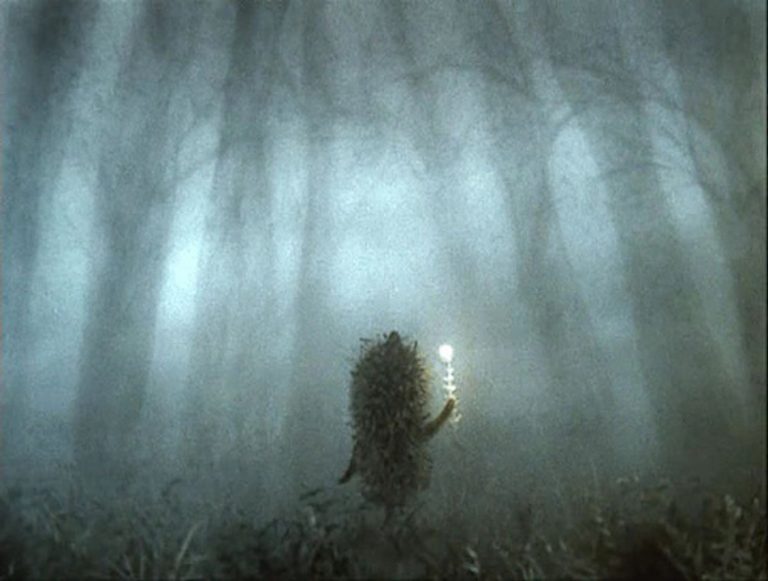 'Hedgehog in the Fog' is one of the most celebrated short Russian animation films of all time. (Image: via The Russian Culture Screenshot/YouTube)

Yuri Norstein’s 1975 Hedgehog in the Fog is one of the greatest lyrical stop-motion animated shorts to come out of Russia. The film is loaded with atmosphere, a unique soundscape, and is based on a Sergey Kozlov folktale of the same title.

Kozlov, a much-loved Russian children’s writer is known for his bedtime stories, which also keep parents enchanted. With the recurring characters Little Bear & Little Hedgehog, you can expect poetic stories about community, friendship, and the natural world. One of my favorites from these stories is where they climb a very tall pine tree at the end of each evening to polish the stars.

Hedgehog in the Fog film storyline

It’s a story of a hedgehog that is on his way to visit his friend, the bear, where they will drink tea and count the stars together. Along the way, his curiosity leads him to become lost in the fog, and he encounters a beautiful white horse.

He wonders aloud whether or not the horse would choke if it were to sleep in the fog. In the thick of the fog, he is confronted by objects and other animals, much to his anxiety. In the end, he makes his way out and meets up with the bear, who has been worried about the hedgehog. Little hedgehog is happy to be back with his friend, but he still can’t help wondering about the horse.

Animation technique and artists who were inspired by the film

The film is hauntingly beautiful and uses a special animation technique that consists of glass planes for movement and depth. It bleeds nostalgia, and if you listen — the sound is just incredible.

Yuri Norstein has inspired many filmmakers for that matter, such as Director Michel Gondry and acclaimed Japanese animator Hayao Miyazaki, who is quoted to have said that Hedgehog in the Fog was one of his “most precious favorites.”

Other animated films of that time in the 1970s were being made with very two-dimensional characters that lacked emotion. Yuri Norstein showed us another way the form could take on a deeper meaning. It’s remarkable for a 40-year-old film.

Yuri Norstein and his future projects

Yuri Norstein is one of the most celebrated Russian animators of his time, best known for his short films. He began making a feature in 1981 called The Overcoat, and is still making it now. There have been a lot of false starts and financial troubles, so there are only 25 minutes of the 65-minute film made. But, also due to his perfectionism, he has been nicknamed “The Golden Snail.”

Two of his long-time collaborators on the animations are his wife and artist Francesca Yarbusova, and cinematographer Aleksandr Zhukovskiy.

Another one worth looking at is his 1979 animation Tale of Tales, which is a non-linear animation about memories. The film plays out elements of a traditional Russian lullaby and the title is based on Turkish poem Tale of Tales by Nazım Hikmet. This Norstein film in particular has been compared with the work of another great Russian filmmaker, Andrei Tarkovsky, because of the memory and nostalgia. Or I’ve heard some even sum this film up as “Tarkovsky for Babies.”

A film about the history of Russian animation and censorship

If you want to find out more about Russian animation, watch MagiaRussica — “[A documentary that gives] a poetic view of Russian animation, and of cultural and social transformations Russian society has been gone through. It is about multi-faceted and humorous animation, almost never exposed to Western eyes.”

Animation films for children, along with children’s storybooks, were much easier to get past the strict censorship of that time under Soviet rule. That is why I think these works hold a certain appeal or magic for children and adults alike.