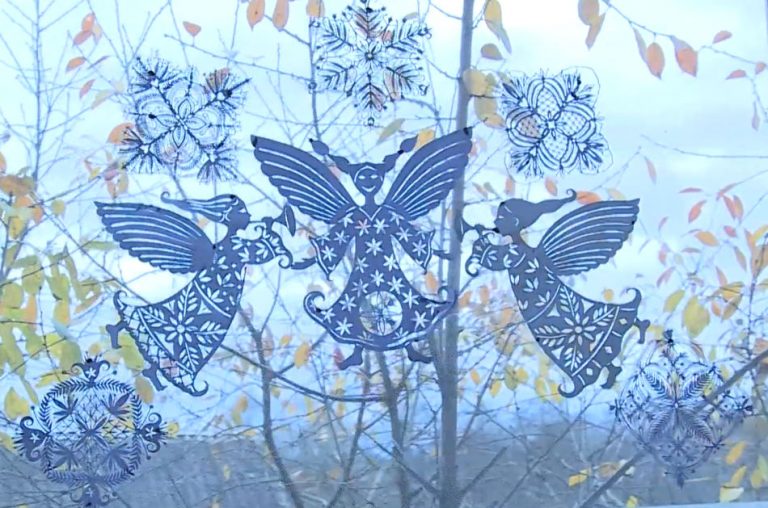 The papercut art of karpiniai has a long history in Lithuania, dating back to the 16th century. (Image: Screenshot via YouTube)

Art and artists are well-respected, and one such wonderful art form from Lithuania is karpiniai.

Wanderlust never feels completely satisfied unless a European country is added to your Instagram stories. One such scenic and picturesque destination is Lithuania. With its lush greenery, blue waters, and a sense of beauty all around, you can easily imagine a horse-drawn carriage while walking past the latest AI-powered car, or find yourself imagining all the fairy tales from childhood coming to life as you stroll through the streets in the evenings. Castles and forests make Lithuania a splendid place, but the land is not just for great pictures and snaps. The country has a rich history and culture.

Karpiniai is a form of papercutting that can be found in Lithuanian history as far back as the 16th century. While the craft itself has a much older history and story of origin, Lithuanians have embraced the craft and made it part of their traditions. Talking about the history of the papercutting art form, it was mentioned in the 4th century Han Dynasty not long after the invention of paper in China. The art form simply requires cutting a piece of paper to form intricate designs. This can be abstract, a proper image, or even a silhouette. The art form, though it sounds simple, is time-consuming, but very rewarding once you see the finished product.

Coming back to the tradition of Lithuania and karpiniai, what started in the 16th century as a form of decorative pieces for special events had become household décor by the 19th century. The most popular places for homes to display their creations were windows and lampshades, creating beautiful images on the walls.

While older designs were more about national themes and decorations, newer designs tend to lean more toward the abstract. But many artists have beautifully merged the older and the newer design ideas to create masterpieces. Julija Daniliauskienė, a well-known name in the world of papercutting, created stunning papercut designs that were the pride of every exhibition. Her most popular series were Seasons, Festive Song, and Motifs of Bands, which constantly merged nature with more bold and edgy designs. She contributed a lot to the popularization of the art of papercutting in Lithuania.

Traditional Lithuanian designs often used trees as motifs. The culture of Lithuania reflects the Indo-European culture where trees play a central role, especially as a spiritual motif. This art form is also a great way to showcase folk tales and local history. The main idea of the craft is that you fold the paper in half and start cutting the design. When you open the sheet, you will have the full image.

The Indo-European culture often speaks of the Tree of Life, which connects the three realms of heaven, earth, and the underworld. But it is the symmetrical nature of the tree that often makes it such a great muse. In fact, the Lithuanian karpiniai is known to have a certain musical feel to its designs and people often feel a spiritual connection with the creations, as if a story is being told by the artist and the soul of the spectator hears it.

Take up any Karpiniai papercutting images and you will see trees in their full glory. Blooming trees, weeping willows, oaks, cedars, and hazelnut trees play a prominent role in these designs. But it’s not necessary to stick to a single motif. Creativity is all about unleashing the dreams and visions that your mind shows you when you let your thoughts wander.

Taking inspiration from Julija Daniliauskienė, you can let poetry flow through your karpiniai. Create a scene of butterflies wandering through an abandoned warehouse or imagine a tree being the house for a family of humans. You can also look up various karpiniain motifs. With the world becoming closer, taking up a craft from another culture is the best way to understand it. You can find some easy designs to begin your journey into the world of karpiniai.