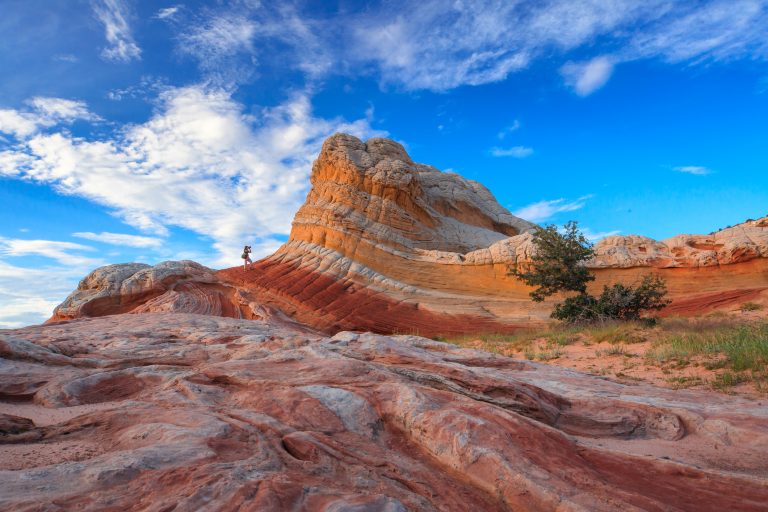 While it is hard even for geologists to explain the formation of White Pocket, they estimate that the structure has existed since the Jurassic period. (Image: Glebtarro via Dreamstime)

Located in the heart of the Vermilion Cliffs National Monument in Arizona is a large patch of white sandstone known as White Pocket. As you trek your way into the national monument, the greyish white layer of rock, spread across the entire area, resembles something similar to a mirage.

While it is hard, even for geologists, to explain the formation of White Pocket, they estimate that the structure has existed since the Jurassic period. The formation of contoured sediments that look like a layer of white marble is a result of plate tectonics, when the sand was saturated before it turned into rock. White Pocket has always been a sought-after destination, but lately, there has been an influx of tourists to witness the surreal grandeur of White Pocket.

But before you witness the splendor of the second most-visited place in the national monument, let us fill ourselves in on more details about their formation.

One of the world’s oldest geological wonders

White Pocket has been discreet in terms of attracting tourists over the years, partly due to the notorious trek to the sandstone patch land. However, recent coverage of the Vermillion Cliffs National Monument by National Geographic magazine garnered the attention of numerous adventures and photographers to White Pocket. The bedrock of white marble not only attracts tourists from Arizona, but from around the world.

Marc Dershowitz, a retired petroleum geologist, reveals that the landscape at White Pocket resulted from a huge sand-slide mass that followed an earthquake. The sand-slide occurred when a portion of the top of a tall dune detached and came sliding down rapidly. As the portion of the dune came spiraling down, it made the chunks of laminated sand beneath it rip up, which, in turn, intermixed with the basal part of the slide. The mass of sand eventually filled the oasis, which turned itself into the “cauliflower rock” that we see today.

The white sand rock bed features various contortions that appear to be small sand volcanoes. These structures are the result of the spontaneous unloading of the sand mass, which put tremendous pressure on the saturated sand that caused pressure adjustments. Marc points out as many as 25 features to support this theory.

Despite pressure from the dismantled dune, the cross-beds and fine laminae have been well preserved. Researchers conclude that the sand was buried under additional sediment of significant thickness. This means the side plane might have been several hundred feet below the surface.

White Pocket has become one of the more popular tourist spots in Arizona. Comparing the cost, climate considerations, and activities offered, The Waves and the White Pocket are a suitable getaway on any given day.

There is no dearth of accommodations available near White Pocket. You can take Highway 89A and find plenty of hotels, gas stations, and restaurants along the way. You may also travel to Arizona any time of the year, thanks to the dry, sunny weather, warm temperatures, and low humidity.

The photogenic white sandstone rock-bed is a tough trek, but it is certainly worth the visit.