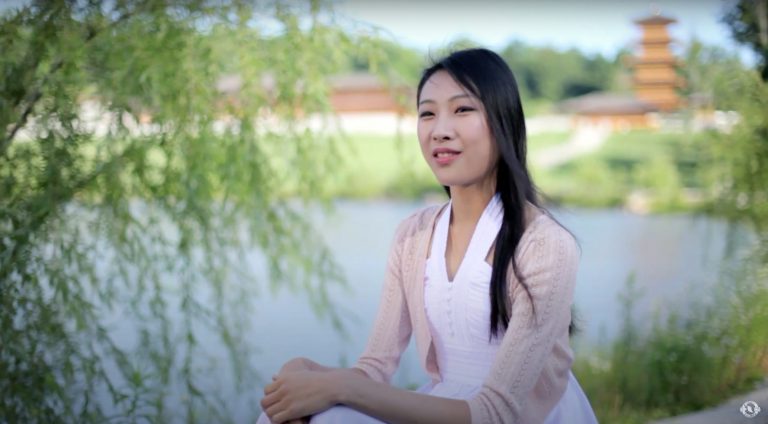 Chelsea Cai is a principal dancer from the prestigious Shen Yun Performing Arts troupe who gives an intriguing glimpse into her craft.

Shen Yun Performing Arts is a classical Chinese dance and music company based in New York that tours worldwide. Their goal is to revive traditional Chinese culture, which was almost destroyed completely during China’s cultural revolution.

As a child, Chelsea’s mother made every effort to shape her into a young lady with traditional values.

Chelsea learned to play the pipa and flute at an early age, along with Chinese calligraphy and traditional Chinese dance. Her mother hoped she would pick up the habit of good posture through her dance training. At the age of five, Chelsea became interested in dance and choose this path for further study.

These traditional values, sadly, are values that are often disregarded in modern society. She believes that people really need to look inside and develop a deep understanding to be able to present something beautiful on the outside.

Chelsea studied dance at Fei Tian Academy of the Arts and began touring with Shen Yun in 2008. At New Tang Dynasty Television’s International Chinese Classical Dance Competition, she won a gold medal in the junior women’s division and won silver in the 2009 and 2010 women’s adult division.

The ancient Chinese concept of working together

Chelsea noted that because the dancers from Shen Yun are together every day, they feel as if they are moving as one when performing on stage. There is a real awareness among the dancers regarding each other and their surroundings, and this is reflected in their seamless movements during each performance.

Every dance in Shen Yun has its own unique meaning. Chelsea references an introduction to the Mongolian ethnic chopstick dance with the concept about working together. The master of ceremonies said:

“One single chopstick is easier to break than a bunch.”

This idea of working together applies to every dance performance. If only one person does well on stage, it’s meaningless, because the audience doesn’t see just one person; they see the entire performance. Everyone needs to do well — this is everyone’s strength.

Positive messaging to lift an audience

“I believe that art forms created with pure and clean intentions will radiate positive energy that will benefit the audience.”

“I want the audiences to get something out of our show, to receive the message, and to realize that there is more beyond the materialistic things in life. So even when they are depressed, they can pull themselves through depressions or even bad situations and keep going in life.”