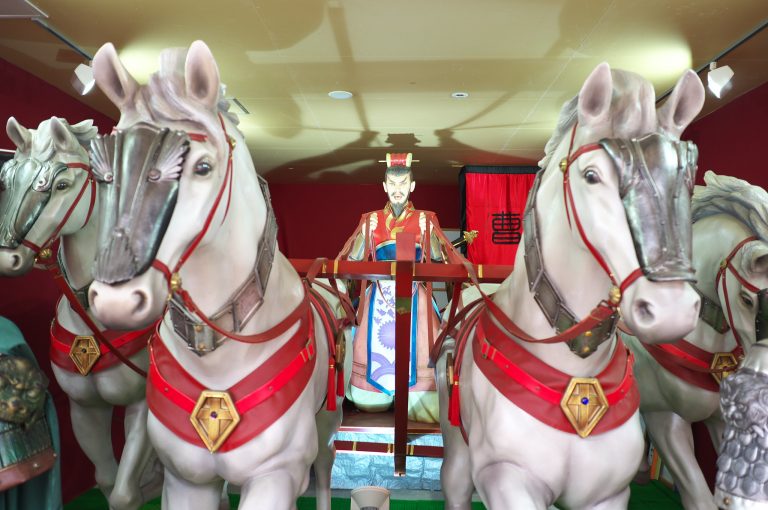 During the Three Kingdoms period, the momentous story of Cao Cao “cutting off the head” has been passed down through the ages. When his troops passed through the wheat fields, he ordered his officials and soldiers not to trample on the wheat and should anyone violate this order, they would get beheaded in public.

For this reason, Cao Cao’s officers and soldiers dismounted from their horses and with their bare hands to support the wheat stalks, they carefully stepped through the wheat fields in a neat line one after another.

Cao Cao was Commander-in-Chief, the Prime Minister, and he led by example

Cao Cao was Commander-in-Chief and also the Prime Minister. He was much beloved and respected. Cao Cao was riding a horse chariot passing through a wheat field. Just then, a bird flew up and startled his horses. His startled horses bolted right through the wheat field and trampled on the wheat.

Cao Cao was a man of strict self-disciple and led by example. He bravely asked his marshal to enforce the law that he himself had set. The marshal refused. Cao Cao then wanted to kill himself with his sword and everyone, including his worried officers, tried to dissuade him.

At this time, Cao Cao’s adviser, Guo Jia, stepped forward and said: “In the Spring & Autumn Annals, it is stated that the law does not apply to the King, Prime Minister and Commander-in-Chief who leads the army and has a heavy responsibility, so, how can you kill yourself?”

Cao Cao then slowly said: “Since the Spring & Autumn Annals have stated that the law does not apply to law formulators and moreover I shoulder the important task entrusted to me by the Emperor, in this case, I save myself from death for the time being, but I cannot dishonor my words, so I should be punished for the mistake I have committed.”

After he had spoken, Cao Cao cut a handful of his hair with his sword, threw it on the ground, and said: “I cut my hair to represent my head.” The brave Commander then said: “The Prime Minister trampled on the wheat field and should have been beheaded in public; now I cut my hair instead of my head.”

Power of symbolism for the Commander-in-Chief

The ancients emphasized that the body, hair, and skin belong to the parents. In Cao Cao’s case, cutting his hair could be regarded as a serious crime of unfilial piety and a great disrespect to his parents, not to mention it was the Prime Minister’s hair!  Therefore, in the eyes of the people at the time, Cao Cao cutting his hair was equivalent to beheading himself in public.