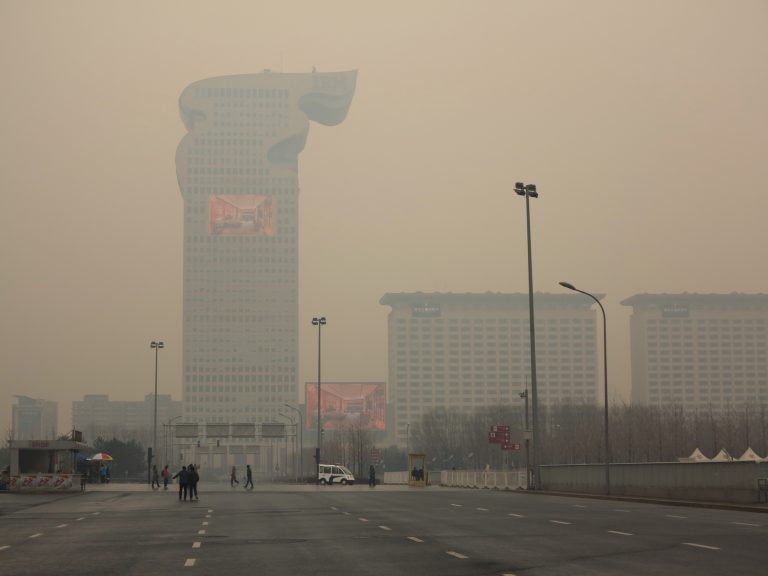 China’s capital city woke up to dust-choked skies on March 15 as it experienced what its weather bureau has called the worst sandstorm in a decade.

The thick dust shrouded Beijing’s iconic landmarks, including the Forbidden City, and downtown skyscrapers at times disappeared from view, enveloped by clouds of sand. Traffic was snarled throughout the city and more than 400 flights out of the capital’s two main airports were canceled as visibility in the capital was reduced to less than 1,000 meters.

China’s National Meteorological Center issued a yellow alert on the morning of March 15, saying blowing sand and dust coming from the Gobi Desert in neighboring Mongolia would affect 12 provinces and regions across the north, from Xinjiang in the far northwest to Heilongjiang in the northeast and Beijing.

“This is the most intense sandstorm in China in the past 10 years, and the area affected by the sandstorm is also the most extensive in the past decade,” the center said in a memo on its website.

The Beijing Meteorological Observatory warned that city residents should wear masks, gauze, or other dust-proof products when going out and wash their faces when they return home. The elderly, children, and people suffering from respiratory conditions were also warned to stay inside as the storm caused an unprecedented spike in air pollution measurements.

Beijing’s air quality index, which last year averaged around 80, saw readings at 999 on March 15. The U.S. Environmental Protection Agency considers 100 or less on the index to be acceptable and its highest health warning level is pegged at 301 or higher.

Such storms used to occur regularly in the springtime due to Beijing’s proximity to the massive Gobi Desert, as well as deforestation and soil erosion throughout northern China.

Reforestation efforts have been ongoing over the past several decades in an attempt to halt the desertification of the region and to limit how much sand is blown into the capital. Beijing has planted a so-called “great green wall” of trees to trap incoming dust and has also tried to create air corridors that channel the wind and allow sand and other pollutants to pass through more quickly.

However, dust was churned up by a snow squall that moved through Mongolia over the weekend. The storm toppled electrical towers, knocking out power in several regions, and killed at least nine people.

China has also been suffering from relatively high levels of pollution in recent weeks, as a sharp rebound in China’s energy use and emissions output reflected a ‘dirty recovery‘ as Beijing targeted the dirtiest and most energy-intensive sectors — construction, heavy manufacturing — to offset weakness elsewhere.

The perfect storm of northern winds and high levels of pollution combined to create the dangerous pall over the capital city.