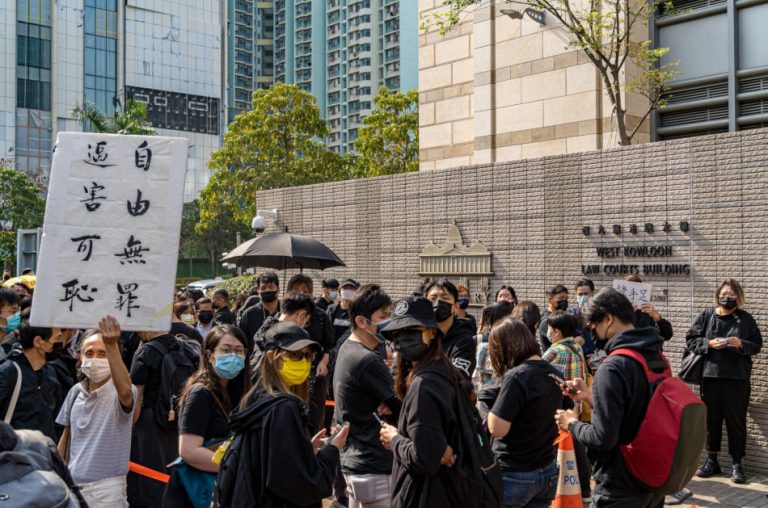 Family and supporters stand outside the West Kowloon Law Courts Building in Hong Kong to wait for the results of the trial of the 47 pro-democracy activists who organized a primary election in July 2020. (Image: Studio Incendo via flickr CC BY 2.0 )

The 600,000 people who took part in the informal Hong Kong Legislative Council primary polls organized by pro-democratic parties in July 2020 have been met with vicious retaliation by the Hong Kong government. The government charged 47 pro-democracy activists who set up the primaries with conspiracy to subvert state power under its National Security Law. After a four-day and three-night grueling trial, the government continued to detain all of them.

Suffering along with the 47 political prisoners were families, friends, and supporters of the democratic movement in Hong Kong, who waited outside the court. Facing a Communist-backed coup d’état and deprived of Hong Kong people’s freedom, they have to wipe away their tears and look for hope in the darkness and despair.

On March 4, when the four-day trial was near its end, 15 of the defendants were granted bail by Chief Magistrate So Wai-tak, a judge appointed under the National Security Law. But the Hong Kong government’s Department of Justice immediately filed a review, keeping all 47 defendants in custody that same day when they were supposed to reunite with their families.

When the glimpse of hope of reunion disappeared, Elsa, the adopted mother of the accused social worker Lui Chi-hang, was overcome with emotion. She ran out of the courtroom, crying and screaming with grief to the reporters: “None of them can be released… the rule of law is dead,” and then fell to her knees and wept as others comforted her.

The families and close friends of the 47 political prisoners endured four days of trial, and no one could imagine the pain they went through. Despite the suffering and the long days, they wiped away their tears and continued to speak out against tyranny on behalf of their loved ones. Hong Kong’s media compiled some of the words spoken by family members, relatives, and friends in interviews outside the courtroom.

Elsa, Lui Chi-hang’s adopted mother, said: “I want to tell the Communist Party that what you have done is wrong! When the people who framed the innocent Hong Kong people reach hell, you will be burned alive. When God returns, he will make the judgment. If you don’t repent and confess your sins, you will be punished.”

“What these 47 people did is for the good of Hong Kong. This Communist government has ruined and corrupted Hong Kong, and we will not let it get away with it. We will continue to persevere and do what is right. We, the people, will uphold God’s compassion and righteousness. And they, the evil force, will surely get their retribution.”

Elsa encouraged her adopted son: “Hang in there, God is with you. We are Christians, and our mission is to carry the cross and sacrifice, so we are not afraid… Of course, I am heartbroken; even though he is not my biological son, we raised him for more than ten years. When he was young, he suffered a lot of abuse. My husband and I have taught him well, and he grew up to be a good man — loving and righteous, and I am proud of him.

The Civil Human Rights Front’s current convenor, Chan Ho-hwan, said: “This government has simply lost humanity. Over the past few days, the trial has tormented the activists, their families, friends, and Hong Kong people. But we call on everyone not to give up the fight for democracy and freedom. As the defendants left the courtroom, they shouted, ‘Hong Kong people, hang in there, keep going,’ and I hope we can all do the same.

“From the arrest of pro-democracy leaders under the National Security Law to the change of the electoral system today, this is a coup d’état, a subversion of the people’s choice.

“In the past few days, through the newspapers, the defendants are encouraged by people lining up in the early morning to show their support and solidarity.”

Translated by Eva and edited by Angela