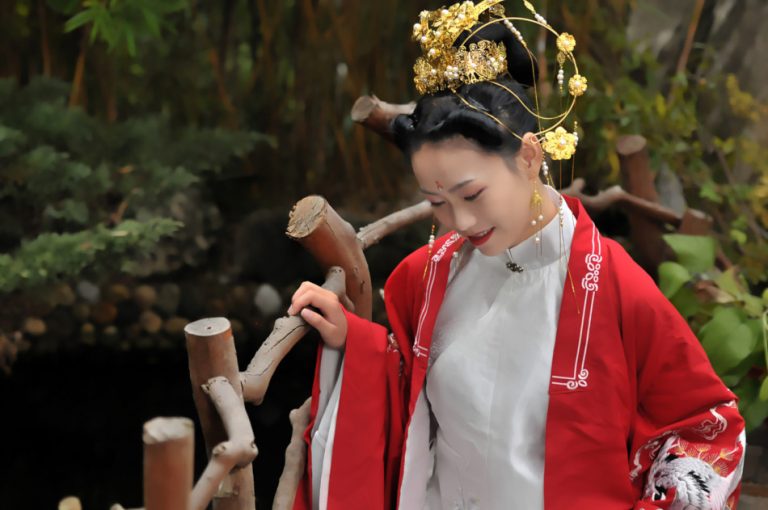 Women in various cultures and countries adhere to certain habits and norms as far as clothing and hairstyle are concerned. Traditionally in China, people wore clothes and accessories to reflect their positions in society, and women adhered to customs for hairstyles and the wearing of Chinese hair accessories. However, over the ages, these styles developed and changed in various ways.

In ancient China, people throughout society believed in structuring their lives according to Confucianism, and much importance was given to rituals. As part of the body, the hair was considered to be unclean and offensive if it was allowed to be seen in an untidy state. So Chinese males after 15 years of age would tie their hair into a bun. Females did the same, only adding a hairpin.

It is hard to pinpoint the time when the custom of wearing hair accessories began. People started by wearing simple headgear made of branches, vines, or cloth as a way to organize their hair and keep it out of the way while they worked. Later, such hair accessories transformed into something strictly decorative.

The shubi is one of the prominent Chinese hair accessories that was used a lot by women in the past. There were two types. “Shu” had teeth that were thick and spaced further apart. It was useful for combing hair. “Bi” had fine teeth spaced very close together and its purpose was for removing dirt from the hair. During the Wei and Jin dynasties, the shubi began its transformation from a tool women used to take care of their hair into something used for decoration.

The wearing of shubi reached the height of its popularity during the Tang and Song dynasties. Women would have a towering bun of hair decorated with several combs, some of which were not open-toothed, but instead were comb-shaped pieces of gold inserted in the front of the bun. Over time, the number of shubi increased as symmetry was considered important and it was not uncommon to see women with shubi inserted in groups of two or even six.

These Chinese hair accessories were originally called “ji,” but after the Han and Qin dynasties, it became known as “zan.” Early hairpins were made from diverse materials like bamboo, stone, and bone and had a primitive, rustic look. By the Shang and Zhou era, the look of the hairpin’s head changed. There was more diversity, with some being fashioned into geometric shapes, others being umbrella-shaped, and still others being fashioned with a variety of bird or animal shapes. During the Qin and Han dynasties, the craftsmanship became more and more elaborate, with materials like gold, jade, and even feathers being used.

Zan was popular in the imperial court during the Qing Dynasty, when it was considered the top accessory for an imperial concubine. Great care was taken in making zan, with materials like coral, ivory, and jadeite being used. During this time, the variety and styles of hairpins in use surpassed those of previous eras.

Chai is another one of the traditional Chinese hair accessories. It was made using silver, pearl, jade, and gold that was fashioned into floral or other shapes, then attached to the two or more pins that would be inserted into the hair bun. Women in China wore chai in different ways. Probably the most popular way was to wear two chai with the same pattern, one on each side of the bun.

This accessory served another use in ancient times. It was a token of farewell among couples. Women would divide their chai when facing separation from their partners, giving half to him and keeping the other half herself, to be rejoined on the day they were reunited.

Buyao literally translates into “step, shake.” These Chinese hair accessories had a design style inspired by zan and chai. Its distinctive feature is that it had pendants or fringe along with beads hanging off the head of the pin that would shake every time the woman took a step. During the Han Dynasty, only noblewomen of the royal family could wear them and they were generally made of gold, silver, jade, and other precious materials. But by the Tang Dynasty, buyao could be seen everywhere, being worn by both commoners and nobles alike.

This is a special type of hair accessory also known as “kingfisher feather art.” Kingfisher feather art, a craft that started in the Han Dynasty, involved setting the bright blue feathers of a kingfisher’s back into a base of metal in different patterns. Then, the headdress would be set with pearls, jadeite, and other gems. It was a painstaking process in which every step tested the craftsman’s skill. The finished piece was very beautiful, but also very fragile.