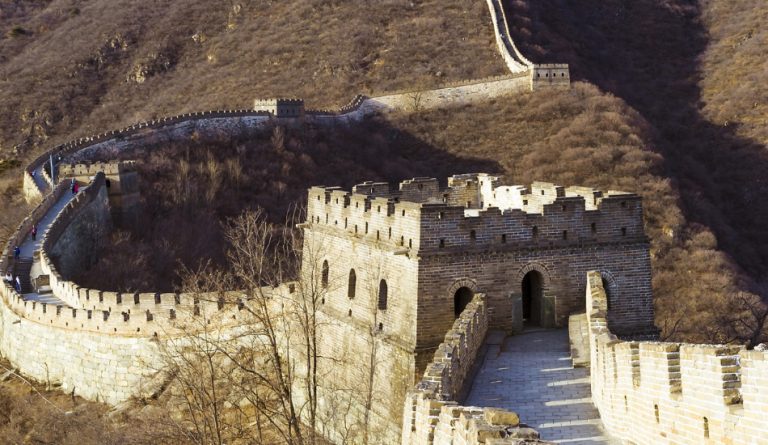 In 221 B.C., Qin Shi Huang conquered the Six Kingdoms and established the first great unified regime of China. He then began a series of substantial political directives, such as unifying weights and measures, unifying the country’s writing system, and implementing a centralized system to manage state affairs. Externally, he defended his territory against the Xiongnu and expended his efforts to build several major projects.

Although Qin Shi Huang ruled for only 37 years, he accomplished many unprecedented initiatives, leaving a large number of magnificent projects for future generations. Some of these projects are still in use today.

The Qin Straight Road was a major project on the same scale as the Great Wall and the Mausoleum of Qin Shi Huang. The total length of the road was 500 miles, most of which were connected roads, constructed during the Warring States period.

After the unification of the Six Kingdoms, Qin Shi Huang constructed the road with 100,000 militiamen in just over two years to defend against the Xiongnu. The highway was more than 65 yards wide at its widest point and averaged around 20 to 30 yards. It was a difficult project without modern measuring tools. Also, the route took it over many mountains.

The Dujiang Weir is located in the city of Dujiang, Sichuan Province. It was built in 256 B.C. by the governor of Shu County Li Bing in the State of Qin during the Warring States period. It consists of the Fish Mouth Weir, the Feisha Weir, and the Baoping Mouth.

They used simple methods and followed the way of nature. It was the first water conservancy project in the world, and it is still in use after more than 2,000 years.

3. The Great Wall of China

The Great Wall was a fortification of the Six Kingdoms. In 214 B.C., Qin Shi Huang sent General Meng Tian to oversee the construction of more than 10,000 miles of additional wall west to Lintao, Gansu,  and east to Liaodong. Known as the “Qin Great Wall,” it was constructed to prevent invasion by the Xiongnu.

After the establishment of the new sections to the Great Wall, the Qin Straight Road was built to the Qin Imperial Palace as a military highway to facilitate the rapid dispatch of troops to the wall.

According to the Book of Later Han, it took about 10 years to build the Zheng Canal, which was an irrigation project to divert Jing water into the Luo River. The project supported thousands of acres in Guanzhong, making the Central Plains fertile, and greatly enhancing Qin’s economic strength.

Although the Zhengguo Canal was a manmade project, it followed the course of nature. It and other water conservation projects nourished the Guanzhong Plain, recognized as the hinterland of Chinese civilization.

5. Mausoleum of the First Emperor of Qin

The Mausoleum of Qin Shi Huang is located in the northern foothills of Mount Li, just east of the city of Lintong in Xi’an, Shaanxi Province. Although it has not been excavated, as it is located in a corner of the famous Terracotta Warriors.

Qin Shi Huang began preparations for the construction of his tomb in the second year of his accession to the throne. The mausoleum was planned and designed by Prime Minister Li Si, and supervised by General Zhang Han. For a period of 38 years, the underground palace grew more massive than any other project at the time.

The tomb displayed many treasures and was surrounded by a large number of burial pits and tombs of differing shapes and sizes, of which more than 400 have been identified, including the Terracotta Warriors.