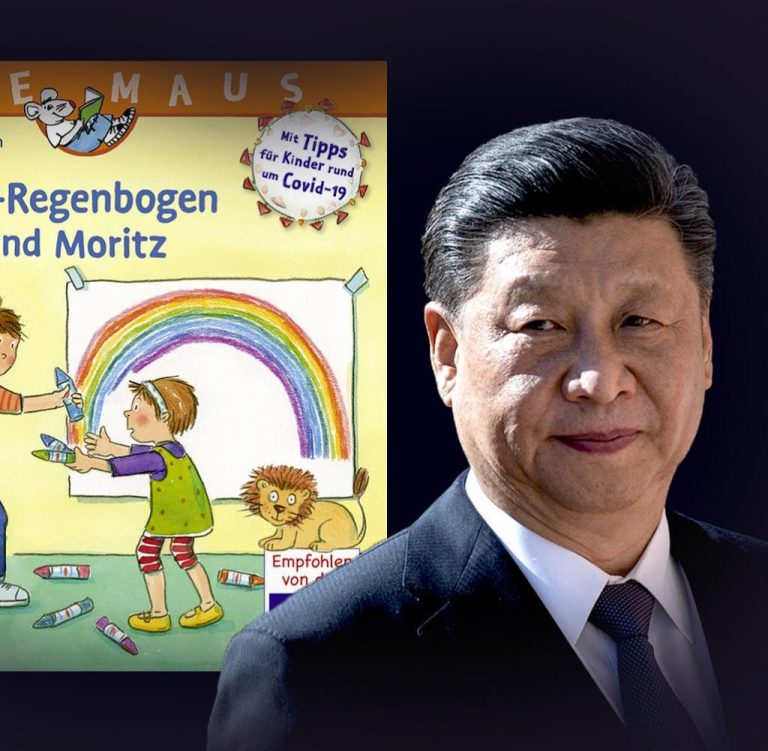 While the Chinese Communist Party use every tactic to suppress freedom of speech, freedom of assembly, and freedom of religion in China, they brazenly and unashamedly demand the exercise of free speech in Germany for themselves to suppress a children's book. (Image: via welt.de)

Ever since the coronavirus pandemic hit the planet, controversies surrounding the Chinese government’s human rights and other worrying aspects of its practices go on unabated. Now, ironically, pressure from the CCP has forced a German publisher to destroy a children’s book based on the impact of the COVID-19 pandemic on children.

The German publisher faced the wrath of Chinese Communist Party (CCP) diplomats, as well as pro-CCP individuals in Germany. That campaign forced it to take the decision to make changes in the book’s content. The title of the disputed book unveiled last year is A Corona Rainbow for Anna and Moritz. Its aim was to help children stuck in the pandemic situation to deal with the unprecedented changes for them.

Ironically, the CCP took serious objection to the content of the German children’s book

The CCP and some Chinese readers took serious objection to the content of the book. In one section, the father of the kids in the book says: “The virus comes from China and has spread out from there across the whole world.” The majority of media outlets and researchers believe that the killer pandemic actually did emerge from Wuhan, located in central China.

However, the CCP has denied the charges vehemently. It also accused the U.S. military of bringing the virus to China. However, it has never produced any evidence of such counterclaims.

The Chinese community in Germany also took serious objection to the content of the book. They gave a low rating to the book on Amazon and posted negative reviews online as a mark of protest.

They made accusations that the book was used to spread racism and discrimination. Some of the Chinese readers also said that they might take legal action against the german publisher if they did not oblige. Ironically, the protest campaign was supported by the CCP Chinese consulate in the city of Hamburg.

The Global Times, a CCP mouthpiece, stressed the need to recall the book. In fact, a German-based Chinese lawyer said the book has “caused psychological trauma to the Chinese community, especially to the kids. For such reasons, Chinese people in Germany had a stronger reaction than usual about this children’s book that may trigger racial discrimination and hatred.”

This made the Carlsen Publishing House backtrack and it said printed copies will be destroyed. It expressed an apology for the hurt caused to the Chinese community as well.

It is not the first time the Chinese community has reacted to a book deemed unsuitable for its image. The practice of book burning can be traced back to the times of Mao Zedong. The young red guards burned countless religious icons, books, and buildings. In Northwest China’s Zhenyuan County, a collection of books was burned in 2019.

The book in question was published in June 2020 by Carlsen Verlag. The German publisher said that from the next edition, the objectionable content will be rectified.

While the reaction of the Chinese readers to the book may seem over the top, or reasonable, depending on your point of view, instances of harassment and violence toward Asians and the Chinese community have stepped up, which is very regrettable. This is evident from the time of the COVID-19 breakout, which the Chinese people had nothing to do with.

Former U.S. President Donald Trump criticized the conduct of the Chinese government at that time for their failure to alert the outside world of the fast-spreading danger, and he called COVID-19 the “China virus.” His administration insisted it was leaked from a Wuhan laboratory. This charge was strongly denied by the Chinese foreign ministry.

While the Chinese backlash has forced the German publisher to backtrack, the origin of the coronavirus remains unclear, and investigations are ongoing. Beijing has suggested that the killer virus was detected first in the Wuhan lab, but its origins could be elsewhere. The WHO also said the virus’s origin has to be located and the search should start at Wuhan. It has asked for in-depth investigations to unveil the truth.

Unlike life under the Chinese Communist regime, where people have no rights whatsoever, people in the West can still protest, raise their voices, and criticize openly. In this instance, the German publisher, Carlsen Verlag, listened to that criticism and the concerns raised and decided to make changes to its publication. No value judgment about their decision is made. For a publisher, this is never an easy thing to do.