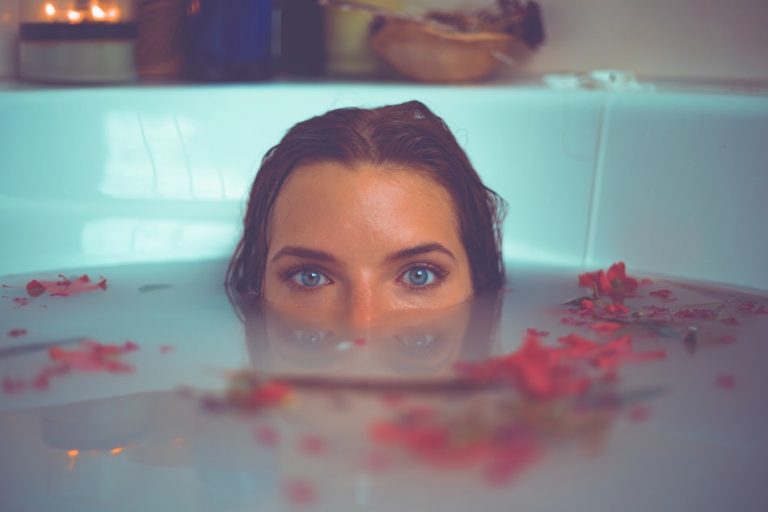 A long, hot soak with essential oils and fragrant body wash is the ultimate recipe for relaxation after a tiring day. (Image; Timothy Dykes via Unsplash)

A long, hot soak with essential oils and a fragrant body wash are the ultimate recipe for relaxation after a tiring day. Today, bathing is a private exercise that helps us de-stress and revitalize. But historically speaking, this is a relatively new development. Throughout history, the activity of bathing was mostly public or else tied to cleansing bathing rituals for religious or spiritual practices. So how did bathing become the personal, relaxing activity that we now enjoy?

To answer that, let us take a peek at the history of bathing and how this private ritual can lead to myriad physical and psychological benefits.

Everyone may have heard the phrase “cleanliness is next to godliness” and in ancient cultures, it was held to be literally true, with sites for public bathing being considered sacred. In the early 1900s, archaeologists discovered a high mound at the site of the 250-acre city of Mohenjo Daro.

Thought to have been in use around 2500 B.C., they labeled the site “The Great Bath.” Scholars agree that the public water tank would have been used for special religious occasions, as ritualistic cleansing was a crucial part of partaking in social and religious activities. In fact, throughout Asia and India at that time, bathing the body was linked with cleansing the spirit and incorporated bathing rituals.

When it comes to bathing as recreation, we have the Greeks and Romans to thank, as they were really the pioneers behind this idea. Public baths in the Roman Empire were open to the rich and poor alike. People, irrespective of class, would pour into the public baths not only to cleanse themselves and relax, but also to socialize and even to conduct business.

Around 300 B.C., public bathing was as much about socializing as it was about getting clean. Roman baths had a reception room at the entrance and from there, you could access separate rooms depending on whether you wanted to bathe in hot, warm, or cold water. Bathers were also encouraged to exercise as they moved through the different rooms. As a result of the Crusades, public bathing started spreading across the ancient world.

With the decline of the Roman Empire, public bathing went out of style, as the Byzantine Empire adopted and modified the practice. They preferred to bathe in a more private setting with beautifully elaborate mosaic walls. They also eliminated cold water as a bathing option.

Eventually, the idea of building baths around thermal hot springs came into vogue. This is how the famous Hungarian baths came to be, and they continue to exist as spas that can be enjoyed by the public even today.

Due to the spread of disease, Europeans started to avoid baths. By the time they arrived in the Americas, Colonists had developed the idea that submerging one’s body in water would weaken the immune system. There is historical evidence that Native Americans tried to convince them they were wrong, but they were largely unsuccessful in their efforts.

Later, in both Europe and the Americas, cholera became a threat and this led to better water and sewage treatment. This, together with the widespread availability of indoor plumbing, sparked a renewed interest in bathing.

According to a study conducted in Japan in 2018, submersion in water as hot as 100°F has health benefits like helping to reduce stress, body pain, and fatigue, and it helps improve your skin’s condition. The researchers believe the improved mental and physical states come about due to improved circulation stimulated by warm water, which helps the body eliminate toxins.

Besides the aforementioned benefits, bathing has other psychological benefits as well. According to one study, taking a bath in hot water proved to be an effective therapy to lessen symptoms of depression.

The secret to a peaceful bath time starts with some warm water. You can enhance the experience with some essential oils and scented candles if you like. Eliminating visual clutter from your bathroom may help you in getting a feel-good experience.

You can put things like bath bombs in while adding water to the tub. Or if you have sore muscles, try adding Epsom Salts. Regular oatmeal can be added, too. It is well known for its skin softening and soothing effects. These are all aspects of modern-day bathing rituals.

With attention to a few little details, you’ll be sure to enjoy a most revitalizing bath at home.