Powerful Stratospheric Winds Measured on Jupiter for the First Time 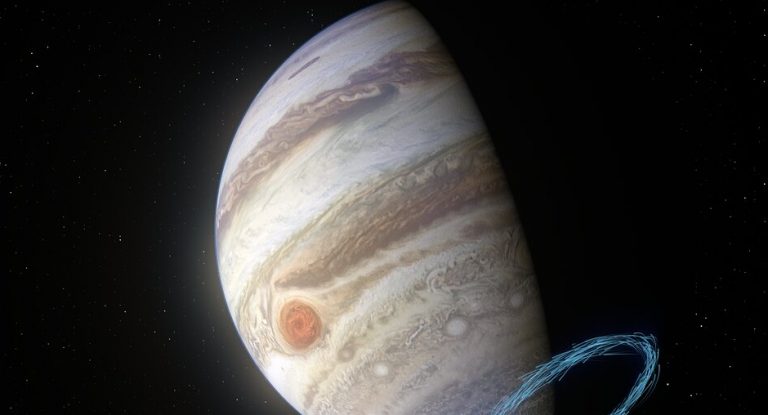 This image shows an artist’s impression of winds in Jupiter’s stratosphere near the planet’s south pole, with the blue lines representing wind speeds. These lines are superimposed on a real image of Jupiter, taken by the JunoCam imager aboard NASA’s Juno spacecraft. Jupiter’s famous bands of clouds are located in the lower atmosphere, where winds have previously been measured. But tracking winds right above this atmospheric layer, in the stratosphere, is much harder since no clouds exist there. By analysing the aftermath of a comet collision from the 1990s and using the ALMA telescope, in which ESO is a partner, researchers have been able to reveal incredibly powerful stratospheric winds, with speeds of up to 1,450 kilometres an hour, near Jupiter’s poles. (Image: via ESO)

Jupiter is famous for its distinctive red and white bands — swirling clouds of moving gas that astronomers traditionally use to track winds in Jupiter’s lower atmosphere. Astronomers have also seen, near its poles, the vivid glowing known as aurorae, which appear to be associated with strong winds in the planet’s upper atmosphere. But until now, researchers had never been able to directly measure wind patterns in between these two atmospheric layers, in the stratosphere.

Measuring wind speeds in Jupiter’s stratosphere using cloud-tracking techniques is impossible because of the absence of clouds in this part of the atmosphere. However, astronomers were provided with an alternative measuring aid in the form of the comet Shoemaker-Levy 9, which collided with the gas giant in spectacular fashion in 1994. This impact produced new molecules in Jupiter’s stratosphere, where they have been moving with the winds ever since.

A team of astronomers, led by Thibault Cavalié of the Laboratoire d’Astrophysique de Bordeaux in France, have now tracked one of these molecules — hydrogen cyanide — to directly measure stratospheric “jets” on Jupiter. Scientists use the word “jets” to refer to narrow bands of wind in the atmosphere, like Earth’s jet streams. Cavalié said:

“The most spectacular result is the presence of strong jets, with speeds of up to 400 meters per second, which are located under the aurorae near the poles.”

These wind speeds, equivalent to about 1,450 kilometers an hour, are more than twice the maximum storm speeds reached in Jupiter’s Great Red Spot and over three times the wind speed measured on Earth’s strongest tornadoes. Co-author Bilal Benmahi, also of the Laboratoire d’Astrophysique de Bordeaux, explained:

“Our detection indicates that these jets could behave like a giant vortex with a diameter of up to four times that of Earth, and some 900 kilometers in height. A vortex of this size would be a unique meteorological beast in our Solar System.”

Astronomers were aware of strong winds near Jupiter’s poles, but much higher up in the atmosphere, hundreds of kilometers above the focus area of the new study, which is published in Astronomy & Astrophysics. Previous studies predicted that these upper-atmosphere winds would decrease in velocity and disappear well before reaching as deep as the stratosphere. “The new ALMA data tell us the contrary,” says Cavalié, adding that finding these strong stratospheric winds near Jupiter’s poles was a “real surprise”.

The team used 42 of ALMA’s 66 high-precision antennas, located in the Atacama Desert in northern Chile, to analyze the hydrogen cyanide molecules that have been moving around in Jupiter’s stratosphere since the impact of Shoemaker-Levy 9. The ALMA data allowed them to measure the Doppler shift — tiny changes in the frequency of the radiation emitted by the molecules — caused by the winds in this region of the planet. “By measuring this shift, we were able to deduce the speed of the winds much like one could deduce the speed of a passing train by the change in the frequency of the train whistle,” explains study co-author Vincent Hue, a planetary scientist at the Southwest Research Institute in the US.

In addition to the surprising polar winds, the team also used ALMA to confirm the existence of strong stratospheric winds around the planet’s equator, by directly measuring their speed, also for the first time. The jets spotted in this part of the planet have average speeds of about 600 kilometers an hour.

The ALMA observations required to track stratospheric winds in both the poles and equator of Jupiter took less than 30 minutes of telescope time. Thomas Greathouse, a scientist at the Southwest Research Institute in the US and co-author of the study, said:

“The high levels of detail we achieved in this short time really demonstrate the power of the ALMA observations. It is astounding to me to see the first direct measurement of these winds.”

Cavalié went on to say:

“These ALMA results open a new window for the study of Jupiter’s auroral regions, which was really unexpected just a few months back.”

Referring to the European Space Agency’s Jupiter Icy Moons Explorer (JUICE), which is expected to launch into space next year, Greathouse said:

“They also set the stage for similar yet more extensive measurements to be made by the JUICE mission and its Submillimetre Wave Instrument.”

This research is presented in the paper First direct measurement of auroral and equatorial jets in the stratosphere of Jupiter published in Astronomy & Astrophysics.