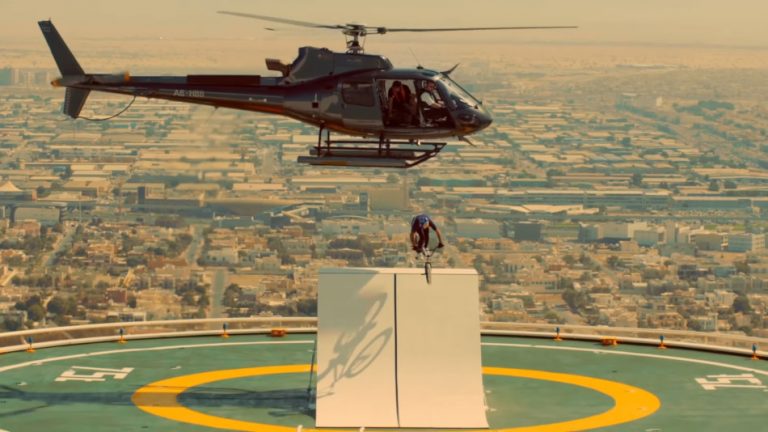 Kriss Kyle jumps out of a helicopter on his BMX bike and lands on a ramp set up on a helipad. (Image: Screenshot / YouTube)

Dubai is the ultimate destination for making jaw-dropping BMX videos. Hoards of BMX riders have performed stunts across some of the most famous landmarks in the city. Dubai is the most-sought destination for any BMX rider for myriad reasons. Tall buildings, massive abstract structures, bustling street corners, and huge water parks coupled with the stunning Dubai skyline are what make the city a natural destination for bikers. But did you ever think you’d see a stunt that started with someone dropping out of a helicopter onto the roof of a 60-story skyscraper?

Kriss Kyle, remembered by many for his mind-bending video project “Kaleidoscope,” is once again teaming up with Red Bull to make a video filled with thrilling sequences of flips and drops, all showcasing some mad steeze.

In his new video, Kriss Kyle turns Dubai into his own BMX playground, taking the game to new heights by dropping out of a helicopter onto a ramp perched atop the Burj Al Arab hotel. He launches himself for a second drop off the helipad and onto the building’s roof, and the action keeps going from there.

Kriss only had one shot at filming the helicopter stunt because of the risk factor. Even for an expert biker like Kriss, the task was an extreme challenge because of wind coupled with the helicopter’s downwash. Kriss’s fear of heights only added to the extremity of the situation.

In an interview with Red Bull, Kriss said: “I had to program my whole body for it. It’s amazing what the human body can do, because I’m so scared of heights. Before flying out, and even on the plane, I kept saying to myself, ‘I’m doing this. No matter what, I’m definitely doing this.'”

As Kriss completed the jump, he said: “We actually planned to film the jump the day before. But due to a rare weather system at the time we planned the jump, we were forced to reschedule the attempt to the following day. Sadly, that meant for another sleepless night for me! Working on a Red Bull edit always means you get to challenge what’s possible and this was no different. I can’t thank Dubai Tourism enough for opening their doors and helping us make this film possible.” (GlasgowLive)

After the heli-jump, the 5-minute video captures Kriss doing stunts all around Dubai including flying through some twisting slides at the Wild Wadi Waterpark, during which he reaches speeds up to 100 mph, and ending with him hopping onto a moving boat and sailing away.

Best places for biking in Dubai

Dubai has myriad recreational landmarks for bikers, both beginners and hardcore trainers. Some of the most famous cycling spots in Dubai include Al Quadra Cycling Path, Nad Al Sheba Cycling Park, Al Warqa’a Jogging and Cycling Park, Dubai Autodrome, and Jumeirah Cycling Track. Besides these spaces, there are various cycling paths in Dubai, good enough for anyone who wants to get a ride in after a tiring day at work or on a leisurely weekend.