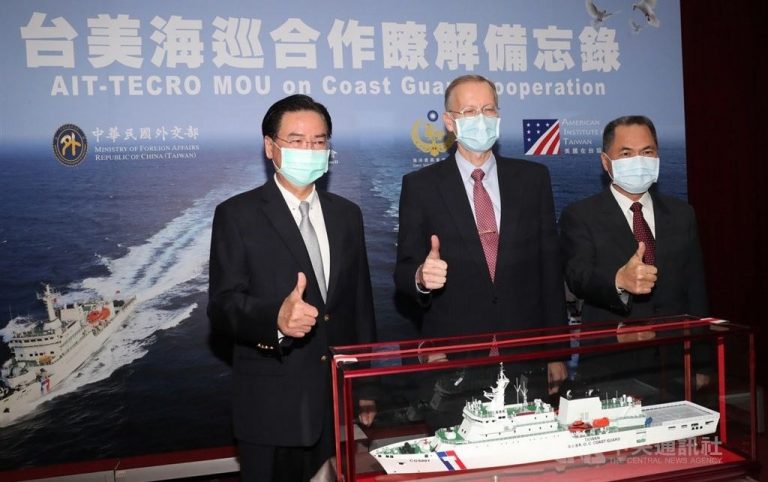 Taiwan’s Ministry of Foreign Affairs (MOFA) announced on Thursday, March 25 that it will sign a memorandum of understanding with the United States on a new Coast Guard pact.

American Institute in Taiwan (AIT) Director Brent Christensen, who was appointed to lead the de facto U.S. embassy in 2018, was joined by Taiwan’s Foreign Minister Joseph Wu at the announcement. Lee Chung-wei and Chou Mei-wu, who are the respective heads of Taiwan’s Ocean Affairs Council and Coast Guard Administration, were also present.

Minister of Foreign Affairs Joseph Wu noted that it was the first to be signed by Taiwan and the U.S. during the administration of U.S. President Joe Biden.

“Since President Biden’s administration took office on January 20, we have seen that relations between Taiwan and the U.S. have not only continued uninterrupted but, as the U.S. has described, are rock solid,” Wu said.

China has vast maritime claims in the South China Sea and also claims sovereignty over the Japan-controlled Senkaku Islands, which it calls Diaoyu. Taiwan also claims the uninhabited islands as Diaoyutai, but tensions between Taipei and Tokyo have never escalated to the point of confrontation.

In a tweet on Friday, Taiwan’s chief representative in the U.S., Bi-khim Hsiao, said: “The memorandum of understanding with the U.S. was expected to bring closer cooperation in maritime safety, humanitarian rescue, fisheries enforcement, and protection of the marine environment.”

The U.S. State Department’s Bureau of East Asian and Pacific Affairs also tweeted on Friday: “The U.S. could not be prouder to work side-by-side with such a good friend as Taiwan to tackle the world’s challenges.”

China’s Coast Guard, which is considered the region’s largest and already operates as an extension of its military in asserting its maritime claims, was quick to denounce the agreement that underscores growing ties between Washington and Taipei.

Foreign Ministry spokesperson Hua Chunying said on Friday, March 26 the pact violated U.S. commitments to China and called on the U.S. to “be cautious with its words and actions on Taiwan-related issues.”

“We urge the U.S. side to … refrain from sending any wrong signals to Taiwan independence forces, and refrain from encouraging and inciting Taiwan to expand its so-called international space,” Hua told reporters at a daily briefing.

Despite the harsh words, the U.S. and Taiwan’s plan to deepen maritime security ties in response to escalating “gray-zone” threats from China.

The Chinese government has vast maritime claims in the South China Sea and relies on its myriad of armed fishing militia to harass vessels of other nations, including Japan, Taiwan, Vietnam, Brunei, Indonesia, Malaysia, and the Philippines.

In the most recent confrontation, the Philippine military has ordered navy ships to be deployed for “sovereignty patrols” in the South China Sea, where a Chinese flotilla has swarmed around a disputed reef and ignored Manila’s demand to leave the area.

Philippine Defense Secretary Delfin Lorenzana demanded that some 200 Chinese vessels he described as militia boats immediately leave Whitsun Reef, a shallow coral region about 175 nautical miles west of the town of Bataraza in the western Philippine province of Palawan. China ignored the call, insisting it owns the offshore territory and that the vessels were sheltering from rough seas.

This week’s announcement between Washington and Taipei also follows China’s adoption of a new Coast Guard Law authorizing its Coast Guard to use force in areas that China claims as its territory, a move seen as potentially raising the possibility of armed conflict in the South China Sea.

The law, which came into force on February 1, encourages China’s Coast Guard to “take all necessary measures including the use of weapons to stop the violation and eliminate the danger” when the country’s sovereign rights or jurisdiction are in “imminent danger of illegal violation.”

China’s neighbors have raised concerns about the revised maritime police legislation, which allows Coast Guard ships to fire upon foreign vessels deemed to be intruding in Chinese territorial waters.

Despite the Chinese government’s insistence that it has no plans to fire on foreign ships, Manila and Tokyo — both of which are U.S. defense treaty allies — have expressed concern about the potential consequences of the law.

The Japan Coast Guard had several run-ins with Chinese maritime police vessels last month in and around the Senkakus Islands. Among the threatening vessels was one armed with a weapon resembling an autocannon, Japanese authorities said at the time.

China’s Coast Guard Law was also among the subjects discussed at last week’s 2-plus-2 meetings in Tokyo, after which the U.S. reaffirmed its commitments to the defense of Japan, including the Senkaku Islands.