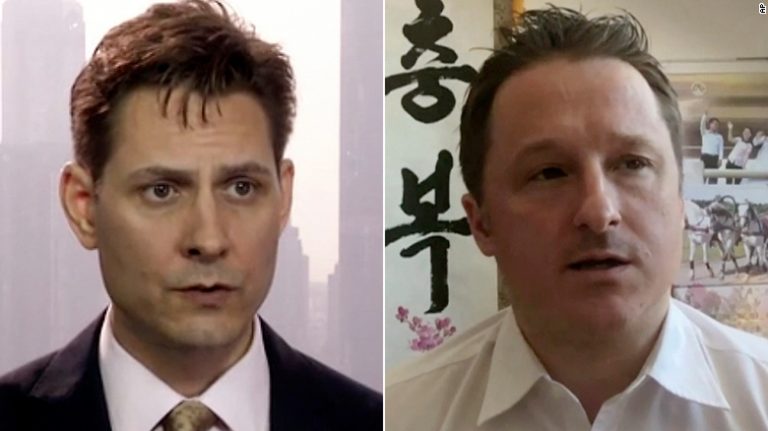 The system, which has been condemned by the UN as tantamount to enforced disappearance, has been imposed on thousands of Chinese human rights defenders, as well as on foreigners, including Canadians Michael Kovrig and Michael Spavor. (Image: via CBC)

Beijing is showing no sign of softness for two Canadian men detained in the country. There was hope that diplomacy could lead to the release of the two men, but now it seems they can’t escape going to trial.

The men, Michael Spavor and Michael Kovrig, have been held captive in China for over two years. Incidentally, they were taken into custody soon after Meng Wanzhou, the Huawei executive, was arrested in Vancouver, Canada, on a U.S. warrant.

According to China’s state-run Global Times: “Kovrig was accused of having used an ordinary passport and business visa to enter China to steal sensitive information and intelligence through contacts in China since 2017, while Spavor was accused of being a key source of intelligence for Kovrig. They are suspected of crimes endangering China’s national security, and have already been prosecuted.”

Mr. Spavor’s trial, which took place in the northern Chinese city of Dandong on March 19, appeared to have lasted just two hours. It is not unusual for some trials in China to take place swiftly.

He appeared in court to face charges of “spying and illegal provision of state secrets abroad,” according to a statement from the court, which also said it would set a later date for the verdict.

Mr. Kovrig was put on trial in Beijing on March 21, which also ended in a matter of a few short hours without a verdict being announced.

China’s courts are known for severe punishments for espionage cases. If judged to be guilty, these two Canadian men could face life-term imprisonment.

As both trials took place, a group of foreign diplomats gathered outside both court buildings, all of whom were denied entry. “This is completely unacceptable as is the lack of transparency in these court proceedings,” said Jim Nickel, Canada’s top diplomat in China.

Following the trials, a Canadian government spokesperson said: “The Canadian government remains deeply concerned by the arbitrary detention by Chinese authorities of Michael Spavor and Michael Kovrig since December 2018 and continues to call for their immediate release.”

Canada says Beijing is carrying out what can be called hostage diplomacy even though the Chinese government claims these two men were doing acts that were threatening national security. Canadian PM Justin Trudeau previously said the arrests came as pure retaliation for the detention of Meng in Canada.

As time is running out, the Canadian government is hoping pressure from the U.S. government can be of use. President Joe Biden said on the issue: “Human beings are not bartering chips. We’re going to work together until we get their safe return. Canada and the United States will stand together against abuse of universal rights and democratic freedom.”

The relations between Beijing and Ottawa are at an all-time low. Both families claim they are innocent and want unconditional release — without any more delay. The Canadian embassy in Beijing said that the lack of access and transparency shown by the Chinese government, in this case, is simply disappointing.

Beijing has claimed that the detention of these two Canadians is lawful, while it called Meng’s case a political one. Incidentally, the prolonged court case of Meng in Vancouver is now in its final phase, with hearings likely to end in May 2021.