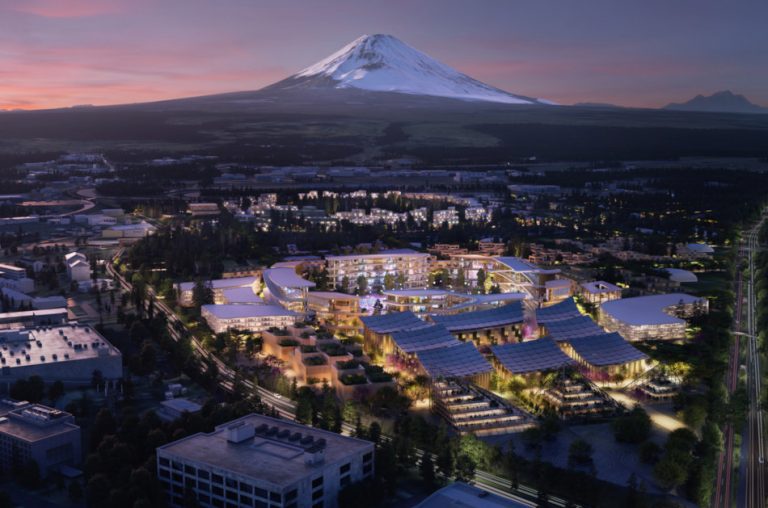 Toyota has started setting up a ‘'first of its kind'’ smart city near Mount Fuji in Japan, which will only have autonomous vehicles on its streets. (Image: via Toyota)

Car companies and technology giants have been developing self-driving car technologies for a few years now and some prototypes are already out. However, Japanese automobile giant Toyota seems to have taken a huge leap forward that may leave its rivals in the dust. According to reports, Toyota has started setting up a “first of its kind’’ smart city. The city, which is being built near Mount Fuji in Japan, will only have autonomous vehicles on its streets. This may sound like something taken straight out of a science fiction novel, but it is actually happening.

The upcoming “Woven City,” which is being built at a 175-acre former Toyota plant, will feature three kinds of streets. One type of street will be dedicated to self-driving vehicles. The other two will be for pedestrians, along with mobility vehicles and regular pedestrians. There will be ample space for pedestrians as well as futuristic autonomous cars. For goods delivery, the city will have separate underground routes.

The driverless cars that will be seen on the streets of the smart city will play multiple roles. These will have advanced ride-sharing capabilities and double up as delivery cars too. But Toyota also plans for them to serve other non-traditional roles and envisions them being used as mobile offices, retail spaces, hotels, and medical clinics. The city streets will be laden with advanced sensors that will regulate the movement of self-driving vehicles. These sensors will also perform many other roles for the benefit of the residents.

In the beginning, the upcoming Woven City will have only 360 residents and a majority of them will be senior citizens. However, gradually, the citizen count will be increased to 2,000. Most of them will be Toyota employees and their relatives. Akio Toyoda, the President of Toyota, said: “I must express my deepest gratitude to all who have provided their whole-hearted support and cooperation to the project through today. The unwavering themes of the Woven City are ‘human-centered,’ ‘a living laboratory’ and ‘ever-evolving.'” (Intelligent Transport)

The plan for setting up the smart city was revealed before the coronavirus pandemic struck in 2020 during the Consumer Electronics Show. It is commendable that despite all the upheaval caused by the pandemic, Toyota has not ditched the plan. The project’s groundbreaking ceremony was held in February, but Toyota did not divulge anything on other aspects of the construction.

New Toyota electric vehicles will run in the smart city

Toyota is likely to deploy its LQ concept electric car and e-Palette prototype vehicle in the upcoming smart city. There will be electricity-driven scooters too. The e-Palette is a boxy autonomous vehicle meant for delivery services and ride-sharing. The LQ concept is a hatchback with advanced AI tech and autonomous-driving capability. It is not known if autonomous cars made by other companies will be allowed to play in the smart city or not.

The smart city is going to be built by Bjarke Ingels. This Danish architect is known as the designer of the Mountain View headquarters of Internet technology behemoth Google. The city is going to be made mostly of sustainable materials. It will be run by renewable energy sources like rooftop solar panels and hydrogen fuel cells. Toyota had earlier said that the city will have in-home high-end robots and health sensors. The buildings, vehicles, and residents themselves will all be linked through a citywide AI network. However, it is not certain if all or only some of these planned features will actually make it into the city.

The Toyota president also said: “Building a complete city from the ground up, even on a small scale like this, is a unique opportunity to develop future technologies, including a digital operating system for the city’s infrastructure,” (Toyota). The project will take some time to be completed, but Toyota says it will serve as a role model for future smart cities.