Struck by a Meteorite, Her Life Was Changed Forever 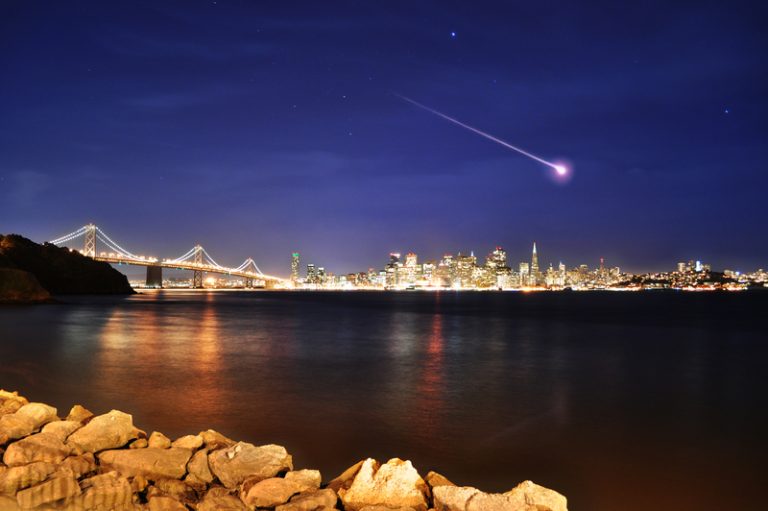 Occasionally, we hear of fragments of a meteorite falling from the sky, hitting someone, or a village. (Image: Artemk23 Dreamstime)

Seeing a “shooting star” silently glide through the night sky, even though it may last only a matter of seconds, is a glorious and awe-inspiring sight. Occasionally, we hear of fragments of meteorites falling from the sky and hitting someone or a village. There are also stories of people selling space rock fragments and getting rich overnight.

The first authenticated account of a meteorite hitting someone became a tale of good fortune and then misfortune. This involved an American lady named Ann Hodges. Ann luckily survived the strike relatively unscathed and she could have become very well off overnight, but this incident completely changed her and ruined her life. The ending of Ann’s story is bittersweet and there are big lessons for us all.

A meteorite crashes through her roof

Ann Hodges was 34 years old at the time. She was a regular housewife residing in Alabama in the United States. Her daily routine was doing household chores and taking care of her husband and children.

At about 12:30 p.m. on November 30, 1954, it was a sunny day and Ann was napping cozily on the sofa. Suddenly, there was a loud crashing noise that shook her awake. A chunk of black rock smashed through the roof of her house. It hit and broke her large, wood frame radio and then bounced off her hip. The severe pain left Ann dazed. When she regained her composure and checked herself, she found that the left side of her abdomen was badly bruised.

Her neighbors heard the noise and rushed over to see what had happened. When they saw what looked like a rock the size of a big fist, they first thought that it was a prank by some mischievous kid. As for Hodges, she did not think much of it, considered herself unlucky, and wondered who had played such a joke on her. Fortunately, the injury inflicted on her was not serious or life-threatening.

When Hodges’ husband, who was an experienced mine worker, returned home, he noticed that the object was no ordinary rock. Judging from the impact when it smashed through the roof, he thought right away that it was a meteorite.

On the following day, Ann’s husband sent the rock fragment to a professional institute for analysis and the result confirmed that it was indeed a meteorite.

According to data records, the Sylacauga meteorite weighs approximately 8.5 pounds (3.86 kilograms) and has a diameter of approximately 7 inches (17.8 cm). If it was not for the fact that the meteorite was slowed down as it moved through the pressurized atmosphere and then was further slowed down as it smashed through the roof and hit the radio before bouncing off Ann’s hip, the injury inflicted could have been fatal. Hodges was very lucky to have survived after being hit by the meteorite.

Ann subsequently became a celebrity and received much publicity and attention from various local and national media. Even today, meteorites are rare treasures for collectors. In the case of Ann Hodges, she was approached by buyers, and the price they offered kept rising.

She saw this interest as an opportunity to become rich overnight. No matter how high the price offered by each buyer, she would always feel that the next bid would be higher. She let the buyers compete with each other and the one who offered the highest price would win the bid.

Seeing that his wife was so obsessed with money, her husband tried to persuade her to sell the meteorite and get her life back on track. Unexpectedly, Ann, who had always been mild-tempered, quarreled with her husband several times over this matter. Her husband could not tolerate her change of behavior any longer and divorced her in a fit of anger. Ann’s parents were also angry with her and their relationship turned sour.

For the sake of just one small space rock fragment, Hodges chose to isolate herself from her family and became a lonely person.

Problems, complications, and challengers for ownership of the meteorite

No matter how high the prospective buyer’s bidding offer was, she was never satisfied. It seems that she only wanted to become rich. This attracted the attention of other players who wanted to cash in on the meteorite’s landing.

In the midst of stretching out the bids and settling on a buyer with the highest bidding price, other complicated issues related to determining the meteorite’s ownership cropped up.

The U.S. Air Force sent its people to Hodges’ house. They listed some evidence and regulations stating that any object that falls from the sky has to be under the control of the U.S Air Force and they took away the meteorite.

In a fit of anger, Hodges went to the media and reported on the uncalled-for action by the U.S Air Force. This attracted criticism from the public and finally, the U.S Air Force returned the meteorite to Hodges.

Then there was Hodges’ landlady. The Hodges at that time lived in a rented farmhouse, so their landlady thought that the meteorite belonged to her. She hired a lawyer and sued Hodges, claiming that the meteorite was hers since it had fallen on her property.

Hodges defended her ownership, claiming that the meteorite hit her, so it should belong to her. The case dragged on for some time and was eventually settled out of court, with Hodges compensating the landlady US$500 for the rock and repair costs.

Because all the toing and froing about the rock went on for some considerable time, interest in the meteorite waned and no one wanted to buy the rock.

Ann regretted her actions after going through all the painful experiences. In the end, everything was so stressful for her that she decided to donate the meteorite that she once regarded as a treasure to the University of Alabama Museum of Natural History. The rock, now popularly known as “Hodges Meteorite,” is still on display in the museum.

In her final years, the ordeals and challenges took their toll on her health and relationships. Ann had no one to take care of her. She suffered from emotional disturbances and had to move into a nursing home, where she spent her final lonely days until her death at the young age of 52.

Mrs. Hodges was the first human being to have been hit by a meteorite and authenticated. She did not realize at the time that it was a “shooting star” that fell from the sky into her lap. It traveled from the far ends of the Cosmos to bless her life and her family, rather than a mischievous rock that came to ruin her life. Ann came to realize that she misjudged the unique arrival of the meteorite into her life, overplayed her winning hand, and lost everything. Her sudden change of behavior was regrettable and totally out of character for her.