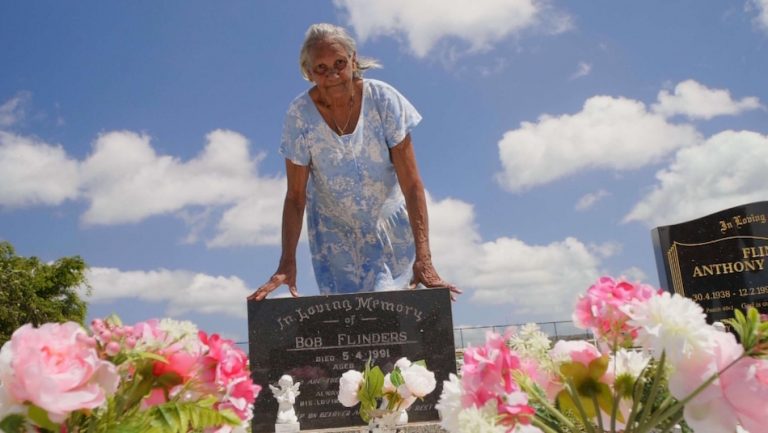 'Wawu Divine Hope' explores the spirit of an Aboriginal town in Far North Queensland’s Cape York Peninsula through a special annual Easter event in which the people transform their graveyard into a garden. (Image: via Wawu Divine Hope film)

The film Wawu Divine Hope tells the story of Hope Vale, which is situated in Australia’s Cape York Peninsula. Here, the Guugu Yimidhirr people are deeply connected to their Aboriginal culture and the divine. Every year, they celebrate a tradition in the week leading up to Easter where the community comes together to transform the cemetery into a garden filled with lights and music.

Families come from near and far to clean the church and tidy and decorate the cemetery, add fresh flowers, and adorn it with lights. On Sunday morning, they have a dawn church service in the cemetery and everyone sings church songs together in English and in their traditional language. This Easter tradition is one that reflects who they are and what they’ve been through as a people.

‘Wawu Divine Hope’ was made in Caden’s hometown

Although the idea for the film was not a new one to Caden, trying to get it made and secure funding was a last-minute decision. Even with the deadline of Easter fast approaching, incredibly, everything fell into place.

And though this was the monsoonal wet season and it poured with rain most of the night, in the daytime when it came time to shoot, they had clear skies. Being shot in his hometown, Caden had the connection and contacts to help pull it all together.

The event is captured beautifully in this 27 min film, Wawu Divine Hope, by director Caden Pearson with spectacular cinematography by Randall Wood.

Many of the Guugu Yimidhirr elders are survivors who were forcibly removed from Hope Vale and later returned. This includes Aboriginal elder Dorothy Rosendale, who tells in the film about the tradition they have in the cemetery: “It’s not the dead that we are going to worship; we are worshipping God and thanking him for the time we had with them before they left us.”

“A few years ago while on the way to my aunt’s house, I saw fairy lights flashing in the dark as I passed by Hope Vale’s cemetery. I was amazed to think electronic technology had made its way into this humble no-tech tradition. That’s when I knew it was time to make a film about it.

“Wawu Divine Hope is a film about the spirit of my people, the Guugu Yimidhirr Warra nation who live in the small Aboriginal village of Hope Vale in the southeastern corner of Cape York Peninsula in Far North Queensland. Wawu means ‘spirit,’ ‘soul,’ or ’emotions’ in Guugu Yimidhirr. This unique tradition began as a way to pay respect to the old people who first built Hope Vale in the 1950s after they were displaced during World War 2.

“And I think this tradition is when you can really see the wawu of our people on display. Easter is a deeply meaningful time for the community to be together. We come together at the cemetery and people go all out cleaning and decorating the graves of their loved ones.

“We help each other out, sharing paint, wheelbarrows, rakes, and hoes. Weeds are pulled, headstones polished, river sand spread around, and fresh flowers arranged on the graves. Then a dawn service is held at the cemetery on Easter Sunday. “

Watch the full film on SBS on Demand here.