How the Chinese Phoenix Got Its Feathers 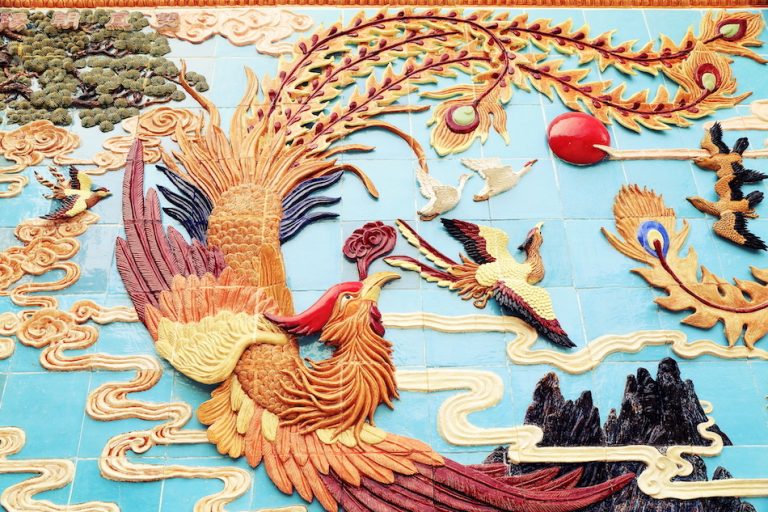 The Chinese phoenix, also known as Fenghuang, is a mythological bird that symbolizes high virtue and grace. (Image: Alakoo via Dreamstime)

The Chinese phoenix, also known as Fenghuang, is regarded as the epitome of all birds, an omen that foretells harmony, and a symbol of high virtue, prosperity, compassion, and grace. Fenghuang is believed to have been born from the sun (or out of fire) and is considered the ruler of all birds, for it embodies the characteristics of many other feathered species.

The figure of the phoenix appears on objects dating from thousands of years ago at the very, very beginning of Chinese culture. Some sources claimed that this mythic bird has its roots in a prehistoric, possibly ostrich-like huge bird that lived a long time ago in China.

For generations, the Chinese have named food, girls, and musical instruments after the Chinese character for the phoenix, having an expectation that they will be as splendid as the phoenix.

Fenghuang, (Chinese phoenix) is one of three early Chinese mythical animals, the others being the unicorn and the dragon. A phoenix and dragon are often portrayed together, as they represent a balance of forces — the Yin and the Yang — that harmonize the world. The phoenix is also known as the “August Rooster” since the bird sometimes takes the place of the Rooster in the Chinese zodiac.

The phoenix does not tell lies or abuse power; it is a kind creature and said to only consume morning dew so as not to cause harm to any animals or plants.

In troubling times, the phoenix mythology suggests it flies to the heavens so that its presence can only symbolize peace.

Legend of how the Chinese phoenix got its feathers

The Chinese phoenix did not always look like the colorful firebird that we all recognize. In fact, it started out as an unremarkable bird with very ordinary plumage. But it had one advantage — it worked very hard.

Unlike other birds that loved to eat and play all day, the phoenix was very busy from dawn till dusk. It would pick up the fruits and seeds discarded by other birds and store them in a cave.

When the forest encountered a severe drought, the birds could not find any food and were starving to death. The phoenix hurriedly opened its cave and shared the stored fruits and seeds with all the other birds.

After the drought, every bird picked out the most beautiful feather from its body and made a brilliant coat for the phoenix, and unanimously elected the phoenix as the ruler of birds.

From then on, birds from all corners of the Earth would gather every year to celebrate the phoenix’s birthday. This day became known as “When the birds worship the Phoenix.”