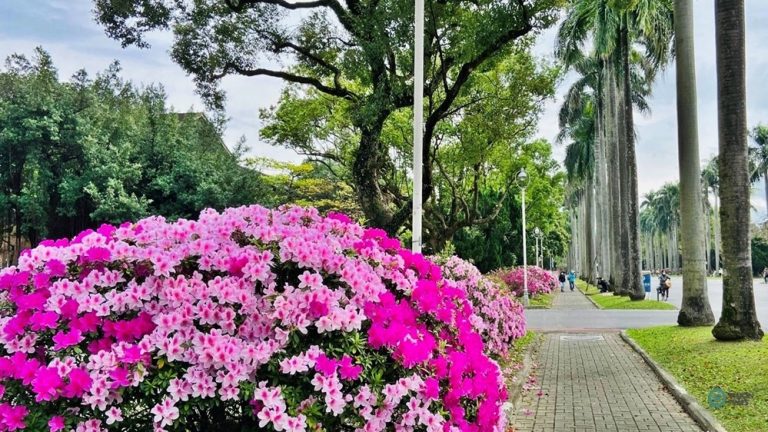 Taipei has long been prized for its beautiful azaleas, and the azalea was voted Taipei’s city flower in 1981. So it’s only natural that they celebrate the Taipei Azalea Festival.

Aiming to further build the capital of Taiwan into a city of azaleas, the Taipei City Government has planted approximately 100,000 flowers per year since 1997, and the total number of azaleas in Taipei is expected to reach 850,000 by the end of 2021.

Please watch the following video of the 2021 Taipei Azalea Festival.

To further promote azaleas and make the city flower become closely connected with the city’s image — as cherry blossoms are to Tokyo and tulips are to Amsterdam — the first Taipei Azalea Festival was inaugurated in 2017.

In view of the fact that the azalea is the flower of both Taipei and the prestigious National Taiwan University (NTU), the city government thus came up with the idea of holding the Taipei Azalea Festival in conjunction with the NTU Azalea Festival four years ago.

To foster the feeling of spring as well as promote tourism and leisure, the Taipei City Government has held a series of activities during the Azalea Festival every year.

The 2021 Taipei Azalea Festival kicked off with the opening ceremony at Daan Forest Park on March 14 and runs for 21 days until March 31. One of the highlights of the festival is the Azalea Concert. Attended by Taipei City Mayor and many others, the concert was held at the Park on March 21, to which a number of popular singers and bands were invited to perform popular songs and music.

Another good thing about the festival is that the city government has collaborated with 128 shops to hold a stamp rally. Visitors accumulating 6 or more stamps from any of these shops are eligible for a raffle for prizes ranging from hotel vouchers and electric scooters to other exquisite items.

Additionally, Taipei residents are invited to have picnics in Daan Forest Park throughout the festival to have fun with their family members or friends, while appreciating the charm of the blooming azaleas and other beautiful flowers, such as hydrangeas and Lupinus.

During this time of the year, there is always an abundance of colorful and vibrant azaleas blooming on the two sides of the famous Royal Palm Boulevard (椰林大道) stretching over 600 meters (2,000 feet) from the main entrance to the main library.

In fact, the NTU Azalea Festival has been held since 1997, and the NTU campus has won the reputation as the “Azalea City.”

During the festival, a plethora of blooming azaleas is displayed on the spacious palm boulevard. Besides, a variety of other activities are held throughout the festival, such as the online opening ceremony, lectures, a department expo, a souvenir shop, various guided tours, DIY sessions, and the exhibition on azalea varieties at the university’s Horticulture Exhibition Greenhouse, etc.

With the Taipei City government’s concerted efforts and the favorable weather conditions, azaleas are literally ubiquitous in Taipei. In addition to Daan Forest Park and National Taiwan University, many other places around the city are also great spots to appreciate beautiful azaleas in spring, such as the National Sun Yat-sen Memorial Hall Park, the National Chiang Kai-shek Memorial Hall Park, Yangmingshan National Park, and some main boulevards in Taipei, including Reai Road, Xinyi Road, Mingchuang East Road, etc.