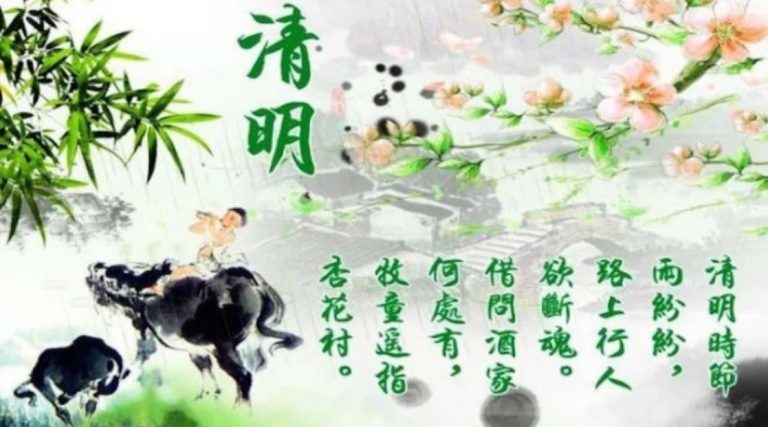 In this poem, Du Mu describes a lonely traveller still on the road while others are already reunited with their families. The traveller's state of mind is echoing by the unceasing rain. Then, a sense of hope is conveyed when a shepherd boy points the traveller to the direction of an inn in Xing Hua Village where he is able to find shelter and lodging as well as Sakura wine (Image: secretchina.com)

The Qingming Festival is also known as the Tomb-Sweeping Day or the Pure Brightness Festival. It falls on April 4, 5, and 6 in the Western calendar. The number “four” is a homophone for the word “death” in Chinese. So double numbers (such as the date 4/4) are usually not considered auspicious. However, April 4 is considered appropriate for honoring departed ancestors.

It’s an important national holiday when families gather to honor the dead, and celebrate the arrival of spring.

These photos were taken in Shunde in Guangdong Province, and show some of the rituals performed by Chinese people, such as looking after the graves of the deceased, and burning paper effigies in their memory.

Many poets and artists over the centuries have been inspired to try and capture the essence of the holiday in their work.

A famous Tang Dynasty poet, Du Mu, penned this poem around the festival time (see the Chinese version of this poem at the article’s feature image):

It drizzles endlessly during the rainy season in spring,

Travellers along the road look gloomy and miserable.

When I ask a shepherd boy where I can find a tavern,

He points at a distant hamlet nestling amidst apricot blossoms.

There’s a famous scroll painting by Song Dynasty painter Zhang Zeduan called: “Along the River on Qingming Festival“, it is said to celebrate not only a festival, but an entire culture. The painting is nicknamed “China’s Mona Lisa” as it is considered to be the most renowned work among all Chinese paintings.

Taqing: ‘To walk on the green grass’

The Qingming Festival is the only statutory holiday of the traditional 24 solar terms. The Qingming observance originated way back in ancient China. So during this traditional holiday, Chinese people thank their ancestors and cherish the memory of departed relatives. It is a time used to cultivate filial piety and to reconnect with family members.

Besides demonstrating respect to their ancestors, it is also a time for people to celebrate the joy and renewal of spring, and farmers would traditionally prepare for new growth in the fields.

People take this opportunity to travel together and spend time outdoors going on long walks in parks and the outskirts of the city. Children play together and use willow branches to make things. They pick wildflowers and are free to play as much as they want. So there’s another nickname for Qingming festival and that is “Taqing,” which translates to “walk on the green grass.”

There is lots of fun and traditional activities that families like to enjoy on their spring outing. People enjoy planting trees, flying kites, swinging on swings, or playing an ancient Chinese soccer game called Cuju.

Traditional Qingming Festival foods are sweet green rice balls, peach blossom porridge, crispy cakes, Qingming snails, and eggs. Qingming is also a significant date for tea culture, as it divides the dates between picking green tea. The tea picked before Qingming is called Mingqian tea, and is famous for its tender buds and fragrant bouquet.

A time to celebrate the brightness of the living world

The Qingming Festival literally translates as “pure and bright festival.”

清 (qīng) carries the meanings of being pure, clean, clear, and innocent

明 (míng) refers to being bright and clear, as well as intelligent and brilliant.

All living things grow at this time, and all are qing (clean) and ming (bright). — Qing Dynasty text

So although the festival starts with the dead, it then becomes a time to celebrate rebirth and all that is living and bright. Just like the cycle of nature, a harsh winter is followed by a pure, bright spring.