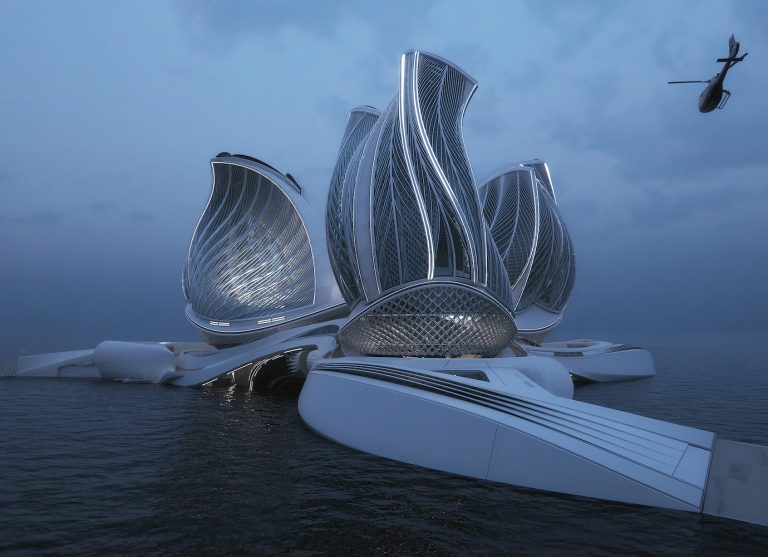 The amount of plastic waste accumulated in the ocean is a major threat to marine ecosystems. In a recent development, a prototype ocean cleaning setup made by a Slovak designer has drawn the attention of environmentalists. The ocean cleaning prototype designed by Lenka Petráková has fetched the designer the top award in a high-profile architectural competition.

Petráková has named the prototype The 8th Continent. It is a uniquely designed floating station meant to effectively clean plastic and other waste deposited in seawater. Petráková’s prototype won the Grand Prix Award for Architecture and Innovation of the Sea 2020. It is given by the Foundation Jacques Rougerie, which rewards visionary projects on environmental issues.

The following is a video of the operation of The 8th Continent:

Petráková’s model is made up of petal-shaped buildings based on tentacle-type platforms. The petals are interconnected. These components work in sync to gather plastic waste from seawater and then that is turned into recyclable material. Interestingly, the prototype is not limited to just cleaning ocean waste. It also includes a research and education setup for exploring marine environments and has a greenhouse for growing plants without using soil. The facility has amenities for researchers to reside in it as well.

The 8th Continent to be self-sufficient

The prototype is meant to be self-sufficient and will use the marine environment for sustenance. The buildings are positioned in a way that air can pass through them. This will allow them to cope better with strong gusts of winds. It also has provisions for harnessing both solar and tidal energy. Petráková said: “Although it is an unbuilt project, as Jules Verne said, anything one man can imagine, another man can make real. And I believe today is the time to imagine a cleaner, environmentally more sustainable future and ways to achieve it with technical, architectural, and artistic creations, to allow us to build them for ours and the world’s better tomorrows.”

The 8th Continent’s structure is meant for use in the Pacific Ocean. There are 5 sections: living quarters, greenhouses, a research and educational section, a collector, and a barrier. The barrier collects waste from the sea surface, which is then segregated and biodegraded in the collector section.

Petráková works as a senior designer at London-based Zaha Hadid Architects. The prototype’s concept was developed initially at the Vienna-based University of Applied Arts. Petráková said she was inspired by marine life and so her prototype is much like living aquatic organisms and self-sustainable.

Still, according to National Geographic, not all plastic waste floats on the ocean surface. Denser debris can sink centimeters or even several meters beneath the surface. Thus it remains to be seen how effective The 8th Continent is at removing significant volumes of plastic waste. However, environmentalists have hailed it, saying it is a step in the right direction.