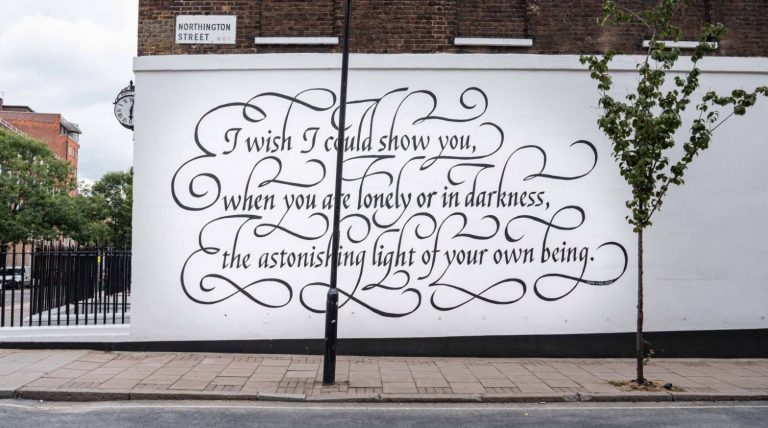 If you happen to walk in London's Holborn neighborhood, you will come across beautiful calligraphy with equally beautiful words entitled 'I Wish.' (Image: Facebook)

There is never not a good time to read a motivational quote. Imagine walking down the street, engrossed in some sorrow, and suddenly you come across a wall that has a beautiful poem written in calligraphy that uplifts your mood and it seems like a sign from the universe. And, given the way 2020 turned out, such motivational signs from the universe will be more welcoming.

If you happen to walk in London’s Holborn neighborhood, you will come across beautiful calligraphy with equally beautiful words entitled I Wish. This exquisite piece is created by UK-Based artist Seb Lester. His latest works are inspired by the 14th-century Persian poet, Hafez.

The art of calligraphy is an ancient one. It uses brush strokes to give a certain expression to words. In a way, the essence of the words is expressed better when written in calligraphy. This art form originated in ancient China, in the Shang Dynasty, but it was the amalgamation of Arabic/Persian and calligraphy that gave the art a new dimension.

If you have read Persian poems, you will know the depths to which the words take you. Persian poets such as Rumi, Hafez, Khayyam, all have spoken so greatly about love and life, and such motivations are hidden in the works to create a sense of self-worth and positivity within the person reading it.

Consider this verse by Rumi:

Blossom in the sky;

Peace in the Infinite;

At peace am I.

From my heart arise;

My heart, dark and cold,

Flames with my sighs.

The poem is not only painfully beautiful, but it also ignites a certain hope. If you come across this poem in calligraphy, with the e’s being drawn out and within themselves and the i’s being curled, the poem will have a whole new meaning of beauty where pain and hope meet. This is what calligraphy does to motivational poems, quotes, and verses — it highlights the emotion the words are trying to convey with a more artistic take.

While there are many creators of artistic calligraphy on the streets — a form known as street graffiti — it is Seb Lester’s take on the usage of Persian poems that creates an instant connection with the place and the reader. His recent mural of Hafez’s I Wish has drawn worldwide applause and appreciation. The poem is simple, and it is this simplicity that draws people to the meaning conveyed by the poet. Adding to the words with his strokes, Lester has created an even more haunting depiction of the poem that sends goosebumps through your body because it makes you realize that you are not alone in your sufferings.

Seb, or Sebastian, Lester was born in 1972 in London. His works are known not only as murals, but also for designing brand prints and calligraphy for social media. His most notable works include Penguin’s imprint Hamish Hamlinton’s redesigning four popular book covers, one of which was Salinger’s famous The Catcher of the Rye. He has created various typefaces, one of the most renowned being the Neo Sans that was used for the 2010 Vancouver Winter Olympics. In fact, Intel also uses a customized version of the Neo typeface. Lester received formal training in graphic designing from London’s Central Saint Martins.

He often begins his work by looking for some motivational and inspiring poetry or prose so that his focus on his project gets reflected. His love for poems has led him to 14th century Persia, known for producing some of the best poets in the world. Even today, a Rumi or a Hafez is read and reread over contemporary and modern works. The works created by these Persian poets go beyond time and culture. If you take up any piece of Persian poetry and you can relate to it, no matter that it was written in the 14th century. It is this inspiration that you can witness on 10 John St, Holborn, London. This mural was created by Lester when he worked with the London Mural Festival.

Having such murals on quieter streets is a booster. When someone walks down a street and they come across such a work, it automatically makes the reader feel better, for they know that someone out there too faced and overcame a sorrow like the one bothering them now.