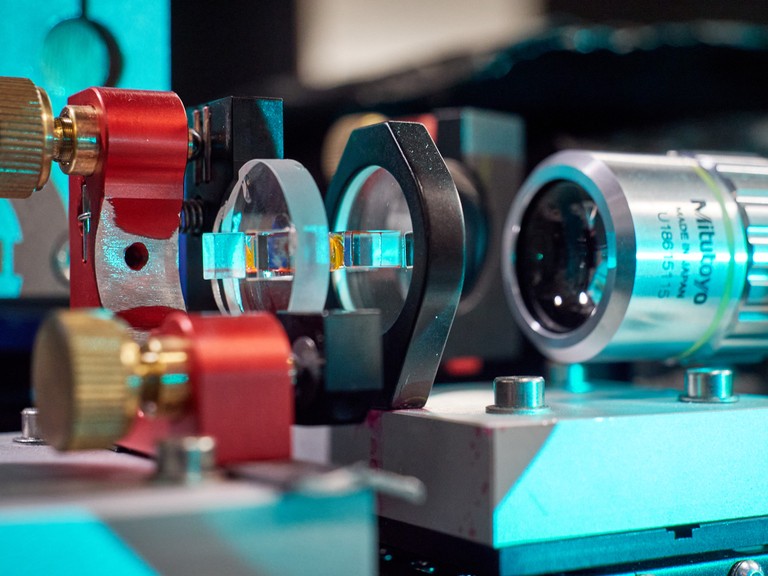 The optical microresonator filled with dye solution (yellow). On the right is a microscope objective used to observe and analyze the light emerging from the resonator. (Image: Gregor Hübl via University of Bonn)

A single “super photon” made up of many thousands of individual light particles — about 10 years ago, researchers at the University of Bonn produced such an extreme aggregate state for the first time and presented a completely new light source. The state is called optical Bose-Einstein condensate and has captivated many physicists ever since, because this exotic world of light particles is home to its very own physical phenomena.

Researchers led by Prof. Dr. Martin Weitz, who discovered the super photon, and theoretical physicist Prof. Dr. Johann Kroha have returned from their latest “expedition” into the quantum world with a very special observation. They report a new, previously unknown phase transition in the optical Bose-Einstein condensate. This is a so-called overdamped phase. The results may in the long term be relevant for encrypted quantum communication. The study has been published in the journal Science.

The Bose-Einstein condensate is an extreme physical state that usually only occurs at very low temperatures. What’s special is the particles in this system are no longer distinguishable and are predominantly in the same quantum mechanical state, in other words, they behave like a single giant “superparticle.” The state can therefore be described by a single wave function. In 2010, researchers led by Martin Weitz succeeded for the first time in creating a Bose-Einstein condensate from light particles (photons).

Their special system is still in use today. Physicists trap light particles in a resonator made of two curved mirrors spaced just over a micrometer apart that reflect a rapidly reciprocating beam of light. The space is filled with a liquid dye solution, which serves to cool down the photons. This is done by the dye molecules “swallowing” the photons and then spitting them out again, which brings the light particles to the temperature of the dye solution — equivalent to room temperature. Background: The system makes it possible to cool light particles in the first place because their natural characteristic is to dissolve when cooled.

Phase transition is what physicists call the transition between water and ice during freezing. But how does the particular phase transition occur within the system of trapped light particles? The scientists explain it this way: The somewhat translucent mirrors cause photons to be lost and replaced, creating a non-equilibrium that results in the system not assuming a definite temperature and being set into oscillation. This creates a transition between this oscillating phase and a damped phase. Damped means that the amplitude of the vibration decreases. Lead author Fahri Emre Öztürk, a doctoral student at the Institute for Applied Physics at the University of Bonn, said:

“The overdamped phase we observed corresponds to a new state of the light field, so to speak.”

The special characteristic is that the effect of the laser is usually not separated from that of Bose-Einstein condensate by a phase transition, and there is no sharply defined boundary between the two states. This means that physicists can continually move back and forth between effects. Study leader Prof. Dr. Martin Weitz said:

The researchers plan to use their findings as a basis for further studies to search for new states of the light field in multiple coupled light condensates, which can also occur in the system. Fahri Emre Öztürk said:

“If suitable quantum mechanically entangled states occur in coupled light condensates, this may be interesting for transmitting quantum-encrypted messages between multiple participants.”