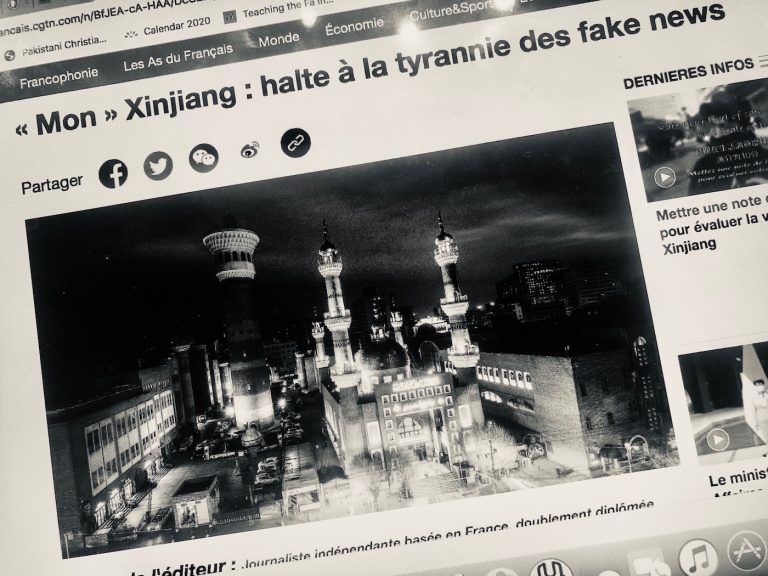 A digitalized photo of the article translated to be ‘My Xinjiang: Stop the tyranny of fake news’ as published on the French language version of Chinese state-run broadcaster CGTN. (Image: Nspirement)

A list of Chinese Communist Party (CCP) fakery would be endless, but one of the latest examples is the apparent use of a fake French journalist attacking Uyghur genocide reports.

In an article published by the regime’s propaganda broadcaster CGTN, a so-called French journalist identified as “Laurene Beaumond” attacked international concerns that genocide is being carried out against the Uyghur Muslim people.

In “her” article, “Beaumond” asserted that claims of concentration camps, sterilization, the erasure of culture, and forced labor in Xinjiang were baseless and made by people who have not been to the region.

“I had the opportunity to visit the region many times between 2014 and 2019, and I do not recognize the Xinjiang they describe to the one I know,” the so-called author wrote in the article headlined My Xinjiang: Stop the tyranny of fake news.

CGTN describes Laurene Beaumond as a “7-year China resident” who is a freelance journalist who has worked with various Paris-based media outlets. CGTN further says she has a double degree in history and holds a master’s degree in journalism.

But France’s Le Monde newspaper wasn’t able to find evidence that a Laurene Beaumond actually exists. In its article When Chinese television CGTN invents a French journalist, the newspaper found that the French office that issues journalists’ ID cards has zero records of “her” on their registry.

Le Monde also found no proof of “her” working in France and they said the language used in the article was typical of CCP propaganda, leading them to come to the conclusion that Laurene Beaumond is a mere fabrication.

Meanwhile, the regime has tried spinning its way out of what was becoming a charade.

The matter was recently brought up by a member of the foreign press in Beijing who ended up being berated by Chinese Foreign Ministry spokeswoman Hua Chunying for suggesting that Laurene Beaumond didn’t actually exist. The questioning, Hua said, “reflects unhealthy thinking.”

The CCP’s propaganda outlet further added that the so-called French writer will no longer use the Laurene Beaumond pseudonym due to the “disproportionate media exposure and the harassment” that the mystery writer has “suffered.”

CGTN is a big part of the Chinese communist’s massively funded propaganda efforts overseas, but it suffered a setback in February when its license in Britain was withdrawn because its state-backed ownership structure broke British law. Last month, CGTN was also fined £225,000 by the UK’s media regulator for its bias in coverage of the pro-democracy Hong Kong protests and for broadcasting forced confessions.

For more on how forced confessions on TV are used by the Chinese state, watch this video below.